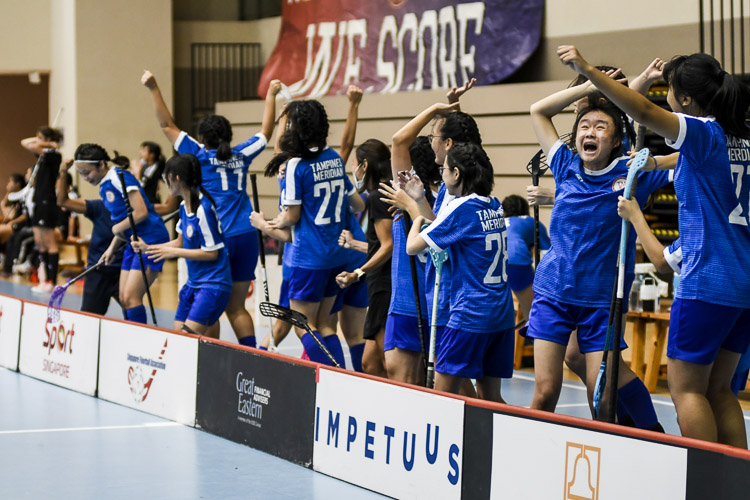 Our Tampines Hub, Tuesday, May 24, 2022 — With all still to play for in the A Division girls’ floorball final against defending champions Victoria Junior College (VJC), Tampines Meridian Junior College (TMJC) coach Jatin Nair sent out a rallying message to his charges during the second interval: “The team is only as strong as the relationships within the team.”

It was a recurring theme that had driven the TMJC girls throughout a short four-month run-up to the competition, and they duly delivered on court to come out 2-1 victors in the final, sealing the school’s first title since the merger between Tampines and Meridian JCs.

“If the relationships (within the team) are strong, they would surely fight for one another, and they just showed it… they were running and running, they didn’t even stop when I asked them to change lines… so I have nothing to say, I am super proud of them and they really deserve it,” said Jatin, who has been coaching at the school for about four years since their last triumph as Meridian JC in 2018.

VJC had won the title in 2019 — with TMJC only finishing third then — before the Covid-19 pandemic forced the National School Games (NSG) into a two-year hiatus.

Siti Mikhaella (#9), who scored TMJC’s winning goal with 26 seconds left in the penultimate period, echoed her coach’s sentiments when asked about her greatest takeaway from the season.

“We can’t do anything without one another… because floorball is a team sport, regardless of whether you’re a player, teacher, coach or even a supporter… we still need one another to succeed,” said the first-year TMJC student, who has been playing the sport since she was in Primary 4, representing West View Primary and Tanjong Katong Secondary.

With most of his players JC1 students, TMJC coach Jatin explained how there was no talk about being champions since the start of the year, but instead they took the direction of character-building and forging strong bonds within the team.

“We talked about setting a tone for the future years, so we were working a lot on character, discipline, and definitely hard work,” he said. “The emphasis was us being friends rather than teammates for now, and setting the tone for the new batches.”

“When the (JC1 players) came in, it was a big transition but it was seamless… the whole project in TM floorball is quite outstanding because we focus a lot on the camaraderie aspect first. We only had about two months to prepare, we started a bit late,” he added.

TMJC’s first title adds to predecessors and traditional powerhouses Meridian JC’s seven A girls’ trophies since 2007, the first year that floorball was sanctioned by the Ministry of Education’s Co-Curricular Activities Branch as it was called then. VJC has three titles within this same period spanning 14 editions of the championship.

Both finalists had gone unbeaten across this year’s preliminary stage, as TMJC edged out Catholic Junior College 1-0 and VJC dispatched 2019 finalists River Valley High School 5-1 in the semis.

The opening period in the final proved to be scoreless, with the two sides approaching their play cautiously. They slowly got into their groove in the second period of 12 minutes, and the floodgates finally opened with 4:26 to go.

Dragging a shot from outside the D, Nyimas Herlena (TMJC #19) saw the ball fumbled by the VJC custodian before trickling into the net, cueing hysterical celebrations from the TMJC bench and the crowd in the stands.

But as the seconds ticked down before the final interval, Mikhaella (TMJC #9) found herself a metre away from goal with only the goalkeeper to beat, and she promptly struck the ball into the roof of the net to put her side 2-1 up in what turned out to be the all-important winning flick of a floorball stick.

“I just couldn’t stop thinking about how our journey here is not to be wasted… people expect a lot of things from us because we are always in the top four, and to be able to score the second goal, it just made me really, really happy,” said Mikhaella (TMJC #9) of her thoughts after that crucial strike.

VJC searched for the equaliser in the last period but circumstances did not help their cause when they were shorthanded from 7:30 to 5:30 with a player sin-binned.

As pressure mounted, VJC took a gamble after a time-out with 1:53 left on the clock, replacing their goalie with an extra offensive player. This tactic nearly backfired with Zulhaira Nafira (TMJC #14) almost scoring into a gaping net, as the girls in black played it safe again but continued pouring forward for that elusive second goal.

With an all-or-nothing one second to go, VJC were given an equalising opportunity with a free-hit, but nothing could go past the blue defensive wall any further as TMJC secured a hard-fought victory to lift the champions’ trophy.

“I’m super proud of my team… we have come a very long way, and we have put in a lot of effort in the past four months,” said TMJC captain Jann Tan (#7).

“The start (of the season) was pretty rough, and the team was actually not (fully) formed four months ago, but we have made a lot of improvement within this short period of time, and I’m proud to say that we have really deserved this trophy,” added Jann, who started playing floorball five years ago in St. Hilda’s Secondary.

Meanwhile, VJC captain Charmaine Liew (#7) was still all smiles and had nothing but pride for her side’s journey throughout a season of ups and downs.

“I think throughout the NSG, my team played very well,” said Charmaine (VJC #7). “We stuck to our game plan, we were very determined to win this match, but unfortunately it was not on our side today.”

“But I would like to give props to my team for pushing well, and despite falling a goal behind during Period 2, we continued to fight throughout Period 3, which is something I would like to give it to my girls… for being very determined,” said the former CHIJ Katong Convent student.