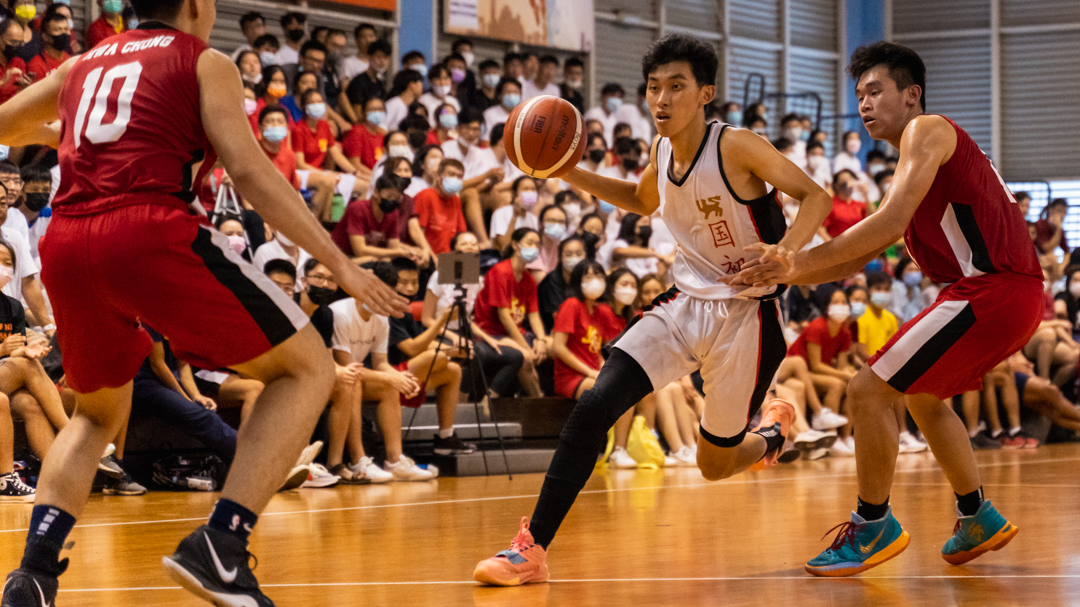 NJC’s captain and MVP Ray Chan (in white) goes past the HCI defence. He scored a game-high 12 points in the final as NJC sealed a historic first A Division boys’ basketball title. (Photo 1 © Bryan Foo/Red Sports)

Singapore Basketball Centre, Monday, May 23, 2022 — Embraced by his schoolmates and supporters after the A Division boys’ basketball final against traditional heavyweights Hwa Chong Institution (HCI), National Junior College (NJC) captain Ray Chan (#8) still could not wrap his head around the scenes that had unraveled.

His NJC team had turned around an early HCI lead and survived a late onslaught from their opponents to bag their school’s maiden basketball title, in only the school’s second appearance in a championship final.

With a game-high 12 points, the Most Valuable Player (MVP) had led the boys in white to a 41-33 win against their counterparts in red to retain their 100-percent record over seven games in the competition, but was quick to deflect praise directed at him.

“I’m not really a big fan of my own performance… it is always a team effort for basketball,” Ray (NJC #8) said. “My team did it today, so I’m very proud of them.”

“Actually some of us came into NJ without knowing how to play basketball… but we all came together, we had a goal in mind which was to win, and we trusted one another… and we did it eventually,” added Ray, who has been playing with most of his teammates since five years ago in the school that offers the six-year Integrated Programme (IP).

Opposite number Gao Shan (#8), the HCI captain, recalled the challenges faced by his team throughout a pandemic-stricken season and credited NJC’s performance.

“It’s been exciting, because for the longest time we’ve been playing 3v3 or 4v4 basketball, and it’s been a while since we’ve had this adrenaline from the 5v5 situation, so we’ve had to adapt to it,” said Gao Shan, who scored a team-high eight points in the final.

“While it did pose a challenge, we managed to overcome it and we worked hard… but at the end of the day, we feel that NJC definitely worked harder than us during this game, and they deserved it.”

HCI, powerhouses with 10 A boys’ basketball titles since 2003 but still chasing their first trophy since 2014, drew first blood from tip-off and went 4-0 up in quick succession to prompt an NJC time-out just 45 seconds into the final.

Both teams took turns on the offensive for the first four-and-a-half minutes of the second quarter to no change in scoreline, before Lim Yi Heng (HCI #10) reduced the deficit to two but failed to take advantage of the and-one play.

The rest of the quarter saw NJC sinking basket after basket to go into half-time 17-8 up, capped off by a three from Justin Eggen (NJC #27) with 10 seconds left on the clock.

Halfway into the third period of 10 minutes, both sides had traded hoops until the scores read 23-15, with Bryan Wu (HCI #18) driving aggressively into the paint to cut the deficit to seven and cue another NJC time-out. But it did not take long before the momentum swung back in NJC’s favour, as MVP Ray (NJC #8) sunk in two 3-pointers by the end of the quarter to get his team leading 31-18.

The HCI boys threw all they had at their opponents in the last quarter, but it proved to be too little, too late. They had a sniff at an impending comeback with 6:11 to go when Gao Shan (HCI #8) stole possession and went for the lay-up on a fast break to bring the scores to 33-26, galvanising the HCI crowd.

But Ray (NJC #8) again eased some of that pressure by sinking two successive free throws and another two points to make it 37-26.

“In this match, honestly, we did fight hard, but there were a few mishaps here and there — mis-shots, turnovers — but it’s okay, we did hustle a lot also, so I’m extremely proud of my teammates,” said Gao Shan (HCI #8) in assessment of his team’s performance.

Paying tribute to his team’s efforts again, NJC captain Ray (#8) said: “It’s a great feeling, all our hard work has paid off. I’m very happy for my team… it was really a team effort, and I can’t thank them enough.”