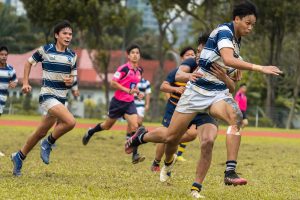 The Barker boys edged Saints 7-5 and 17-14 in the pair of back-to-back 7-a-side matches, involving different groups of players from each school. This is a change from the usual 15-a-side format in the first National School Games rugby competition after a two-year hiatus, due to the ongoing Covid-19 situation.

“I have been here for seven years and we haven’t gotten to the finals yet and today it’s the first one… it’s historic,” said Rex Wang, the head coach for ACS (Barker Road). “I think it’s a good opportunity for the boys especially for the Secondary 4 graduating batch that have not played since Secondary 1, so it’s a three-year gap. I think it’s good and exciting for them to come back.”

ACS (Barker Road) will play brother school, ACS (Independent) in the final scheduled for April 21. The defending champions defeated Raffles Institution 38-0 and 33-0 in the first semi-final that started on Monday but only finished on Wednesday due to inclement weather.

On Monday, the first match between ACS(I) was leading 26-0 in their first match with RI, until it was suspended following a lightning alert with four minutes left on the clock.

ACS(I) drew first blood in that match. Off a quick tap penalty taken by Javier Ling (#14), the ball was passed quickly to Ryan Ong (#10), and then on to Shane O’Hehir (#15). O’Hehir broke through the Raffles defence to make an almost half-field run from the ACS(I)’s own half to the opposing try line, confidently grounding the ball between the posts. O’Hehir successfully converted, putting 7-0 on the board for ACS(I). O’Hehir extended that lead with another successful try and conversion from a ball that popped out of a post-lineup ruck.

In the second half, ACS(I) put another 12 points on the scoreboard with line breaks by Isaac Chow (#13) and Damian Loh (#28) that led to a pair of tries. Only one out of two tries were successfully converted by O’Hehir before play was stopped at 26-0.

ACS(I) and RI were only able to resume their semi-final on Wednesday — after no play was possible on Tuesday due to lightning — with O’Hehir and Chow adding a try each to wrap up Match 1. Another successful conversion by O’Hehir saw the fulltime whistle blow with a score of 38-0 for Match 1.

Match 2 was equally fruitful for ACS(I), with five tries and an 80 percent conversion rate to win with a convincing 33-0.

In light of the current national Covid-19 guidelines on team sports, there is a cap of a maximum 30 fully-vaccinated persons allowed on the playing field, including referees and linesmen. This is the impetus for the return this year of NSG Rugby in the 7s format.

“[The team has been] really looking forward to it since last year, in preparing for the Games. We are really happy that games are back,” said Lim Kit Siang, the RI rugby teacher-in-charge.