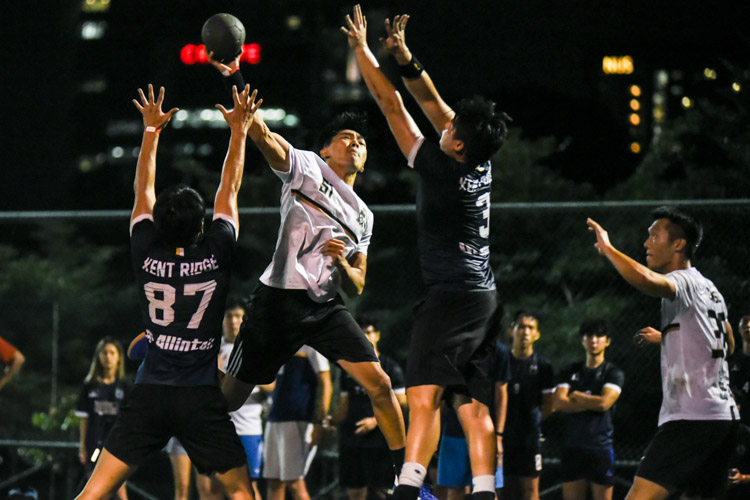 Temasek Hall’s Tomoyuki Ban (#51) scores to make it 30-31 against Kent Ridge Hall with only a few minutes left in the NUS IHG men’s handball final. He scored again moments later to equalise the game, which TH eventually won with a 32-31 scoreline. (Photo 1 © Iman Hashim/Red Sports)

NUS Sports Recreation Centre, Friday, February 7, 2020 — With only a few minutes left on the clock, the scoreline read 31-29 in Kent Ridge (KR) Hall’s favour in the National University of Singapore (NUS) Inter-Hall Games (IHG) men’s handball final. After leading for practically the entire game, the boys in blue were set to dethrone defending champions Temasek Hall (TH) and clinch their first handball title in at least six years.

But Temasek’s Tomoyuki Ban (TH #51) had other ideas.

“I knew there wasn’t much time left, but I did not know exactly how much. As such, I was entirely focused on making every single play count,” he said after the match.

And make them count he did, as the fourth-year undergraduate sank two successive shots into goal to equalise the game at the death, before the referees called for a stoppage to discuss a foul committed on court.

“It just so happened that I was in the best position to take the shots to equalise,” said Tomoyuki (TH #51). “I trusted in all my teammates and if they had the better opportunity I was sure to have had it passed on to them instead.

As the game dragged past midnight, the Temasekians eventually sealed victory via Teo Kee Chong (TH #7) in the final 40 seconds, with subsequent good defensive work by Soo Peng Ru (TH #38) keeping the scores at 32-31 in the last play of the match.

The final whistle cued raptures from the boys in white and a handful of defiant Temasek supporters who had watched the game from a considerable distance, despite a directive barring supporters from the Games following the raising of the DORSCON level to Orange the same evening.

It brought an end to a breathtaking encounter which saw both teams perpetually exchanging shots at goal. At half-time, the two teams were still almost inseparable with KR leading 15-14.

As the second half got underway, KR raised their momentum with goalie Leon Quek (KR #34) making a decisive save followed by a 3-0 run via Tan Siew Wei (KR #24, two) and Immanuel Tan (KR #70), extending their lead to four at 18-14. The TH boys, though, were relentless and reduced the deficit back to one at 18-17.

From this point onwards, the score margin never exceeded two goals as both teams continually took turns to convert their shots, until Ngoh Xian Jun (KR #74) managed to restore a healthy three-goal cushion again at 26-23 in the last 10 minutes of regulation time. TH then called for a time-out.

“To give them full credit, they performed way beyond our expectations,” said Tomoyuki (TH #51) regarding opponents KR. “They managed to shut out our offense quite effectively at the start, and our defense wasn’t working at all. So we had to change things up a little if we wanted to stay in the game.”

After the time-out, mayhem ensued as the pendulum kept swinging both sides. With KR leading 28-26, a Temasek player got sin-binned but Tan Siew Wei (KR #24) failed to convert the resultant penalty throw. Tomoyuki (TH #51) cut the deficit to one again, but Siew Wei (KR #24) redeemed himself instantly to make it 29-27.

Temasek captain Low Ji Xian (TH #18) converted a penalty throw shortly after to half the deficit once again, but Yong Ying Hao (KR #23) regained the two-goal margin at 30-28. Whenever TH scored, KR responded. The Kent Ridgeans could seemingly already taste victory when Siew Wei (KR #24) sank in another shot to make it 31-29.

But Tomoyuki (TH #51) knew he could not disappoint his hallmates who expected nothing less from the defending champions. He said: “We knew that our friends and entire hall believed in us, and we did not want to let them down. Pressure is good though, it helps us grow as players and athletes.”

The rest was history: after cutting his team’s deficit to 30-31, Tomoyuki (TH #51) found space on a fast break to equalise before teammate Kee Chong (TH #7) won it in the dying seconds. Moments before the winner, Temasek goalie Jordan Seow (TH #13) had also made a crucial stop from Yong Ying Hao (KR #23).

For KR, the heartbreaking loss must have felt like déjà vu for some players after they had also led in the final two years ago against Sheares Hall (SH) but lost in overtime. But for TH, the win sealed yet another double gold for the second straight year after their female counterparts had won their final a day earlier against SH.

The Temasek girls had a comparatively easier time during their final, racing to a 10-4 lead within the first 20 minutes against the girls in orange, who were making their first ever final appearance. TH eventually won with a 17-11 scoreline.