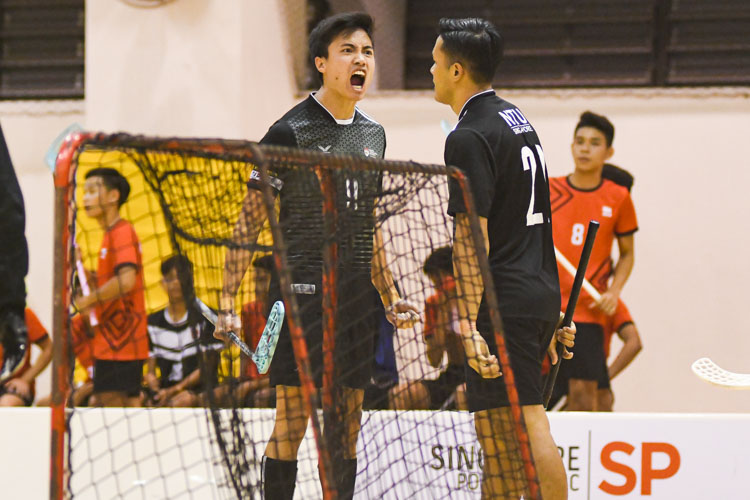 Amshar bin Amin (NTU #9) celebrating his first goal with his teammate Muhammad Jazli bin Yuslane (NTU #21). NTU put on an offensive exhibition as they demolished Team ITE, who were POL-ITE champions, with a 6-0 victory to clinch the IVP title. (Photo 1 © Stefanus Ian)

Singapore Polytechnic Sports Arena, January 20, 2020 — Nanyang Technological University (NTU) floorball captain Amshar Amin (#9) concluded his four-year run for the school in style as he finished the final with a thundering hat-trick under his belt and a gold medal to match.

The boys went against Institute of Technical Education (ITE) to demolish them in a 6-0 victory during the Institute-Varsity-Polytechnic (IVP) floorball final. The boys displayed fierce domination in the floorball scene by securing both titles as champions of IVP and the Singapore University Games (SUniG).

The NTU captain remarked that while the win was “four years too late”, he was immensely proud of the boys and what they have finally achieved together.

“As captain, I feel greatly responsible to lead this team,” said Amshar (NTU #9). “They have given me their all, so I want to give them my best as well, and to inspire them to do their best for every game and every training.”

NTU snatched an early point against ITE through the combined efforts of Muhammad Jazli (NTU #21) and Amshar (NTU #9). Jazli (NTU #21) sped down the left board and crossed to the latter, who was open. The captain took a first-time shot into the net and yelled in jubilation after scoring the opener.

Filled with confidence, it was no wonder that they doubled their lead within the next few minutes.

In a flurry of passes and dribbles, Jarryl Chan (NTU #25) scored a far shot from the right board, smiling in disbelief when the whistle was blown. Although the ITE defenders were diligent in their defense, staying low to block any grounders, the ball blazed past them.

Lim Jian Hong (NTU #70) attempted to outplay the keeper but was unable to send the ball into the post. His efforts did not go to waste however, as R Sathish (NTU #31) found a rebound and finished off his efforts. Unfortunately, due to a foul committed by a player standing within the keeper’s box area, the goal was disallowed.

The patient Foo Jun Wei (NTU #17) sprayed the ball to his teammates from the back, slowly searching for the golden opportunity to widen the score margin. The ball reached Sean Toh (NTU #8) who found the opening and took a one time shot at goal, resulting in 3-0.

ITE were physically unable to capitalise on their possession as NTU refused to let them pass comfortably, always certain to give pressure where it is due.

“I would say that the boys under-performed. They did not play up to the expectation,” commented ITE’s coach, Tan Lee Leng. “But, it is a foreign ground, in the sense that the atmosphere could be a factor that is stopping them to perform ideally.”

NTU’s offensive edge laid in their aggression and power in their attacks, both of which seemed to overthrow the ITE team. While the latter was undoubtedly skilled individually, NTU scattered and disrupted their play with fast tempo and rough play.

Lee Leng continued, “Despite the score, I didn’t want the boys to focus on the outcome. Our game plan is never to focus on that but rather the process of the game; how they defended, attacked and frequency of shots. I just reminded them that we had to play to our pace, not the opponents.”

Before the second period came to a close, a power play was awarded to ITE due to foul play. Taking heed of their coach’s advice, the boys took this moment to collect their composure. With a disadvantage given to NTU, ITE managed to find passes to play them around.

Wang Zhi Xian (ITE #9) found an opportunity to shoot but it was saved by the keeper.

Due to foul play, a penalty shot was given to NTU. Looking to capitalise, Foo Jun Wei (NTU #17) stepped up to see the fourth goal go in. With poise, he slowly inched towards ITE keeper Muhammad Na’im (NTU #1). His eyes landed on a gap at the top of the post and with a swing, saw the ball land at the back of the net.

The third period saw a shift in momentum, as ITE started to play at their tempo instead of trying to keep up with NTU. As such, they saw greater control of the game. Unfortunately for them, their little mistakes were lapped up by NTU. A split second decision by Amshar (NTU #9) saw the fifth goal in through a rewarding drag shot.

Amshar (NTU #9) delivered once again to finish the final off with the sixth goal through a rebound after a goalmouth scramble.

“From the first to last whistle, the boys followed the coach’s plan. They trusted themselves to carry out whatever that had to be done,” concluded the NTU captain. “We protected the keeper at all costs and hence did not concede any goals.”

While ITE never lost their intensity throughout the entire match, they simply got outplayed by NTU.

To conclude the season, ITE coach Lee Leng said: “With all their faults being said, I am actually really proud of the boys.

“We only had four trainings since season started and still managed to make it to the final. It is really a bonus to come this far. While I am not very satisfied with their performance, I am satisfied with how far they have come.

“I know they are capable of doing better. For sure.”