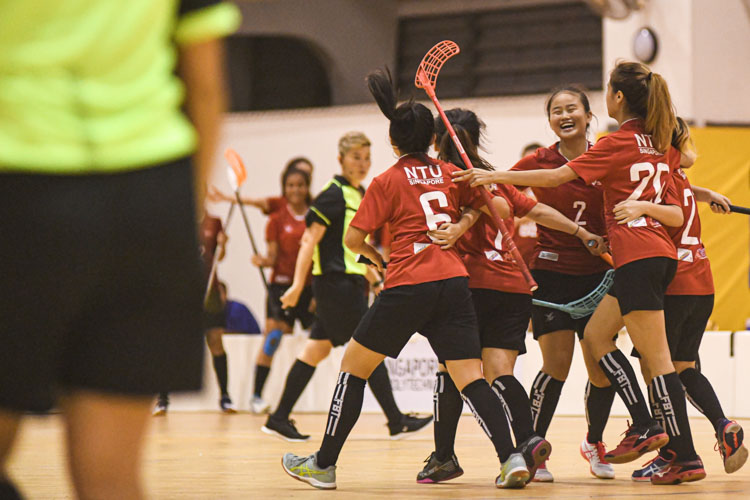 NTU players celebrating their opening goal against RP. Nanyang Technological University completed their Institute-Varsity-Polytechnic (IVP) floorball season in a close-to-perfect run against Republic Polytechnic. The girls in red dominated the match with a 2-0 win as they were crowned 2019/20 IVP champions. (Photo 1 © Stefanus Ian/Red Sports)

Singapore Polytechnic Sports Arena, January 20, 2020 — Nanyang Technological University (NTU) completed their undefeated Institute-Varsity-Polytechnic (IVP) floorball season with a victory over Republic Polytechnic (RP). The girls dominated the match with a 2-0 win and only had smiles at the end of the match as they were crowned 2019/20 IVP champions.

Despite their flawless record, the girls had a rocky start, but the hope of grabbing the gold medal spurred them on throughout the season.

“Our first two games were not very good. It was not what we expected, nor what we can do,” said goalie Shermaine Goh (NTU #52).

NTU kicked off their IVP shakily, nearly losing to Singapore Institute of Management (SIM) with a score of 2-1.

Also, they almost gave away their game with the Institute of Technological Education (ITE), where the victory goal was only scored in the last 20 seconds, resulting in a clutch score of 2-1.

“But from the third and fourth game onward, we picked ourselves up. We rode on that momentum all the until finals,” Shermaine (NTU #52) continued.

The game began with NTU, who did not even make the semis last year, looking to gain an early lead through Emily Ong (NTU #88) and Cheryl Seet (#27), who took shots consecutive of each other.

Unfortunately for them, no net was found due to RP’s tight defence and composure under pressure. Their communication with each other made them a tough nut to crack despite continuous shots being taken against them. Credit is given to the keeper Jessica Chua (RP #25), who instructed the defenders to carry out play-ups and even saved fast shots with her dives.

The play was then disrupted during NTU’s four-man disadvantage due to the wet floor at board side. The time-out spanned to an estimated ten minutes, possibly breaking the intensity that was building up on the court.

When the game commenced once again, Nurul Shahidah (RP #24) had a try at sending a drag shot from half-court but missed her glorious chance at an opener due to NTU’s efficient box play.

The second period began with a more evenly-matched competition. Before, it was clear that NTU had more chances to shoot, but now both teams seemed to have an equal number of breakaways.

RP found their groove and held possession well, making use of all players on court through accurate passes. On the other hand, NTU started to clash with each other near the offensive side, preventing decisive finishes.

Just when the upper hand was given to RP, NTU did not let their efforts go to waste. A pass from Yeo Xuan (NTU #30) was received by Cheryl (NTU #27), who fired a direct shot at the keeper’s blindside, that saw the end of the goal-drought.

Each shot at goal drew a big reaction from the spectators. This created an atmosphere of excitement and at this point, it still appeared that a goal can be scored at any moment by both teams.

“We were aiming for gold from the start, and with new additions to the team, we became stronger,” commented Shermaine (NTU #25). Since the Singapore University Games (SUNIG), Division 1 players such as Cheryl (NTU #27), Yeo Xuan (#30), Yee Yun Shawn (NTU #14) and Shannon Yeo (#36) had joined the squad.

The team managed to squeeze the energy out of their opponent, but Jessica (RP #25) was diligent in giving maximum effort to deflect every ball. With every shot taken, NTU stood more firm in dominating the match and grew hungrier to finish the game off with a sure win.

And so they did.

NTU doubled their lead through Nur Sabrina (NTU #20) and Heather Ng (NTU #21) in a goalmouth scramble. Their quick passes to each other behind goalpost and near slot area eventually resulted in the ball rolling into the net.

“The game was pretty intense, and I’m really proud of the team because they really played their hearts out,” said captain Shahidah (RP #24). “The girls gave their all and tried to get it back. But luck wasn’t on our side.”

“Also, our coach kept telling us, “We are almost there, try not to give up.”

Nearing the last few minutes, RP still put up an unrelenting fight against the winning team and increased the frequency of their attacks. While they failed to see a breakthrough, it was a good effort and the game ended with a score of 2-0 to NTU, now the champions of IVP 2019/20.