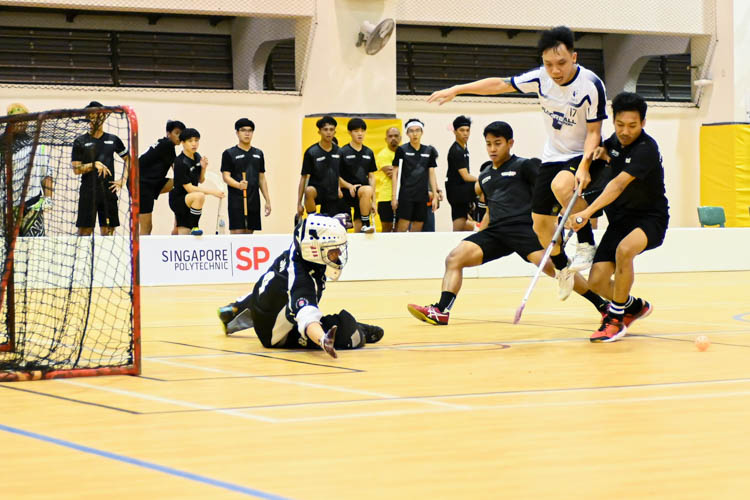 Sng Jian Da (SMU #17) fighting for the ball during the match. Singapore Management University knocked Singapore Polytechnic out of the IVP with a score of 6-2 in their final group match. (Photo 1 © Stefanus Ian/Red Sports)

“On our side, we knew we needed a win and needed to score a few goals to be the top in their table. And so we went in and actually started off really well,” explained captain Kumaresa Pasupathy (SMU #34).

Within a minute into the game, SMU drew first blood through Sng Jian Da (#17) with a explosive shot from right flank. The next face-off then saw SP regaining their composure after conceding, only to lose it again due to defensive errors. The alert Lai Wei Jian (SMU #19) caught a mistake at the back and capitalised on it for a go-ahead double of their lead.

Nevertheless, both teams still seemed equally matched. It was the lapses in concentration by SP that gave their opponent a wider advantage.

Jian Da (SMU #17) made another decisive appearance during SMU’s 4-man hustle when they were confined into box play after committing a foul. The speedy forward had adequate game sense to press the SP defenders till they were strained to the back. Eventually, he forced the defender to fumble and got another break with a loose ball. Without wasting a second, he individually brought the ball to the back of the net to score the third goal of the game, furthermore during a disadvantage.

While having individual skills, the SP boys seemed to be unable to find each other on court, resulting in very scattered play. Muhammad Aliff (SP #21) was, however, composed and alert to find open players to provide the link-up to attack.

Lee Chee Yong (SMU #13) was a critical player for the whites as he was able to form plays down each of the board side, but failure to find a finishing shot stagnated the score line.

Before the second period came to an end, an advantageous penalty was given to SMU. Kumar (#34) stepped up to take the one and only penalty of the game. He inched closer to keeper Vernon Tong (SP #25) with short left-right dribbles, awaiting the golden opportunity for a gap to appear. With a split-second flick, he diligently sent the ball from the ground to the top left of the net, ending the second period.

Yet with every goal they concede, SP seemed to fight harder, as if having nothing to lose. In the words of their coach Shahril Ismail, they decidedly begin to fight for their ‘home ground’.

“Everyone is supporting and watching, so let’s try something new. Let’s play better than whoever our opponent is,” he told the boys, spurring them on.

With the start of the third period, SP began to change their strategy. During their possession, the goalie would be subbed out and replaced by a sixth man. This was an effort to create more goal-scoring opportunities and possibly minimize the goal difference.

Their tireless runs in and out of court did not go to waste as the more shots were served toward SMU’s post, though saved by keeper Joshua Loh (SMU #1).

Nevertheless, the boys in black continued to give their supporters a show to watch. In a chaotic tussle near SMU’s goalpost, Gabriel Cheong (SP #70) got hold of the ball and a flick to Huang Jia Cheng (SP #77) saw their first goal at home ground. Joshua (SMU #1) was unable to keep his side a clean sheet, as the ball went over him to land accurately into the net.

The sixth-man strategy paid off greatly, as they saw their second goal a few moments later. Jover Wee (SP #39) got a breakaway and in a swift drag shot, sent the ball flying past SMU’s defenders and right into the goalpost.

In Kumar’s (SMU#34) words, SP showed how passionate they were in the last period. They wanted a comeback and fought hard to minimize the point gap.

With a win in their bag, SMU went ahead to play against Nanyang Technological University for a spot in the final. However, they were unable to keep up and lost 3-2, meaning that the boys will be playing against Temasek Polytechnic for third place on January 20 at SP.