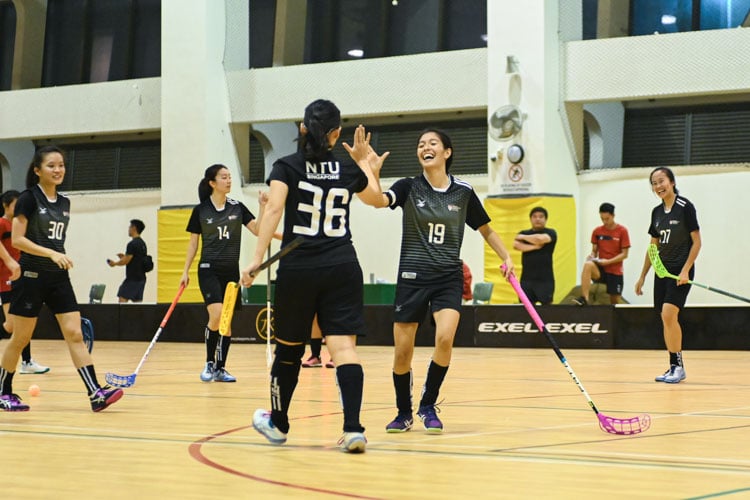 In a top-of-the-table clash, NTU cruised to a 5-0 victory over TP to book their place in the semi-final. (Photo 1 © Stefanus Ian/Red Sports)

Singapore Polytechnic Sports Arena, January 16, 2020 — In a top-of-the-table clash, National Technological University (NTU) toppled POL-ITE champions Temasek Polytechnic (TP) but was made to work hard for their 5-0 victory. Both teams fought hard as the results would determine their opponent in the semi-final of the Institute-Varsity-Polytechnic (IVP) floorball championship.

Despite the scoreline, it was no easy win for NTU. Countless shots at goal were taken by Low Jing Hui (TP #48) and Vanessa Poch (TP #36), of which were all accurately saved by NTU’s keeper Shermaine Goh (NTU #52). This resulted in the clean sheet that would then provide the base for their domination.

“The team actually came into the game quite unprepared as everyone felt very nervous. However, it turned out better than expected,” said captain Sim Wen Lin (NTU #19).

Being undefeated the entire IVP and POL-ITE season, the TP girls came into court with strong confidence and managed to dominate in possession for the first few minutes of play. As time went by, NTU slowly began to press higher to upset TP’s play.

Their efforts did not go to waste as pressure from Emily Ong (NTU #88) finally melted their composure and caused the defender to lose the ball at half court. The loose ball was swallowed up by an unmarked Christy Tay (NTU #99), who opened the scoring with an electrifying goal.

With the momentum built, it was not long before the second goal was scored. Yeo Xuan (NTU #30) and Sim Wen Lin (NTU #19) participated in a dual effort that led to the ball being tapped accurately to the back of the net in close range to the keeper.

In an effort to end the goal-drought, Hrithie Menon (TP #7) successfully dribbled past three players, forcing NTU to lose their shape. She was, however, unable to get the ball past her alert opponents who stepped up to deny her.

NTU continued on with unhurried play-ups that provided opportunities for open players to take a direct shot at goal. The link-up was provided by Yee Yun Shawn (NTU #14) who sprayed the ball around from the back, dictating tempo as she passed the ball around.

As the clock wound down minutes to zero, TP was forced into a box play due to a foul, with Vanessa (TP #36) having to sit out. As she went back into court, the forward came centimeters close to scoring. The opportunity was initiated when she received a ball right in front of the post but a failure to scoop the ball in resulted in a continuation of TP’s muted affair.

It was during the last period where TP began to come up higher to attack. This move greatly neglected their defence and consequently caused them to concede yet another goal. A glance at an open Shannon Yeo (NTU #36) sent the ball going her way down the boards by her defender. In a split of a second, she wrong-footed the keeper and finished with the third goal of the match.

This was their best game so far, said Wen Lin (NTU #19). And it did not seem like their streak was going to end there and then.

Within the remaining time, NTU managed to break past the porous defence and score two more goals.

Shannon (NTU #36) repeated her affair with the help of her captain to score the last goal through the keeper’s blindside. She lapped up the loose ball to find herself once again unmarked and a clear target at goal.

“For TP, we have been winning all our games since POL-ITE. And today, I think our loss woke the girls up. I think it made them realise that we are not as good as we thought we were and how we are not always the winning team,” explained captain Valerie Ong (TP #9).

“We actually needed this loss to make ourselves realise that we make mistakes as well.”

With the concession of five goals and none for themselves, the morale in TP at first seemed visibly low. Yet with odds stacked heavily against them, the girls refused to go down without a fight.

With a spur of aggression, they fought hard to defend their post and continued to take chances at goal.

Despite the defeat, Valerie (TP #9) was proud to see the girls give their best and not give up till the buzzer went off.

“Even though we have been winning the past few games, the team still felt like they did not play to their best abilities,” she added.

“But (with regards to) today’s game, I feel like they hustled and honestly played very well. So even though we lost the game, it did feel like a win.”

On Saturday, NTU proceeded to beat National University of Singapore (NUS) with a score of 2-1, securing their spot in final. On the other hand, Republic Polytechnic (RP) overcame TP in a 2-1 fight and will be going against NTU for gold on January 20.