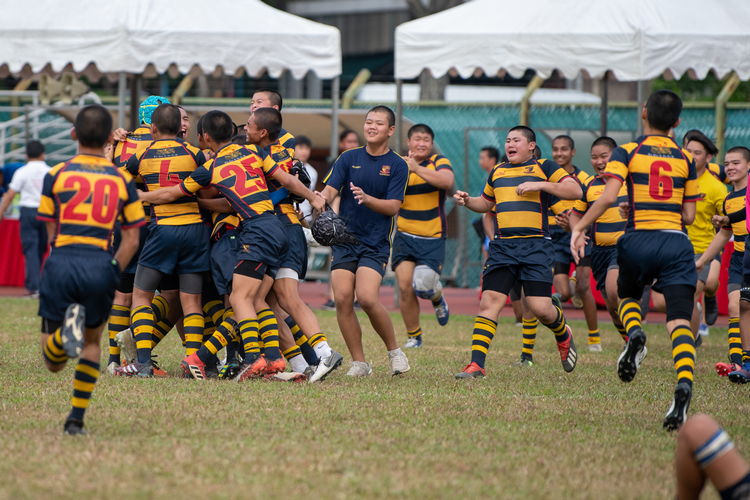 Queenstown Stadium, Thursday, August 29, 2019 — Most teams would have been encouraged with a 13-0 half time lead over one’s perennial rivals, but that was scant comfort for captain Tycen Yeoh and his Anglo-Chinese School (Independent) teammates in the National Schools Rugby Championships C Division Cup final.

Fresh on their minds: the memory of surrendering a 10-0 half time lead to lose 10-12 to the same St Andrew’s Secondary School team in a preliminary round-robin match just over a month ago. In fact, most of the preparation for this final for the ACS(I) boys revolved around preventing a repeat. Their shaven pates perhaps another testament of their collective determination.

Against the odds that even their coaches couldn’t have anticipated, the ACS(I) boys prevailed. Despite having two boys sent off in the second half, ACS(I) held on to beat the Saints 19-7 for their fourth-straight C Division rugby Cup win and the school’s second “Grand Slam” — winning the A, B and C Division titles in the same year — in three years. This year’s C Division win also meant the ACS family of schools have swept all five national schools rugby titles this year for only the second time in the last decade.

“Our defence really won it for us today,” said ACS(I) head coach Adrian Chong. “It was great team work today, everybody covered for each other, and our hard work paid off.”

Those hours of toil, sweat and tears were immediately tested when the Saints came out charging for the second half. They scored a converted try through Ranen Seow (#30) and Ian Lee (#6) within the first 10 minutes of the second period to more than half the deficit — undoubtedly leveraging their temporary one-man advantage after ACS(I)’s Jacob Tan (#8) was yellow-carded for a high tackle and sent to the sin bin.

Jacob was flashed a second yellow card for a tip tackle shortly after he came back onto the field, which meant an automatic red card and a permanent ejection from the match. Barely three minutes later, fullback Muhammad Irfan Siregar (ACS(I) #15) followed his team mate to the bleaches after being shown a straight red for elbowing Saints’ Jireh Tham (#24) in the face as ACS(I) was launching a counter attack.

After those two dismissals, the ACSians began to play a narrower game, while profiting from their opponents’ handling errors deep in their 22.

“We lost to a better team,” said St Andrew’s veteran head coach Alan Wee. “We paid the price for giving away the ball too easily. We started off badly and didn’t find our momentum until the second half.”

In total, ACS(I) captain Tycen scored 14 points from four penalties and a conversion after a try scored by in-centre Jeffrey Lee (#12) in the first half — which also happened to be Jeff’s first try in this competition this season.

“We didn’t play our best in the group stages,” said Tycen, who clearly benefitted from the extra 30-minute kicking practice after every training session in the run up to the final. “We didn’t want a repeat of what happened then, we were mentally prepared to keep calm and stick to what we have to do.”

This year’s victory meant that ACS(I) have won the C Division rugby title six times since the turn of the decade, with the Saints twice victorious.

Scoring by half
Anglo-Chinese School (Independent) vs St Andrew’s Secondary School
First half: 13-0
Second half: 6-7