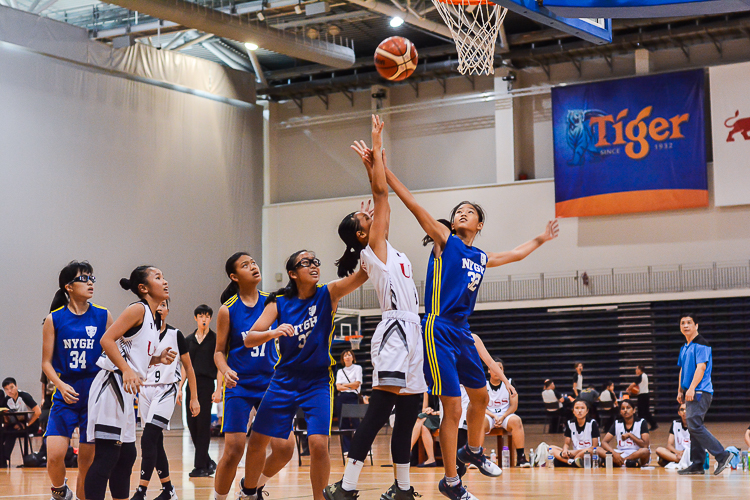 OCBC Arena, Wednesday, August 21, 2019 — Nanyang Girls’ High School (NYGH) displayed a dominating performance during the quarter-final of the National C Division Basketball Championship with Unity Secondary School (US). With a 45-5 win in their bag, NYGH comfortably qualified for the semi-finals.

As soon as the ball was tipped, it was evident that NYGH adopted a full court press in a bid to dominate the game. And so they did.

Each point in the first quarter was scored through simple 1-2 layups, made possible by patient but efficient passing on the outside. Kaining (NYGH #28) played a crucial role in making steals and often aided the team by bringing the ball to the baseline. In addition, she also had a good eye for the creation of plays and was able to make assists that converted into points.

The first two periods were a muted affair for US, with the exception of USS #9 who broke the silence in the second period with a basket.

The second quarter was a struggle for both teams. NYGH had many open opportunities but could not seem to establish points.

However, after half-time, NYGH came into court with greater intensity and tempo than before. They were determined to take the game home.

Points began to be scored at a faster pace for NYGH. Their concentration on offence paid off, as they doubled the score on the scoreboard in just one period.

US had more opportunities to counterattack as well, but the opponent’s disciplined defence and fast reactions denied any of their attempts to score. NYGH sealed off the game with good defence and refused to let any easy baskets.

USS Roster
We were unable to obtain the roster for Unity Secondary. If you know any of the players, kindly post them in the comments below and we’ll update the post. Thanks.