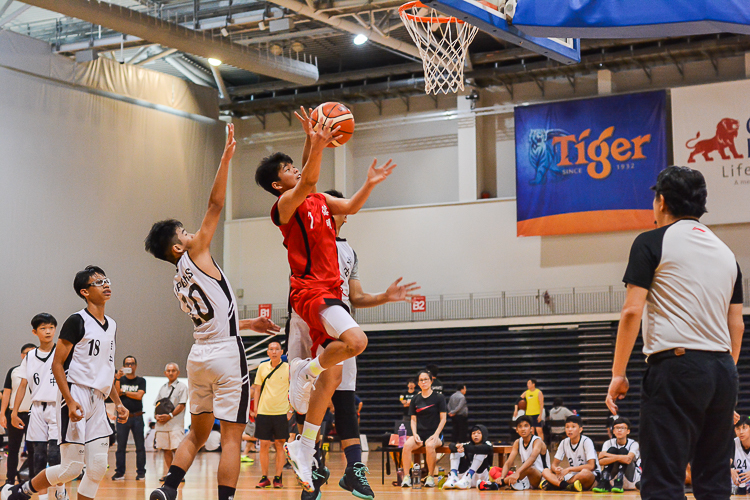 OCBC Arena, Wednesday, August 14, 2019 — Dunman Secondary School (DSS) put on a strong performance in the second game of the group by taking out Bukit Panjang Government High (BPGHS) 59–30 in the first round of the National C Division Boys Basketball Championship.

Jayson Tan (DSS #7) led all scorers with 22 points, while Elvin (BPGHS #6) followed closely with 12 points of his own.

DSS started the first quarter on a fast pace, looking to set the tone for the rest of the game. BPGHS were not drawn into it and played at their own pace, making baskets and keeping pace with DSS. BPGHS sought to work the inside-outside game, putting the ball into the post first to drawn the BPGHS in, before passing the ball out to open shooters. This worked as any DSS misses were corralled by DSS players in the post, who did well to gain position. On the other end, BPGHS did not have as many opportunities, but did well to knock down their jump shots to keep pace with Dunman.

DSS started to pull away in the second quarter, making use of their pick and roll game to generate points. Jayson Tan (DSS #7) came off the bench to start the second quarter and made an immediate impact on the boards. BPGHS had trouble finding the net in the quarter, as they made a lot of turnovers and were unable to make shots when they had opportunities. Furthermore, their woes were compounded on the boards, as they were continually boxed out of good positions by DSS.

The start of the third quarter saw DSS slip into a little bit of complacency, as their defence occasionally dropped rotations that led to open looks. BPGHS hit them on the fast break and scored a couple of baskets in that manner. However, DSS’s coach made a few key substitutions to the team in the middle of the quarter, which saw DSS steady the ship and maintain the double-digit lead going into the fourth quarter.

BPGHS showed a sense of urgency in their play in the final quarter, in a bid to claw their way back into the game. However, DSS showed their mental resilience and played hard even though the game was within reach. This allowed them to seal the game off decisively and notch up another win in their group.

DSS are now top of Group D with a 2–0 record, while BPGHS fall to second place with a 1–1 record. DSS will next play Yishun Town Secondary in their final game, while BPGHS will face Anglo–Chinese School (Independent) next.

DSS captain, Jayson Tan (DSS #7), had this to say about the win:”I think it was a good game, but we could have done better. The environment was different from what we played at in the East Zone, so it took a while to adjust. We hope to work towards winning a championship this season.”

DuSS vice-captain, Chee Kiat (DSS #8), added:”I think we slowed down a bit because everyone is unfamiliar with the location, but we will work to be better the next game.”