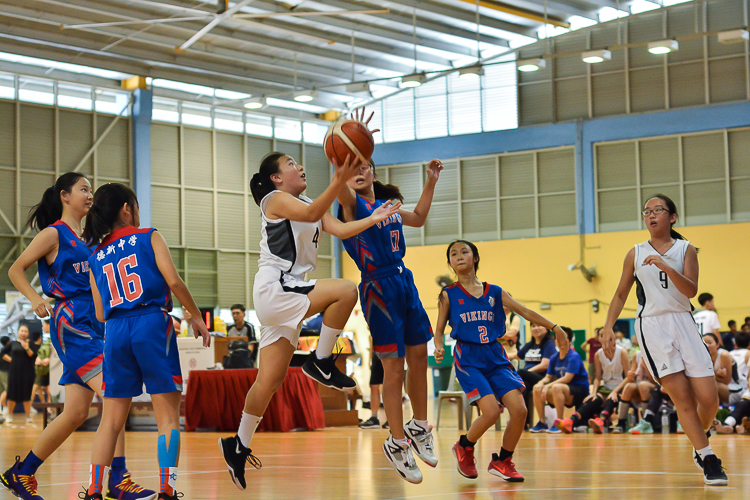 Au Zexuan (SCGS #10) and captain Chloe Laur (NVSS #27) were the top scorers of their team and poured in a total of 13 points each. Wang Jia Yue (SCGS #11) followed behind their lead with a grand total of 12 points while Shumin (NVSS #53) put in a formidable effort to achieve six points for her team.

The first quarter saw a good early start by both teams. Both teams traded baskets and matched each other point for point. While SCGS was able to get a slight lead, it was evident that the two teams were evenly matched.

SCGS came into the second quarter, ready to widen the point gap. They began to play the ball on the outside in order to secure open shots from the outside and successful drive-ins that ended with lay-ups. On the defensive end, SCGS initiated a relentless double-team on the opponent at half court. The game play gave them tremendous advantage as they held ball possession most of the time and managed to drive in to the rim with excellent finishes.

With every attack, SCGS often won out in aggression which left NVSS unsettled. In fact, their confidence and agility in counterattack awarded them with more chances to score.

Chloe (NVSS #27) was crucial in maintaining a momentum to score shots and minimise the point gap to the best of her ability. However, the third quarter witnessed a rather muted affair for NVSS as they only managed to put in 2 points.

SCGS maintained a competitive full court press and received majority of their rebounds. Their edge over NVSS was further increased as they refused to allow much shots to be taken off from their opponent’s end. There was little chance for NVSS to shoot, and by the time the teams entered into the last quarter, there was a 20 point difference between the teams.

Nevertheless, NVSS continued to give their all, commendably in both defense and offense. They managed to quieten down the attacks from SCGS and only allowed four points to be scored by SCGS in the last quarter.

With a secure lead and the game in their grasp, SCGS allowed the starters to rest while the rest of the bench were brought out. The final whistle was soon blown to secure SCGS’ victory.