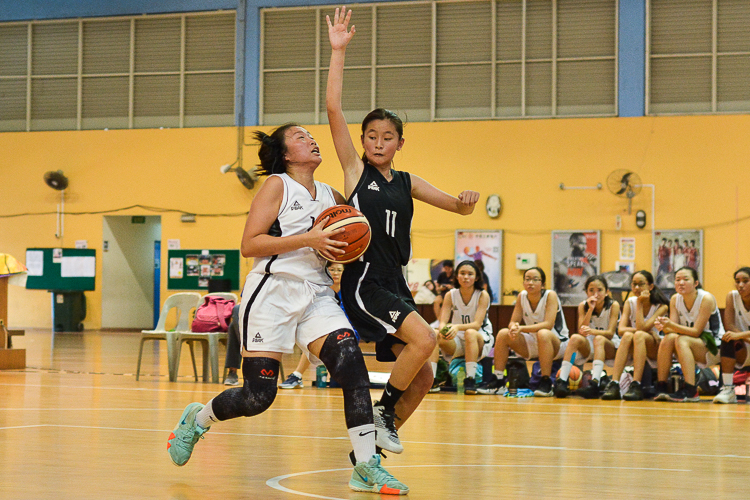 Singapore Basketball Centre, Tuesday, July 30, 2019 — Singapore Chinese Girls School (SCGS) secured a decisive 56-31 win over Edgefield Secondary School (ESS) in the semi-finals of the North Zone C Division Girls Basketball Championship. The win meant that SCGS will be moving on to the finals against North Vista Secondary School (NVSS), which will be the concluding match of the zonal championships.

“We did a lot better than our previous game with Yishun Town Secondary,” said Wang Jia Yue (SCGS #11) with a grin. “We managed to bounce back and get the opportunity to enter the finals.”

With majority of ball possession being held by the players of SCGS, it is without a doubt that the girls dominated the first quarter. This contributed to an impressive 7-0 run within the first few minutes.

While their confidence did intimidate the ESS defence, the scoring drought ended when SCGS made a mistake in attacking. ESS #8 seized the rare opportunity to dribble the ball in counter-attack to finish in a lay-up.

However, SCGS disallowed any other offensive moves by ESS and proceeded to keep up their tactical gameplay of simple but accurate passes to open players. In addition, SCGS executed tight man-marking against ESS players in defense and often converted such moves to swift counter-attacks.

Despite being down by nine points, ESS worked hard to put in the first basket of the second quarter. They even found more success in the second quarter in offensive, but often made mistakes that converted into goals for SCGS.

On the other hand, SCGS showed great resilience and stamina to put up a full court press. This made it hard for ESS to work the ball down in order to minimise the point gap.

While SCGS held majority of ball possession, their numerous attacks often saw the ball on the rim, but fell short of scoring the point. Nevertheless, the team adapted to this weakness and began to improvise.

This was when Au Zexuan (SCGS #10) played the crucial role in scoring points from the outside, especially when the center got crowded.

Halftime thus commenced with 23-12, where SCGS moved on with a comfortable lead in the game.

The third quarter was a closer match for both teams as possession kept changing between the teams. SCGS continued to shoot 3-pointers from the outside. As such, despite the higher intensity, SCGS managed to score 19 points in this quarter while they maintained an impenetrable defence.

ESS began to look shaken up by the change in pace, and could not get past the opponent’s defence to score much points.

The final quarter saw best performances from both teams. ESS managed to break past SCGS defence to claim a numerous baskets for themselves. Meanwhile, Celeste Niam (SCGS #4) was able to stack her team’s score by 20 points with good agility in counter-attack. While both teams scored 14 points each, the headstart SCGS got from the past quarters carried the to the finals.

Maeva Loo (SCGS #5), had this to say about going into finals: “While being really excited to go into the finals, we can’t be complacent and instead, do our very best.”

ESS Roster
We were unable to obtain the roster for Edgefield Secondary. If you know any of the players, kindly post them in the comments below and we’ll update the post. Thanks.