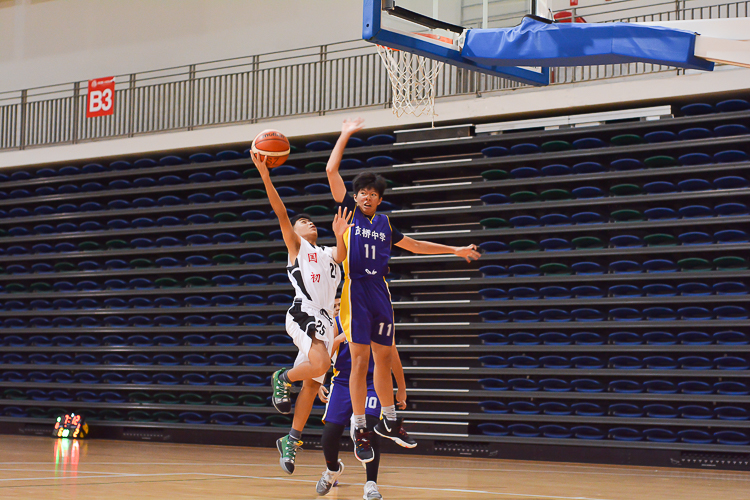 OCBC Arena, Thursday, July 11, 2019 — National Junior College (NJC) earned a crucial 61–15 win over Ang Mo Kio Secondary (AMKSS) in Group C of the South Zone C Division Boys Basketball Championship. The win puts NJC with a 2–1 record in the group and in the driving seat to qualify second out of the group with one more game to play.

NJC captain, Mohammed Shah Jehan (#23), had this to say about the win: “We lost the first game in the group, so we knew we had to bounce back hard in the remaining three games. We kept the mentality that we have to beat the remaining teams by large margins in order for us to progress from the group and this win puts us a step closer.”

NJC started off the game with really tight man marking in the first quarter, in a bid to put the clamps on the AMKSS defence. Mohammed Shah Jehan (NJC #23) did well to put points on the board for his team, scoring the first six points of the game to put his team in a comfortable position. AMKSS tried their best to score, but found difficulty with NJC players constantly disrupting the passing lanes. They eventually managed to get a basket on the board after a fast break which NJC failed to respond to.

The second quarter was a more open affair, as both teams constantly turned the ball over. AMKSS looked more settled down in the quarter as they finally started to see their shots fall. On the other hand, NJC continued their scoring momentum on their end, slowly building their double-digit lead as they headed into halftime.

NJC’s hunger to end off the game was evident coming out of the break, as their players were relentless on the boards and converting most of their second chance points. AMKSS tried to get into position after each missed NJC shot, but they were boxed out constantly by the NJC players, who were able to get easy rebounds. AMKSS also had no luck on the offensive end, as they found it difficult to pass out of the swarming NJC full court press. This again led to costly turnovers that NJC converted into easy points.

The final quarter saw the death knell for AMKSS’s chances of taking the game from NJC, as NJC sealed off the game with multiple fast break baskets that stretched the lead beyond the 30-point mark. Each AMKSS missed shot was corralled by an NJC player and would be moved down the court efficiently on the fast break for an easy basket. The gamed ended 61–15 with NJC taking their second win in Group C. They are now tied for second in the group with Gan Eng Seng, with both teams securing a 2–1 record. They will face each other in the pivotal final match of the group, with the winner qualifying for the second round.

NJC vice-captain, Samuel Aaron Samson (NJC #25), added:”All of our games now are quite nerve-wracking, but we do our best to motivate each other as a team to bring us through each game.”