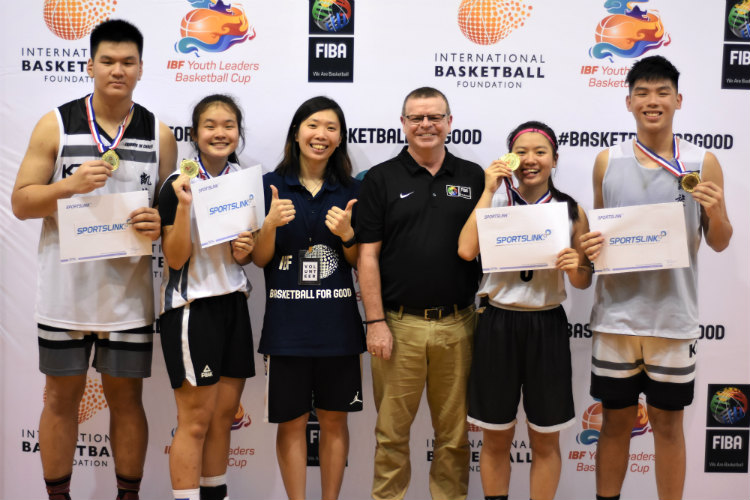 The team, Wannabe, which consisted of Amabelle Lim, Jeremy Teo and Glenn Tan who are from Nanyang Junior College and Valarie Lim who is from Millennia Institute, emerged as the ultimate champions and will be headed to Bali to represent Singapore in the Youth Leaders Basketball Cup.

Valarie Lim commented, “I feel good about our win today. There were a lot of strong teams out there today and we were able to exceed our expectations to emerge as champions.”

The IBF launched its first Youth Leaders Basketball Cup last year in Bali, Indonesia, where the winning teams of the qualifiers in various South East Asia and the Pacific region would represent their country to compete in an international mixed 3×3 tournament.

Amabelle Lim said, “I felt that it was a very good experience. Most of us know one another here as we have played against one another in the school competition or outside competition. However, this is the first time we are competing in such a format and it is really a great experience. It would be nice if there would be more teams competing in the future.”

The IBF was founded by the International Basketball Federation (FIBA) in 2008 to use basketball as a tool for positive social change. The IBF’s mission is to address the role of sports, in particular, basketball, in the fields of community building, education, women empowerment, health and well-being, and conflict resolution.

IBF first launched the IBF Youth Leaders Basketball in 2018, a new project in South East Asia and the Pacific Islands where a nominated youth leader representing the country would attend a seminar to learn about leadership skills, different Sustainable Development Goals (SDGs) and on how to organize a FIBA-sanctioned U18 Mixed 3×3 Qualifying tournament in their respective countries. They will be taught the importance of using Basketball For Good and how they can use their 3×3 event to tackle an issue that their community is facing.

This year, Amanda Lim Zhi Yan is the youth leader representative from Singapore. She commented, “The Youth Leader Basketball Program is such an eye-opening experience. It’s such an amazing opportunity to meet people from different countries. I not only got to learn about their culture but also got to know them personally. This seminar has not only equipped me with the skills to run a 3×3 event but also taught me how to become a better leader.”

Other than just featuring a mixed 3×3 tournament, the event hosted two shootout competition as well. The first one consisted of a team effort from the free-throw line which also included activities to teach about healthy and unhealthy foods. The other shootout looked at getting two representatives from each team to shoot from any spot on the floor. The winner for the first shootout was the team I Want Go Bali (IWGB) while the winners for the second shootout were Reuben David Faustino Amado and Marilyn Yap Shushan of team Blazers Black.

The highlight of the day came when the final two teams, IWGB and Wannabe, squared off in the final game of the day. Glenn (Wannabe) led the charge scoring on multiple occasions. While I Wanna Go Bali tried to counter, their shots failed to go through. In an attempt to stop the lead from getting larger, Justen Chiam (IWGB) substituted himself out of the game so as to force Glenn (Wannabe) out of the game.

However, as soon as that happened, Jeremy (Wannabe) went to work. He was beasting and feasting in the paint. Amabelle (Wannabe) and Valarie (Wannabe) also contributed with three-point shots and layups of their own. As the lead grew wider, Justen (IWGB) came back into the game and tried shooting the three more and creating plays for his teammates. He was able to cut the lead but Wannabe proved too strong as they answered back with calm and collected plays. Jeremy (Wannabe) continued his strong performance and Wannabe eventually defeated IWGB to emerge as champions.

Jeremy (Wannabe) said after the game, “I felt really good. I felt that my team really helped me a lot today. It was due to their efforts that I was able to do what I do today. I really thank my team for that and now I am just excited about what’s to come, to make new friends in Bali. Of course, we got to put in the work as well as the matchups will only get tougher. We have to work hard to be able to achieve overseas as well.”

Glenn (Wannabe) commented, “I think as a team, we are really interested in how the sport can bring about the positive change and also bring people together. Our goal in Bali is just to have fun and make friends with the players from the other countries as winning is not the most important thing.”

On the success of the event, Amanda Lim added, “I am very glad that the event turned out well! This competition is unique as each team needs to have 2 boys and 2 girls and it’s cool because it provides a great opportunity for players to play with the opposite gender because conventional 3×3 only involves 1 gender. And from the competition today, we can see how gender equality is revolving because girls can also be equally good as boys. I am also thankful that we were able to receive support from partnering sponsors such as Deloitte, Hoops Factory, Gardenia and Food Panda which made this event possible and successful! I would also like to thank my team (Paul Ng and Chin Wan Qing) for their guidance and the volunteers who helped out at the event. Even though this is only the second edition of the IBF Youth Leader program, I hope that more youths will be aware of it and use Basketball For Good to make positive changes in our community.”