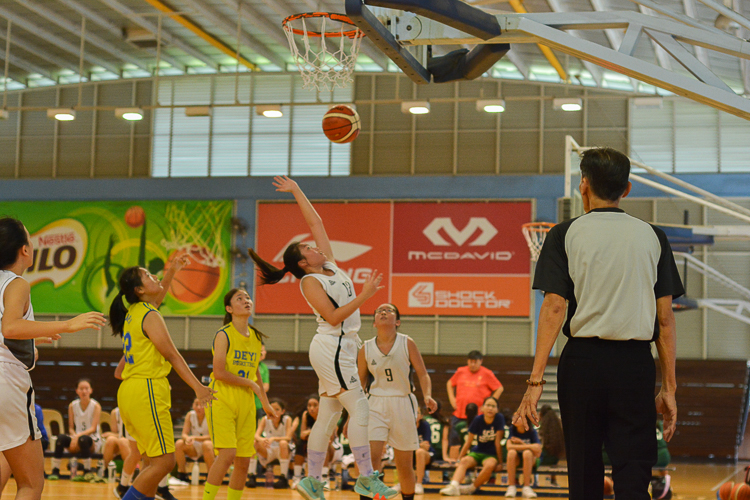 Wang Jia Yue (#11), SCGS captain, had this to say about the win: “We could have played better, even though this was our first match of the season. We will definitely try harder and fight harder for future matches.”

The first quarter was slow by all accounts, as both teams struggled to put points on the board. SCGS were very active on the boards, corralling multiple offensive rebounds. Unfortunately, they were unable to convert these opportunities. DYS on the other hand, tried to get close to the rim. However, they were unable to calibrate the power of their shots and they could not get their shots to fall. SCGS were able to score a couple of baskets on fast breaks and they provided the difference heading into the second quarter.

The pace of the game quickened in the second quarter, as both teams exhibited their desperation in finding a basket. They did not help themselves by missing many shots from right underneath the basket. Maeva Loo (SCGS #5) opened the scoring in the second half with a layup. DYS #23 responded in kind. DYS gave up a lot of rebounds in this quarter, but SCGS did not punish them at all for failing to keep their defensive rebounds. DYS however showed a bit more activity on defence, exhibiting some earnestness in stopping SCGS from getting to the rim.

The third quarter was a rebounding battle as both teams realised that was the crux to victory in this game. SCGS switched over to a full court press, which took away a lot of easy passes. This proved to be effective, as was evident when Celeste Niam (SCGS #4) pounced on an errant pass and took it the other way for an easy score.

The final quarter saw SCGS’s main source of offence come from fast breaks. Sarah Goh (SCGS #13) also good anticipation on defence to deflect an errant pass, allowing her to make an easy layup on the other end. SCGS rode their press and slowly built up a lead in the quarter, as DYS were unable to cope with the full court pressure. This allowed SCGS to seal the game comfortably, coming away 23–8 winners.

Jia Yue (#11) added: “I hope that the team will do well for the upcoming games and make our way into the National rounds.”