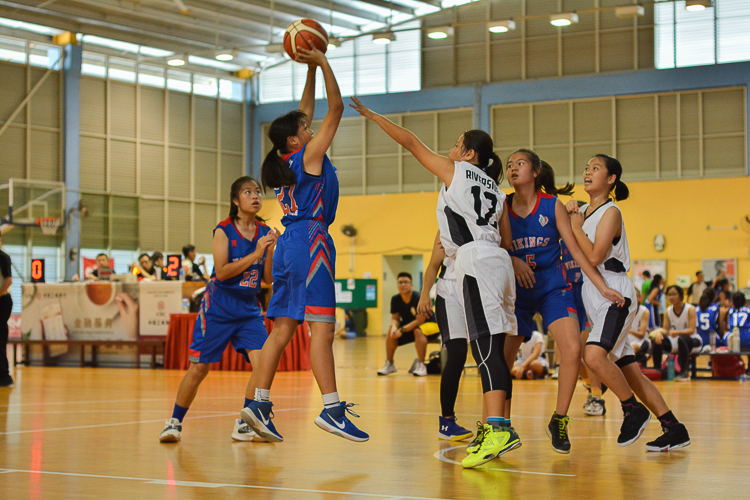 Chloe Luar (#27), NVS captain, had this to say about this win: “It was a fun win. Our goal throughout the game was to maintain our lead and not let our defence drop under any circumstance.”

NVS sure did live up to their captain’s words, as their defence kept RVS at bay for three quarters. RVS struggled to advance past the half-court, finally making the first basket only in the final quarter.

The first quarter saw both teams shaking off their early season rust, with missed baskets all over. NVS finally ended their drought with a lay up after two minutes. Offensively, they were able to grab many offensive rebounds, but were unable to hit the target. They managed to put up two consecutive six-point quarters. However, they could get away with that fact as they thoroughly suffocated RVS on the defensive end. The NVS players made use of their superior size to disrupt passing lanes and create fast breaks. NVS generated most of their 12 points in the first half via fast breaks.

The third quarter saw the game get away from Riverside, as NVS broke out their full court press. This made it even harder for RVS to advance the ball, as NVS players were aggressively jumping into passing lanes and taking the ball down the court for easy scores.

RVS slowly adapted to the press in the final quarter, as their players started to find the gaps in the NVS defence to break through. They finally capitalised on a golden opportunity when the NVS defence were caught sleeping on one play to score their first points on an easy underbasket. This was a rare loss of concentration for the NVS team, who were fully focused the rest of the game. This play galvanised the RVS players a little and they managed to follow that up a few more scores in the final quarter. However, it was too little, too late for RVS as NVS walked away 44–5 winners.

Chloe added:”My aim for this year is to win the championship with my team.”