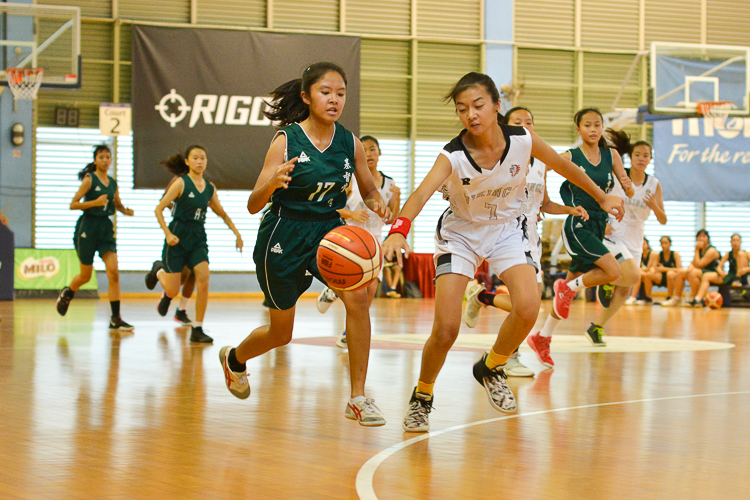 Singapore Basketball Centre, Thursday, July 4, 2019 — North Vista Secondary (NV) fought off a spirited Christ Church Secondary (CC) to win 35–19 in Group Y of the North Zone C Division Girls Basketball Championship. The win puts NV through to the second round of the competition.

Sammi Tan (NV #22) and CC #10 were joint top scorers with 8 points apiece. Shumin (NV #53 followed closely behind with 6 points, while CC #5 scored 5 points to contribute to her team’s cause.

NV captain, Chloe Luar (#27), had this to say about the win:”We are really excited to have made the second round as a team. I think we were more bonded today in this game and we had better teamwork.”

Christ Church started the game off well, utilising the size of CC #10 to establish some post presence. CC #10 was able to use her height to her advantage and she got the first basket in the post over the NV defenders. NV calmly responded with a baseline jumper from Shumin (NV #53) to knot things up. However, CC began to lose their grip on the game as they started to lose the rebounding battle. Despite their height advantage in the paint, CC could not match NV’s intensity and desire for rebounds, which allowed NV a lot of second chances to score.

The second quarter saw NV settle into a groove, as they were able to move the ball around offensively and looked to make open shots. However, they allowed CC to stay in the game due to their inaccuracy at the rim. This meant that CC still had a fighting chance as the game went to the half time break.

NV looked to close the game coming out of the break, as they were more tenacious on defence. This allowed them to generate turnovers and score on the other basket. However, their aggressiveness meant that they committed a lot more fouls on CC in the quarter, putting them into the bonus early and conceding free throws to CC. CC were able to keep themselves in the quarter via the free throws, but slowly saw the game fading from their grasp.

The final quarter saw NV seal the game decisively. Throughout the game, NV keyed on to the fact that CC #5 was crucial to the offence and they sought to pull her out of the game completely. NV threw double teams in a bid to keep the ball away from CC #5, content with the fact that they were able to take on the rest of the team 3-on-4. The strategy worked, as the CC offence crumbled once CC #5 was out of the equation. NV held on the rest of the game to seal the win.

The win means that NV are through to the second round of the North Zone qualifiers with a 2–0 record in the group. Christ Church are currently second in the group with a 1–1 record after beating Presbyterian High in their earlier game.

NV co-vice captain, Sammi Tan (#22), added:”The team is really happy as a whole to have qualified for the next round. We’re looking forward to our next match.”

NV co-vice captain, Xavlyn Yek (#7), also chimed in:”I think we’ll look to have more fast breaks in our next game and also improve our team defence at the same time.”