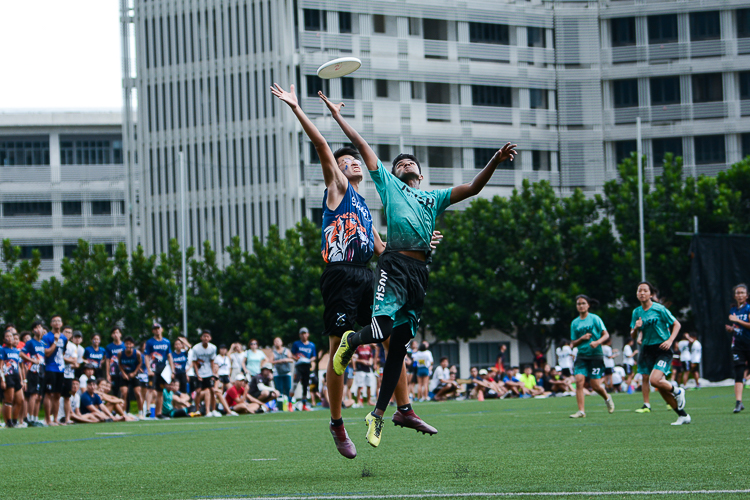 NUSH #13 rises up to contest the disc against an SAJC player. (Photo 1 © Zachary Foo/Red Sports)

The teams at this year’s tournament were seeded into four pools for the first day, with each pool consisting of six teams. Every team played four games of pool play and the games crossed over into the other pools. Seedings were determined at the end of the day based on win-loss record, with ties being decided on goal difference. Games were played to a hard cap of 11 points.

On the second day, the seedings are split into three groups — 1st-8th seeds, 9th-16th seeds and the 17th-24th seeds — and matches would be played in a single-elimination format. The winners proceed to the next round, while the losers play subsequent matches to determine their final placing.

One of the surprises of the day was when defending champions Raffles Institution (RI) Team A went down to EJC Team B 6–7 on universe point. EJC held the upper hand at 6–5 when soft cap was called. The ensuing point saw many turnovers from both RI and EJC as both teams desperately played out for the win.

EJC came close in the end zone on a couple of occasions, but failed to convert both times. RI held their nerve to even the scores up at 6–6 and brought up universe point. However, Julian (EJC B #81) ended the game in style with a hammer into the end zone that sent the EJC team into delirium.

But this was a mere blip on the radar for RI Team A, as they won the rest of their games in pool play to finish in seventh. This leaves them with a good chance to make a run at defending their title on Sunday, June 2.

We have made the effort to identify the players in the photos that we captured. If you recognise any of your friends in the photos, do post them in the comments below and we will update accordingly.