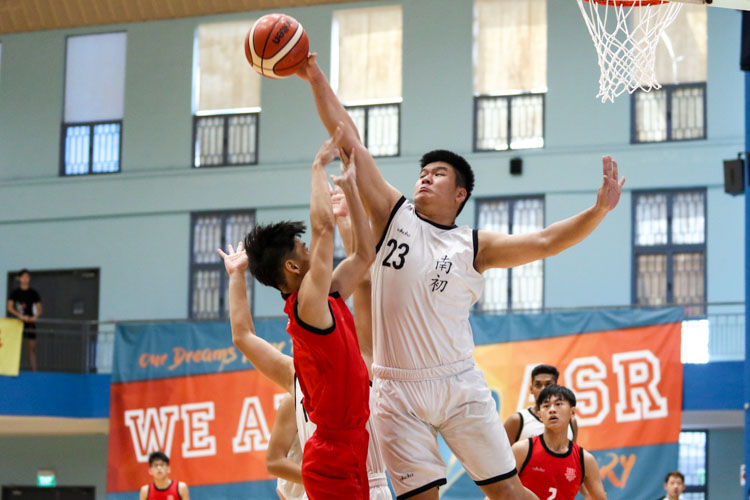 Jurong East Sports Hall, Thursday, May 23, 2019 — Nanyang Junior College (NYJC) rode on an inspired first half to topple perennial powerhouses Hwa Chong Institution (HCI) 66–52 in the third and fourth placing match at the National A Division Boys Basketball Championship. HCI tried to pull back in the second half but eventually fell short in their attempt to come back into the match.

NYJC captain, Avinesh S/O Sangaraju (NYJC #4) had this to say about the win: “We played our hearts out and we really deserved the win. Since we didn’t make it to the final, we decided to make the last game the best game.

“Before the game started, we already knew we wanted to start out strong. We were able to jump many HCI passes and get out on the fast break. This boosted our whole team’s morale, that’s why we were able to cheer for them and use the momentum to get through all their defences.”

NYJC came out strong in the first quarter, with their front court of Jeremy Teo (NYJC #23) and Enmao (NYJC #77) gobbling rebounds and initiating fast breaks. This allowed NYJC to build up on their lead in the quarter before a jumper by Ondre Tann (HCI #3) stopped the run.

HCI started to work their way back into the game with good defense midway through the quarter. However, they were let down on the offensive end when NYJC started to jump their passing lanes and got multiple steals. NYJC did well with their opportunities at the rim, converting their shots at a high rate and taking a 24–13 lead into the second quarter.

HCI found more success on the boards in the second quarter, as their players made up for their physical disadvantage in the post by boxing out for position. However, their offense was still suspect as they could not convert their shots every time they got to the rim. NYJC, on the other hand, encountered no such difficulties, extending their lead to 20 by the time the quarter ended.

The third quarter saw a reversal of fortunes, as HCI started out strong with a 6–0 run. NYJC adopted the strategy of pounding the ball down to Jeremy (NYJC #23) in a bid to take advantage of his physicality in the post. However, the double teams that HCI sent to stop him proved to be effective and shut him down.

Liang Enmao (NYJC #77) showed real grit and hustle on the bits, working hard to grab offensive rebounds and helping his team to extend the lead. Melvin Gho (NYJC #1) was also effective in the shift he put in during the quarter, hitting timely baskets in the quarter to maintain NYJC’s lead at 18.

Lim Jing Jie (HCI #2) looked to spark an HCI comeback early in the quarter when he jumped in NYJC’s passing lane and got the steal and score. However, Jeremy Teo (NYJC #23) helped kill any momentum with his work on the boards.

NYJC did well on the fast break and the boards in this quarter, as they showed the hunger to seal the game off. HCI tried to take back control in the match by putting out an aggressive defense. However, NYJC were able to pass themselves out of the trap defense, allowing them to seal the game.

HCI captain, Ondre Tann (#3) shared his thoughts: “NYJC played really well today. We put in all our efforts into the game and we hustled for every single ball. We showed them what the entire HCI team was and we were not ready to let them get third place easily.”

HCI vice-captain, Shin Donghun also chipped in: “For us, it doesn’t matter whether we win or lose. I think the journey that we shared together was the most important. It’s a bit sad that after this, the seniors have to graduate and the juniors will have to lead the future batch, it’s a little emotional thinking about that.

“We showed that we can come far without height or as many DSA students and we came really far as a team. Despite the injuries this season, our bench players really stepped up their game and did well. This team only had three J2s playing, so I believe that we will come back stronger next year. I want my juniors to keep the team culture that we had, keep pushing each other in training. The little things like encouraging each other and not scolding each other.”

Avinesh (NYJC #4) added: “This has been a really fun season, even though we did not make the finals, we ended the season on a high note and overall it was a very good season in the end.”