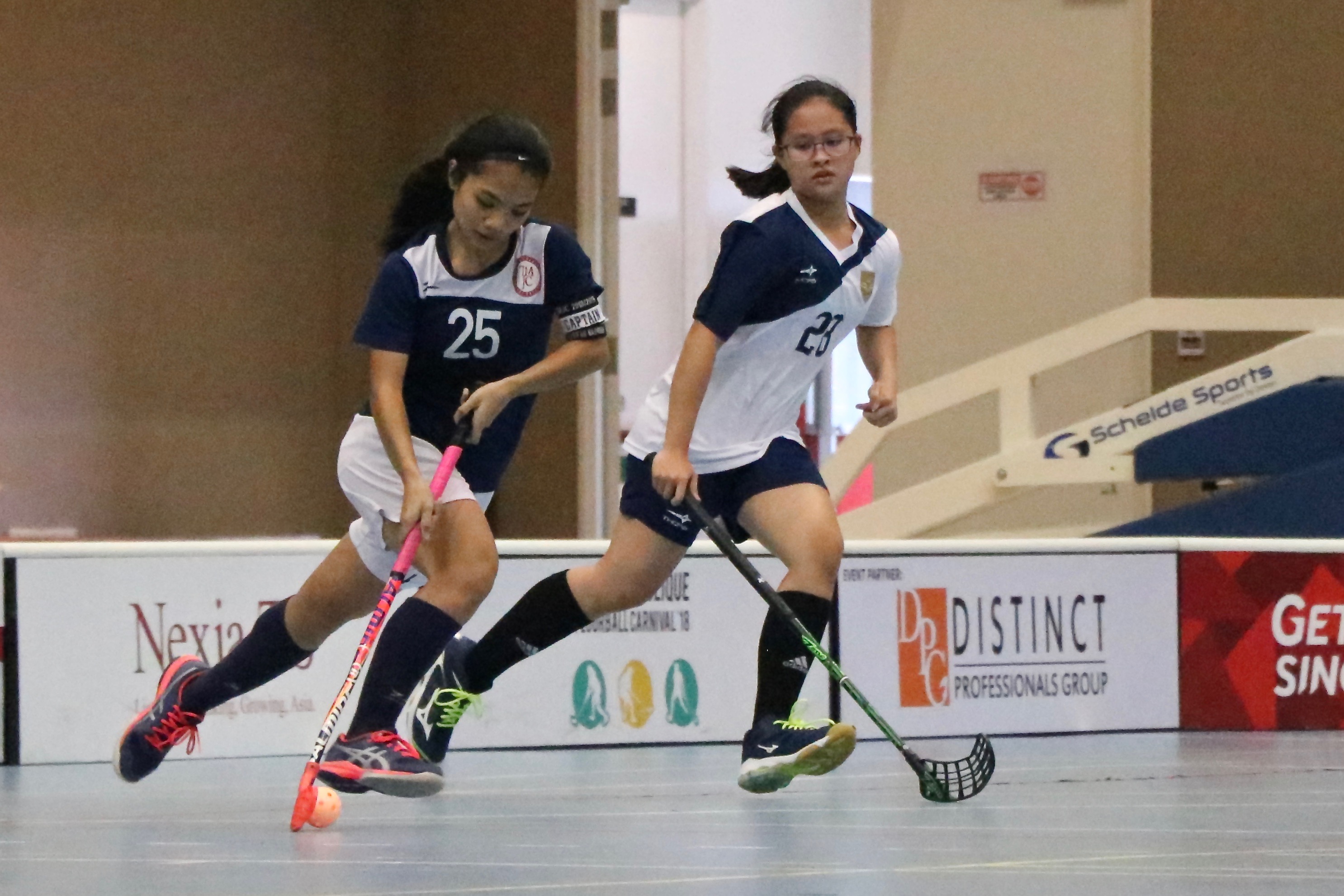 Sharifah Nadhrah Jamal Alhadi (#25) of TMJC in action as she brings the ball across the court. (Photo 1 © Julianna Jothi/Red Sports)

Our Tampines Hub, Tuesday, May 14, 2019 — For both teams, the National A Division floorball season started and ended the same way. In their first match of the preliminary round, Catholic Junior College (CJC) took traditional powerhouses Tampines Meridian Junior College (TMJC) by surprise in a tight 1-1 draw. This time, however, TMJC managed to maintain their prowess with a 3-2 win and clinched third position while CJC followed in fourth.

“Before the game, we wanted to all have fun since it was our last game together and I think we did exactly that,” shared captain Sharifah Nadhrah Jamal Alhadi (TMJC #25). “Although we did slip up towards the end and had a few mistakes that conceded a few goals, I’m still proud of my team for keeping their cool till the very last whistle.”

The game first saw a goal through a line effort, with help from crucial players Cloe Wong (TMJC #13) and Celeste Wong (TMJC #9) who took the ball from the corner. Cloe (TMJC #13) proceeded to slap the ball into the top corner.

In the second period, the game began to pick up the pace as more attempts were made by both teams. At the four-minute mark, Celeste (TMJC #9) gained possession of the ball to deliver a drag shot from the centre. The ball went past CJC’s defenders to solidify the second point of the match.

Just like their first preliminary game against each other, the anxiety level of both teams grew with time. This caused many mistakes to be made, in terms of passing and lack of accuracy with shots at goal.

Nevertheless, Nadhrah (TMJC #25) managed to actualise a failed goal attempt. When the ball tumbled away from the goalpost, she retrieved it from the side to cut in and shoot. The successful shot racked up the scoreline to 3-0 in what one would call a redemption from their previous game against CJC.

From a 1-1 draw to the result now, all odds seemed to be stacked against CJC.

But in the third period, there was a sudden burst of motivation on CJC’s side. With hunger evident in her playing style, Valerie Tan (CJC #5) grabbed hold of the opportunity of an open goal to score for her team.

TMJC grew more anxious at their slip up which caused the goal and made even more mistakes. When they conceded a two-minute penalty for one of their players in the last couple of minutes, it meant that TMJC were made to stay in box play, a disadvantageous spot to be in.

With CJC having the upper hand, they unsurprisingly scored a goal through Charlotte Loretta Lim (#88). The scoreline was then 3-2. The last minute saw the greatest intensity throughout the whole match, as CJC began to play the ball around the goalpost and even shot many times.

Nevertheless, the effort from TMJC’s defenders and keeper Norazirah Bte Mohd Amin (#30) allowed TMJC to leave the court with a victory.

When asked about the match, CJC captain Kai Ning (#9) said: “We had a great start and end to the season with TMJC. I could tell that everyone was really trying their best and pushing past their limits for every ball and that made me really proud. It showed me how hard they were fighting for the team.”

“Even though we were unable to make it a tie in the last few minutes, it was truly a wonderful and enjoyable match where everyone was playing their hearts out and wishing that the time would never run out.”

For Nadhrah (TMJC #25), she acknowledged their disappointment at failure to achieve their goal, but also expressed her pride in the team: “Although we wanted to get that gold medal so badly, it means nothing compared to the memories we forged throughout this difficult journey together.”