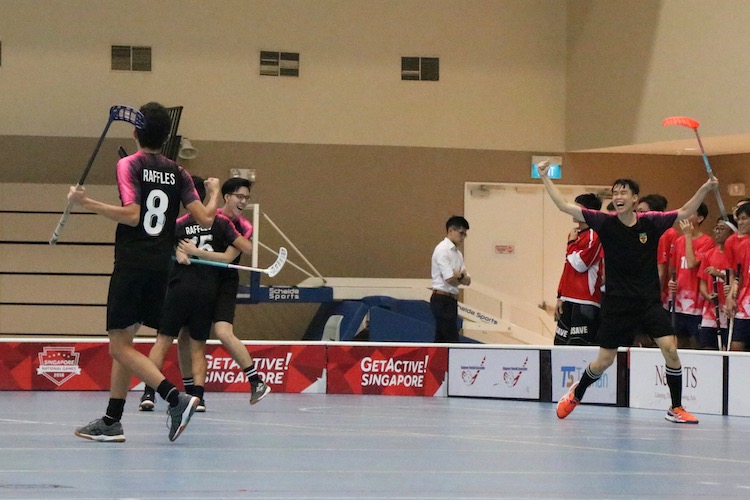 Our Tampines Hub, Tuesday, May 14, 2019 — In the last match of their run in the National A Division Floorball Championship, Raffles Institution (RI) went all out against River Valley High School (RV) during the fight for third placing. Despite failing to retain their championship title this year after a loss to Victoria Junior College in the semi-finals, RI did not lose heart but rather took control of the game to deliver an 8-0 result.

“With this game being our last match, I personally didn’t expect much results wise, but that they put in their best efforts,” shared RI captain Dylan Wong (#19).

Within two minutes, RI established their hunger to dominate the match by scoring the first goal through Jayden Tan (RI #7), who shot into the top corner beyond the keeper’s reach.

They continued to hold their ground by passing the ball around RV’s defensive formation, waiting for the right time to attack. The ball was mostly played between Muhammad Alfian (RI #13) and Andre Chan (RI #91), and their pair work kept ball possession far from RV’s reach.

According to Dylan (RI #19), their calm composure was intentional: “We played the game to our tempo right from the start and it really showed that we were calm and confident.”

Unfortunately for RV, their line change at an unfavourable timing cost them a goal when Alfian (RI #13) took the opportunity to attempt a shot at the keeper. While the ball went out, a free hit was awarded to RI and this led to a second goal, this time by Lau Bing Yang (RI #8).

RI continued to increase the frequency of their shots, though most were saved by RV’s keeper Chern Yeh Jou (RV #8). Nevertheless, a tactical game play in the centre area led to another goal from RI through a tap-in by Tyler Yeo (RI #12).

The second period saw an increased morale on RI’s side, who continued to force more shots at goal, while RV had no choice but to maintain a defensive stance. The scoreline racked up to 4-0 as Brandon Chen (RI #23) successfully managed to score a goal.

However, a call by the referee was made to take one man out of RI’s court, leaving RI with a disadvantage. This, however, did not stop RI from their numerous attacks, eventually resulting in two goals in by Andre (RI #91) and Tham Hao Wei (RI #17). Furthermore, Nigel Tan (RI #15) added another goal to leave the second period at 7-0.

Despite being down seven goals, RV continued to put on a strong front and refused to give up.

“Even though it was a big match, I wanted the team to fight regardless of the outcome and to focus on the process instead, which they did,” said a proud Sim Yi Sheng (RV #14). “They put a hundred percent effort into running and playing hard for the team.”

The last goal was scored by Andre (RI #91) in an impressive gameplay of a drop pass that was turned into a direct shot at the net.

Dylan (RI #19) acknowledged their disappointment in losing their title, but insisted that he was still proud of his team.

“This may not have been the result we wanted, but seeing them never give up and always sticking by each other makes me extremely proud of them,” he said.

“I’m very honoured to have been their captain and to have had the chance to play alongside them. For one last time, we played our hearts out as a team and had fun on court, together.”