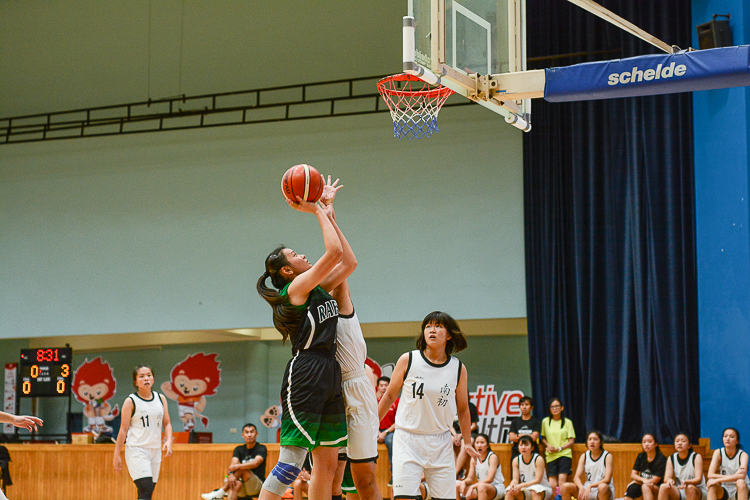 Tan Kang Yi (RI #12) scores a contested layup under the basket while Claudia Tan (NYJC #14) looks on. Kang Yi led all scorers with 20 points and helped earn her team a place in the final. (Photo 1 © Zachary Foo/Red Sports)

Jurong East Sports Hall, Friday, May 17, 2019 — Exactly a week ago, Raffles Institution (RI) went down to Nanyang Junior College (NYJC) 39–42 in overtime in Round Two of the National A Division Girls Basketball Championship. RI found themselves in a similar position this week, same opponents, yet another overtime game and similar adversity.

In a match with higher stakes and with the gods of elimination bearing down on them this week, RI simply responded: “Not today” and took their revenge by emerging 40–38 victors against the more-favoured NYJC. The win also sees RI return to the final and they will face Hwa Chong Institution for the title next Thursday.

RI captain Tan Kang Yi (#12) had this to say about the win: “I think it’s really amazing as our whole team did not expect to get into the top four. We did our very best today and I think it was very touching.”

Kang Yi (RI #12) led all scorers with 20 points, while Zhu Yezi (RI #7) followed closely behind with 9 points. Yezi (RI #7) also scored the only basket in overtime that decided the game. Vernice (NYJC #1) led her team with nine points, while Jermaine Lim (NYJC #10) had seven points.

The opening of the first quarter was all NYJC. Vernice (NYJC #1) hit a three to open the game, seemingly setting the tone for the rest of the game. RI suffered from sloppy passing on offense early on, allowing NYJC time to get set on defense and opportunity to create turnovers.

This led to a scoring drought for RI, as they went five minutes without a point until Kang Yi (RI #12) ended it with a shot under the basket. On the other hand, NYJC had a balanced scoring attack, as four different players all had baskets in the first quarter.

NYJC found particular success from three, as their ability to swing the ball created multiple open shots. Despite this, RI stayed resolute and slowly worked their way back into the game, trimming NYJC’s lead to four with a three-pointer by Mabel Ong (RI #10).

Mabel (RI #10) carried her shotmaking momentum into the second quarter, making another three-pointer to open the second quarter. RI came out of the gates looking like a different team, as they were more focused on both sides of the floor. Their offence started to find its groove with their passing and RI as a whole looked more resolute on the boards.

Yezi (RI #7) was particularly effective for her team, snagging multiple offensive rebounds and giving her team a lot of second chances to score. NYJC easily generated open shots from three against the zone defense of RI, however, they suffered from a cold shooting streak that saw multiple shots rim out. Fortunately, Jermaine (NYJC #10) was able to nail a leaning jumper to the left to end the cold streak towards the end of the quarter.

The third quarter was a tightly contested affair as both teams tried to find a way to pull away with the lead. NYJC were stronger on the boards in the period, as their players adjusted to the bouncier rims here and was able to get into good positions. One such possession saw Vernice (NYJC #1) make a three-pointer after two straight offensive rebounds from her team.

RI also did well on the offensive end as they got into the rhythm with dribble drives in a bid to create space. Kang Yi (RI #12) did well to navigate the double team each time to score in the post. However, RI’s momentum was seemingly halted when Mabel (RI #10) picked up her fifth foul in the quarter and fouled out of the game.

This was a blow for RI, as Mabel (RI #10) was very effective on the offensive end for her team with her scoring and passing ability. Nevertheless, the RI team was able to go into the final quarter only one point down, with Aw Ziyann (RI #11) and Freda Wee (RI #13) both stepping in to cover Mabel’s position.

Both teams traded blows in the final quarter. RI drew first blood through Kang Yi (RI #12), who scored a jumper from the top of the key. NYJC responded with baskets from Amabelle (NYJC #2) and Elke Goh (NYJC #7). Kang Yi (RI #12) then scored again after a series of smart passes from RI found her unguarded under the basket for an easy score.

Towards the end of the quarter, the scoring dried up as both teams began playing more conservatively and looking to conserve the lead. Freda Wee (RI #13) managed to keep her composure to score one free throw to tie the game at 38-all with 54 seconds left. Both teams tightened down on defense in the final 54 seconds, not letting the other score at all. In what must have been a deja vu moment for both teams, the game entered into overtime.

In the overtime period, it was obvious that fatigue started to set in for both teams. Shots were falling short and players struggled to find offensive rhythm. NYJC shooting woes resurfaced again in this period, as they had multiple open shots but were unable to convert.

The deciding basket came in the middle of the period, when Yezi (RI #7) made a runner in the lane after a fast break. The final 30 seconds was a tense one for RI, as NYJC came away with multiple offensive rebounds.

However, NYJC were unable to convert any of these opportunities and RI emerged 40–38 victors in the end. The RI bench erupted into cheers after the final buzzer sounded, as they vindicated themselves after having gone down to the same opponents in the quarter-final group stage.

RI captain Kang Yi (#12) added: “Our mindset was similar to the previous time we faced NYJC, just that this time round, we came into the game with nothing to lose as we have two games left in our season, so we gave it our best shot.”