National A Div Girls Basketball (Semis): HCI cruise to 62-42 victory over NJC to advance to final 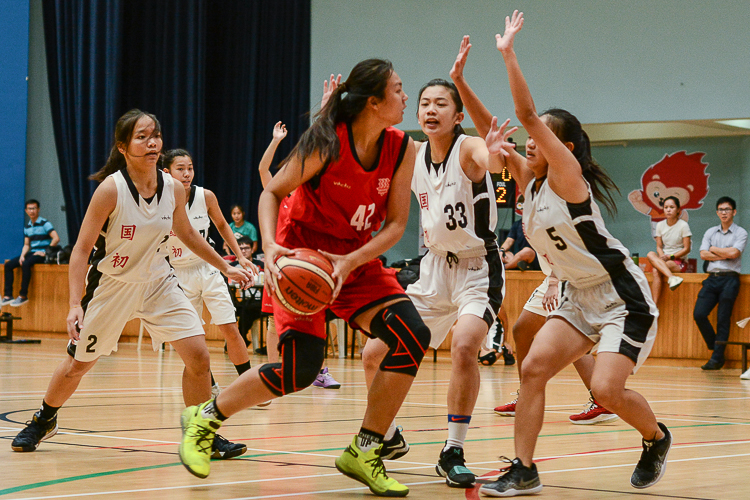 Jurong East Sports Hall, Friday, May 17, 2019 — Hwa Chong Institution (HCI) dispatched National Junior College (NJC) 62–42 in the semi-finals of the National A Division Girls Basketball Championship to move on to the championship-deciding game.

HCI showed their class in the first quarter. Even though they struggled to score the ball at the rim in the half court, they were able to impose themselves against NJC on defense. This allowed HCI to generate turnovers and score easily on fast breaks. NJC shook off their initial rust and found some rhythm towards the end of the quarter to keep HCI’s lead at seven.

HCI’s swarming defense to start off the second quarter flustered NJC, as they kept making passes that went into the arms of a HCI player. On the other end, NJC looked to neutralise Qun Fang (HCI #42) in the post by sending double and sometimes triple teams to stop her from scoring.

Qun Fang (HCI #42) showed cool composure to pass out of the post to open players like Silin (HCI #14), who punished NJC with her shots from the outside. Ning Xuan (HCI #11) was particularly effective for HCI, as her baseline cuts allowed her to score easily from under the basket.

Despite this, NJC were able to keep pace with HCI in this period as they soon found their groove on offense and started making shots.

HCI flexed the superiority in the third quarter, easily breaking through the full court press that NJC set up. NJC intended to cut down the lead through the press, but it failed spectacularly as HCI showed that they were prepared for it by passing out of it with no issues.

NJC did have some moments, as there was a point in the period where the lead was trimmed to six after two consecutive three-pointers. However, HCI showed their resilience by pushing hard on offense and taking advantage of an NJC defense tired out from using the press. HCI scored in unrelenting waves from three-point land and pushed the lead to 18 at one point in the quarter.

The final quarter saw HCI slowly take the game out of NJC’s hands, building up a substantial lead and clamping down on defense. NJC tried to find their way back into the game, taking more shots from three in the hopes of trimming HCI’s 22-point lead.

Rachel Tan (NJC #2) did provide a sliver of hope after nailing two consecutive three-pointers, but it was too late for NJC with only two minutes remaining in the game. HCI emerged 62–42 victors in the end.

HCI captain Li Qi (#9) said: “We are all very happy to make the finals. We worked very hard and proved to everyone and ourselves that we have the capability of entering the finals. We’ve prepared for teams like RI all along and will look forward to facing them.”