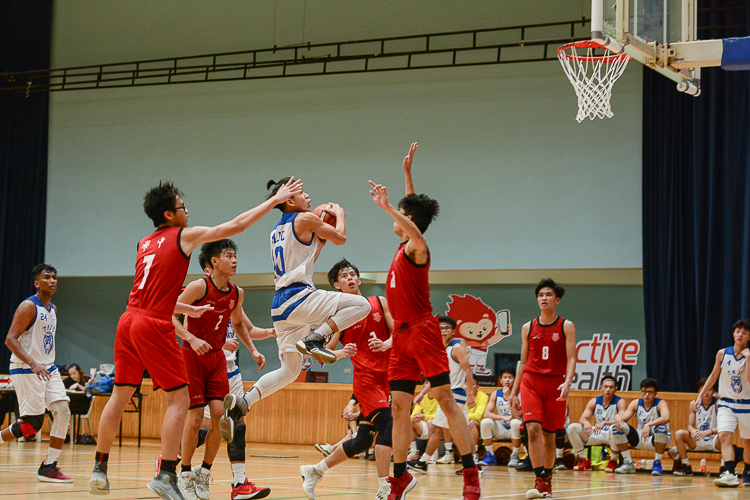 Tiong Chuan Yao (TMJC #10) rises up in traffic and scores past the whole HCI team. Chuan Yao led all scorers with 27 points to send TMJC to its first final in school history. (Photo 1 © Zachary Foo/Red Sports)

TMJC captain Tiong Chuan Yao (TMJC #10) had this to say about the win: “This is the first finals for us. I have had such experiences before playing with North Vista (in B and C Division), but many of my teammates have not experienced reaching the top four before or even coming here to Jurong East to play.

“Thus, it was the first experience for many of us and it was good that we got past HCI in the semi-finals as they are a very tough team. They play really aggressive and they run hard, so we had to match up to them.”

Chuan Yao (TMJC #10) put in a dominating display, slicing and dicing his way to 27 points to lead all scorers. Jovan Wong (TMJC #5) followed closely behind with 12 points. HCI were paced by the sharp shooting of Chin Jhin Tee (HCI #13), who poured in 16 points. Lim Jing Jie also contributed 13 points to his team’s cause.

TMJC hit the ground running, going on a 9–0 run to start the first quarter. Chuan Yao (TMJC #10) and Gan Qing Yang (TMJC #4) took advantage of their superior speed to cut through the HCI defense for easy baskets. Ondre Tann (HCI #3) stopped TMJC’s run with a floater in the lane three minutes into the quarter.

As a whole, TMJC looked to have outmatched HCI physically both on the boards and the break. TMJC’s players were faster on the counterattack and outmuscled the HCI players for rebounds. Defensively, TMJC were also able to bother HCI players when they took shots at the rim, causing them to miss many shots. This allowed TMJC to build a 17-point lead going into the second quarter.

Showing their pedigree, HCI climbed back into the game in the second quarter. HCI went on a 17–0 run to start the quarter, getting the important stops on defense and making fundamental plays on offense for easy baskets.

TMJC did not help themselves as they continuously turned the ball over during the run, at one point giving the ball away five times in a row. Dorian Chin’s (TMJC #23) putback six minutes into the quarter finally put an end to TMJC’s scoring drought and helped shift the momentum back in their favour.

After being knotted up, TMJC scored six straight points to give them some breathing space heading into the second half. Towards the end of the quarter, HCI suffered a blow as Isaac Soh (HCI #17) sustained a leg injury and had to leave the game after Chuan Yao (TMJC #10) accidentally barged into him while trying to stop him.

HCI introduced a new wrinkle into their offense in the second half, having two screeners in the high post to free up a cutter to the rim in the middle. It was initially effective as TMJC seemed to have no answer for it.

TMJC again suffered from a scoring drought early in the quarter, due to their sloppiness in execution on offense. However, they were still in the lead as HCI struggled with their accuracy at the rim and missed multiple layups.

Kole Peralta (HCI #8) pulled HCI within single digits with a three-pointer, but Chuan Yao (TMJC #10) responded with a couple of jumpers after to restore TMJC’s lead to 11 heading into the final quarter.

The final quarter was a high-scoring affair, as both teams looked hungry to want a place in the final. Chuan Yao (TMJC #10) again was pivotal for his team as he was both scoring and distributing the ball around on offense. He was supported on the perimeter by Qing Yang (TMJC #4) and Jovan Wong (TMJC #5) who both were happy recipients of his assists.

Jhin Tee (HCI #13) came up clutch for his team in the quarter, scoring multiple three-pointers to keep HCI within striking distance. However, TMJC’s offense was too much for HCI to handle and they could not make up their deficit in the final period. Jovan Wong (TMJC #5) made a three-pointer and a free throw to keep the game out of reach of HCI.

As the final buzzer sounded, the raucous TMJC crowd and the TMJC bench erupted into cheers as they were well aware of the significance of the win.

TMJC captain Chuan Yao (TMJC #10) added: “Anderson Serangoon Junior College will be a tough opponent in the finals as they are three-time finalists and have a lot of experience. We will try to play as hard as them and given that this will be the final game, we will be going all out to try and defeat them.”