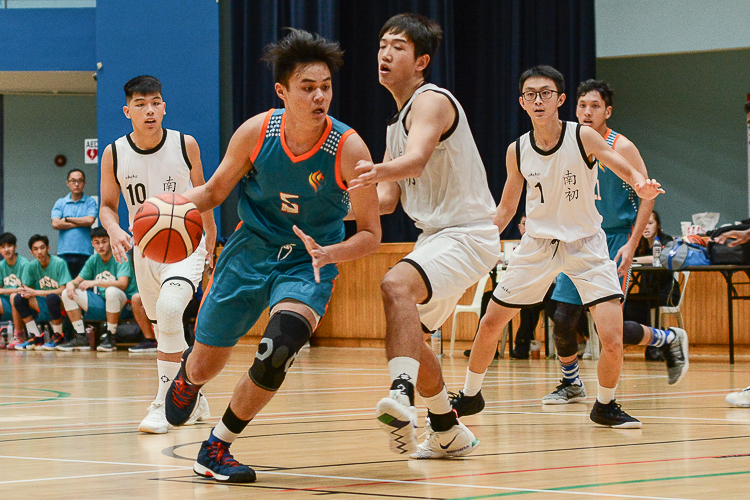 ASRJC captain Tan Jing Jie (ASRJC #9) had this to say: “I think it felt really good. We actually did not expect that we would make it. My personal goal for the team was to make top four, but we played well today and managed to clinch a place in the finals.”

ASRJC started off the game strong, as Lim Qi Heng (ASRJC #12) nailed two three-pointers in a row to give them an early lead. ASRJC’s half-court defense was active and cut off many passing lanes. This led to many steals and fast breaks for ASRJC.

NYJC eventually shook off their sloppy passing and worked into a groove, working their passes along the perimeter to create open shots. The latter stages of the quarter saw both teams trade jumpers with each other, with both teams seemingly scoring on every trip down the court. The quarter ended with ASRJC holding a seven-point lead.

The opening possessions of the second quarter drew many cheers from the crowd. Firstly, Jeremy (NYJC #23) went up strong to deny Keith (ASRJC #21) on the way to the rim. On the ensuing fast break, Qi Heng (ASRJC #12) paid back in kind by blocking Enmao’s (NYJC #77) layup at the rim. Both times struggled to score until three minutes into the quarter, when Qi Heng (ASRJC #12) nailed a three-pointer.

ASRJC pulled out the Horns set in the second quarter to try create space in the middle of the court for the scorers to work with. This proved to be effective as Keith Tan (ASRJC #21) made use of this space to get to his spots and score. Avinesh (NYJC #4) and Glenn Tan (NYJC #10) kept their team in the game with made jumpers. ASRJC took an eight-point lead going into the second half.

ASRJC were more physical on the boards in the second half, snagging many offensive rebounds and creating second chance opportunities. Keith (ASRJC #21) found a lot of success utilising the pick and roll with his frontcourt teammates to get to his spot near the foul line, allowing him to nail the easy jumper.

NYJC found more success on offense with their dribble drives, but the ASRJC frontcourt did well to bother their shots and induce misses. While Atif Nainar Hussain (ASRJC #7) was taking his free throws in the quarters, an NYJC supporter shouted out “Miss ah!” in a bid to throw him off. This worked as Atif missed both free throws on his trip to the line.

However, karma came back to bite NYJC, as they coughed up the ball on the ensuing possession and conceded an easy basket on the fast break. ASRJC imposed their authority in this quarter, stretching the lead to a comfortable 12 points.

The final quarter saw ASRJC pull away and pile onto their lead. Avinesh (NYJC #4) fouled out of the game with eight minutes remaining, due to the fact that ASRJC kept drawing fouls on him on their drives to the rim.

NYJC struggled to get their shots to fall in this quarter, which did not help their cause at all in trying to cut the lead down. ASRJC relied on creating easy shots for themselves through good crisp passes, finding the open man each time and converting these opportunities.

The lead eventually ballooned past the 20-point mark and ASRJC soon found themselves marching back to their third straight appearance in the final.

Said ASRJC captain Tan Jing Jie (ASRJC #9): “We have already faced Tampines Meridian Junior College multiple times over the course of the season and have lost each time, but we will be training hard in preparation for the finals and hopefully it will be a good game between both teams.”