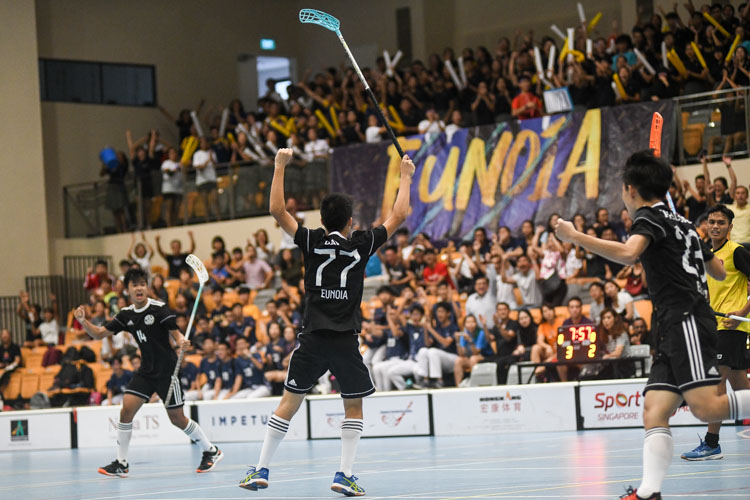 Our Tampines Hub, Wednesday, May 15, 2019 — There were only 30 seconds left on the clock. Eunoia Junior College (EJC) were on the brink of a historic title with a 4-2 lead in the National A Division Floorball final. But the boys from Victoria Junior College (VJC) were not about to back down.

As the VJC players huddled round for a final time-out, the instructions from their coach were simple: “Turn, pass, shoot.”

Twenty-one seconds to go. Turn, pass, shoot. VJC scored. Their celebrations were muted as they wasted no time to restart in search of the decisive equaliser. VJC threw everything they had in the final few seconds, but it was just too little, too late.

The final buzzer went off to put an end to a breathless encounter between two undefeated teams this season, as EJC emerged 4-3 winners to clinch their maiden floorball title.

It is only EJC’s third year competing in the championship, and their win is only the school’s second sports title in its three-year history, adding to its recent victory in girls’ hockey.

“I think today we played our best game ever,” said Eunoia captain Cheang Jia Qing (EJC #83). “We were extremely disciplined, we trusted each other throughout the whole game, and we really fought till the last second. That’s what really allowed us to overcome the last hurdle, the hardest hurdle.”

But the Eunoia boys were in no way newbies. At least half of the team — Jia Qing included — came from Catholic High School, regular title contenders in floorball’s B and C divisions.

And EJC’s seasoned floorballers certainly showed their prowess — they won all their games this season except for a 6-6 draw with same opponents VJC in the group stage, scoring 47 goals and conceding 14 en route to picking up the trophy.

“I think the mentality from the first game — whenever we’re up or whenever we’re down — is that the score is still 0-0,” said Jia Qing. “We would always keep telling ourselves that it’s 0-0 and that anything can happen. So we are never out of the game or never won the game until the last buzzer sounds. That’s what we’ve always focused on, and how we’ve always played for all our games.”

And the final was no exception. Four minutes into the game, EJC found themselves one-nil down. This was in spite of them applying the early pressure, but a mistake saw Mikail Sumono Ramli (VJC #23) intercepting the ball on the right and dragging a shot into the top left corner of the net.

EJC had the better share of chances, but at that point it seemed that luck was not on their side. Their breakthrough finally came four minutes from the end of the first period, with skipper Jia Qing (EJC #83) equalising for his side. A loose ball in their attacking semi-circle made its way to Jia Qing with only ‘keeper Shaun Tay (VJC #88) to beat, and he duly slapped a shot into the roof of the net.

The tide had turned. EJC’s confidence grew second by second, and they looked threatening each time they marauded forward. Alvan Chan (EJC #91) soon gave them a 2-1 lead before the interval with a drag shot from the right flank.

But it was still anybody’s game, according to VJC vice-captain Muhammad Asy’raf (#68).

“Firstly when we went one-nil up, our team was still fully focused on the game,” Asy’raf said. “We did our best not to get ahead of ourselves, because we knew that the game hasn’t ended yet until the final whistle.

“During the team talk, we just held our heads high, we didn’t give up hope, and we knew that we had a lot in us to come back from the deficit, because we believed in our ability and we were just cheering each other on during the break.”

Period Two got off to where the game left off — end-to-end, with both sides relentlessly taking turns with possession and shots at goal. But goalies Shaun Tay (VJC #88) and Raymin Pek (EJC #1) stood their ground inside their box, denying numerous scoring opportunities.

Edgar Kwa (EJC #14) — who scored a hat-trick in the semis — was instrumental for Eunoia down the middle, consistently displaying deft stickwork to get past defenders and create openings. Four-and-a-half minutes before the end of the second period, Edgar extended EJC’s lead to two with a decisive strike from the right wing.

Just when it seemed like all momentum had swung to the boys in black, the yellow-clad Victorians shifted the pendulum again when they pulled a goal back via Amir Hamdan (VJC #25) just seconds before the period ended.

“Throughout the game, we really didn’t give up,” said Asy’raf (VJC #68). “We knew that we had it in us to try to get back in the game. We’ve done it before so many times in the earlier rounds, in the earlier games, and we knew that if we did our best, we could somehow do it.”

VJC upped their tempo in the final period, but Eunoia matched them play-by-play and converted their fourth goal seven minutes in. After good stickwork by Keanen Poon (EJC #92) down the boards and behind the goal, the ball was laid off from the left to an awaiting David Ethan Ng (EJC #77), who swiftly struck the ball into the net for 4-2.

Eunoia continued playing with the swagger of newly-minted champions, before the late time-out and goal by Asy’raf (VJC #68) 21 seconds from time gave VJC some glimmer of hope.

Alas, it was not meant to be for the Victorians as Eunoia stepped up to the throne as floorball kings, ending Raffles Institution’s dominance of four titles in the last five years. VJC, champions in 2017, settled for silver.

“Unfortunately the result was not so, but I’m still very proud of the team for always pushing and still trying to get the goal in that last 20 seconds,” Asy’raf (VJC #68) concluded.

Echoing the same sentiments, VJC captain Darius Phua (#67) said: “We went into the game and we really put in our best, and we really worked together as a team. And even though it’s a loss, I think we should still be proud of ourselves, because we really did quite well today.

“I think looking at it, EJ really outplayed us and they really deserved the win. So we got to give it to them for the win, and I guess we just have to come back stronger next year.”

For Eunoia captain Jia Qing (#83), his team’s dream run caps off his schoolboy floorball journey on a high.

“I think no one really expected us to go this far, but throughout the preliminary stages we really showed the opponents what we could do, and that we are a team that poses a threat to other teams,” he said.

“I think the most important thing, at least for EJ floorball culture, is that whatever happens, we’ll always believe in each other. Even if our skill isn’t as good as our opponents, or even when we are having a bad run, we should always trust each other, push each other, and always be determined and persevere through the hardships.