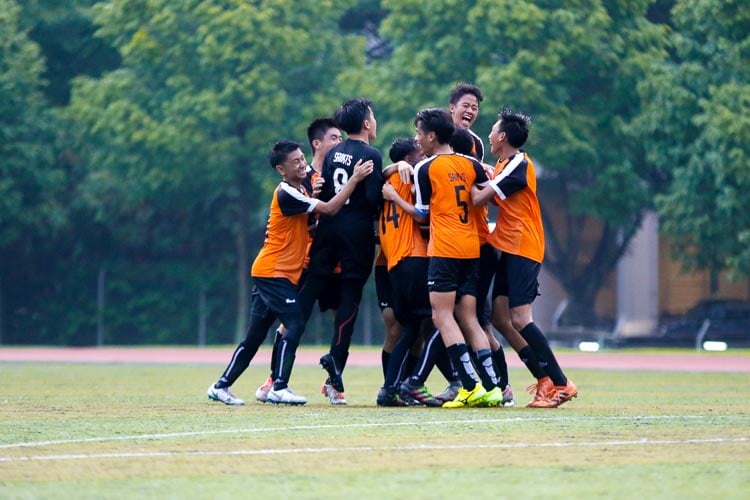 SAJC players celebrating after Darren Leong (SAJC #3) converts his penalty to send SAJC through to the final. (Photo 1 © Clara Lau/REDintern)

Nanyang Junior College, Monday, May 13, 2019 — St. Andrew’s Junior College (SAJC) narrowly edged past last year’s silver medalists Tampines Meridian Junior College (TMJC) on penalties, to book their spot in the National A Division Football final for the first time since 2014. The match went into penalties as the game was tied 1-1 after extra time.

In the last 15 years, this is also the only time apart from 2013 that TMJC — previously Meridian Junior College — have failed to qualify for the final.

SAJC head to the final where they will face Victoria Junior College (VJC), who beat Nanyang Junior College 4-0 in the other semi-final. SAJC have already faced VJC in the group stage, where they earned a 1-0 victory over last year’s champions.

Said SAJC keeper Caleb Ng (#8): “I feel very happy about the match because we fought all the way and gave it our all. We supported each other in every way we could, and not giving up until the final whistle.”

SAJC entered the match pressing hard from the start, getting a shot at goal in the first minute of play. The ball was set for the top right corner of the net, but a spectacular save by TMJC’s custodian Antonio (#1) ensured the scoreline sat at 0-0.

Just when it seemed SAJC were set to score, a counter-attack by TMJC led to the first goal of the match in the fourth minute of play.

Owing to a miscommunication between the SAJC keeper and his defense, TMJC were able to break through and were left with an open goal. Luqman Hakim (TMJC #14) scored the match’s opening goal as the ball rebounded off him and rolled into the goal.

With the goal scored so early in the match, SAJC were quick to look for the equaliser, but were unable to break past the TMJC defense. This led to a back-and-forth between both teams for the most part of the first half.

In the 17th minute, SAJC were awarded a freekick after a handball by TMJC. The freekick, taken by Naden Joshua (SAJC #10), was set to go in, but the TMJC defense were quick to react, his effort headed away at the last minute.

In the 31st minute, TMJC almost scored their second goal of the match, after Hameezan (TMJC #23) drove a low ball towards goal. However, his shot was saved by SAJC keeper Caleb (SAJC #8).

During half-time, the lightning alert came on, prompting a delay in the start of the second half — with the match only resuming after an hour and a half.

Having taken the lead earlier in the game, TMJC were sitting back more defensively in a bid to hold their advantage, while SAJC were the side attacking more.

Just two minutes into the second half, SAJC almost scored through Ahmad Yusuf (SAJC #9). Beating past the TMJC defense, it was a repeat of the sequence leading up to the first goal. However, SAJC were not as lucky, the ball rolling just inches past the far post.

The second half consisted of SAJC attempting to find different ways to penetrate into the TMJC box, but were unsuccessful in their multiple tries.

However, their perseverance was rewarded through a breakthrough two minutes from full-time, with Ahmad Yusuf (SAJC #9) finally getting his goal. The goal came after a corner kick by Naden Joshua (SAJC #10) was received by Ahmad on the volley to send an unsaveable shot into the top of the net.

On his teammate’s goal, Caleb (SAJC #8) said: “I was overjoyed when he scored, because from my position I never expected the ball to go in and we really needed the goal.”

With the score tied at 1-1 after full-time, the game was set to go into extra time — two halves of ten minutes each.

SAJC almost took the game in the fifth minute of the first half, when Makito Hayashi (SAJC #33) drove a low ball towards the far side of the net. However, his shot went wide, rolling past the left post.

With no goals scored during extra time, the match was set to be decided on penalties.

Stepping up to the spot, SAJC’s fourth penalty taker Darren Leong (SAJC #3) had the chance to send his team into the final if he scored his penalty. All three of TMJC’s penalty takers had their shots blocked by SAJC keeper Caleb Ng (SAJC #8).

Calmly taking his penalty, Darren sent his shot into the top right of the net, to the delight of his team and the SAJC crowd alike.

Said SAJC keeper Caleb (SAJC #8): “I was in shock and disbelief, because never did I expect us to come this far in the tournament.”

With the final approaching, Caleb had words of encouragement for his team: “We have gotten this far and we are not content yet. We have to give it our last push and and go all out on Friday — we have nothing to hold us back anymore. We are going to do this for our team, and for our school.”

Red Sports approached TMJC after the game but they declined comment.

SAJC will look to dethrone reigning champions VJC in the final at 3pm on Friday, May 17 at Jalan Besar Stadium. Heading into the bronze medal match, TMJC are set to face Nanyang Junior College at 3pm on Thursday at Our Tampines Hub.