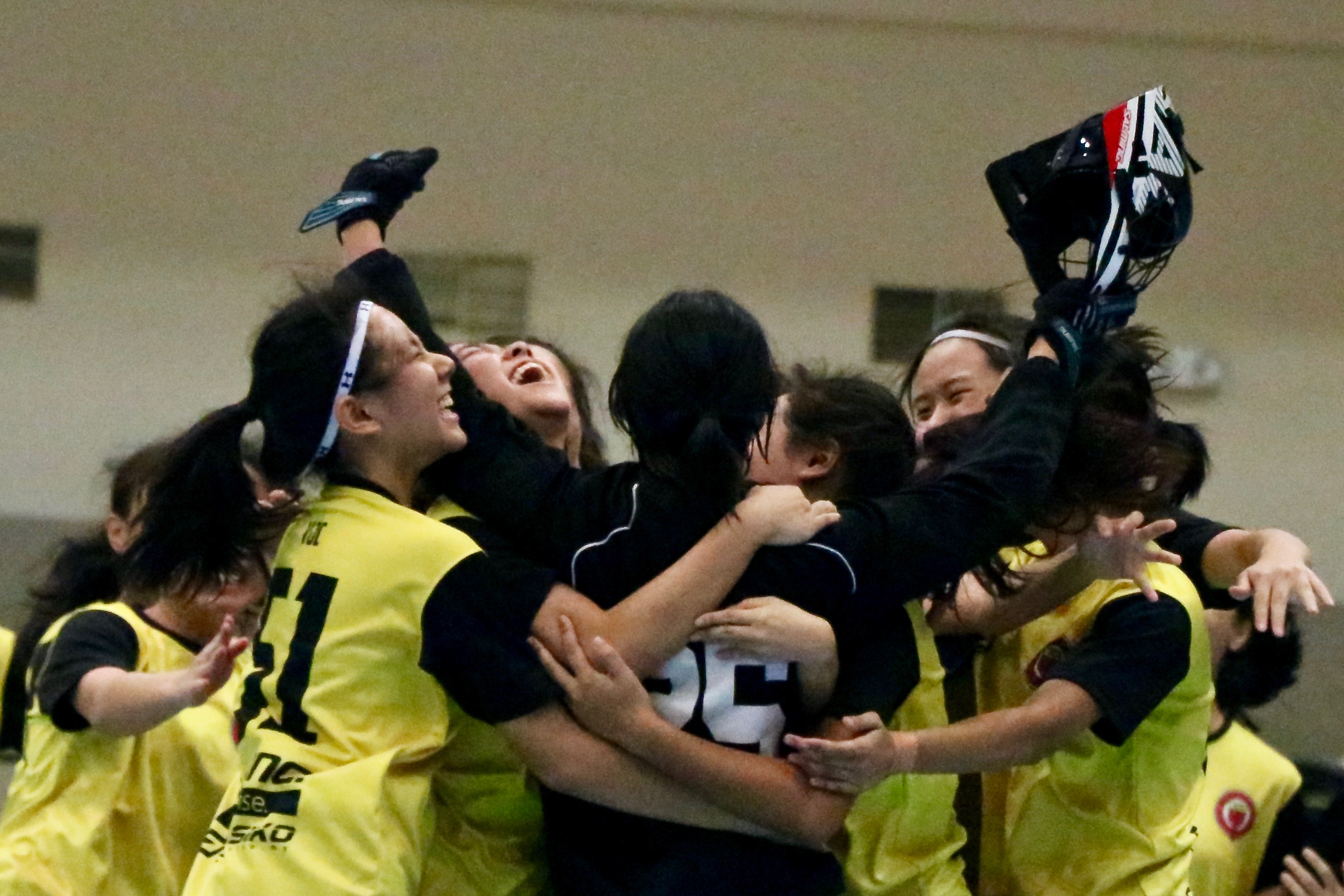 VJC celebrate as they clinch a spot in the final after defeating defending champions TMJC. (Photo 1 © Julianna Jothi/Red Sports)

VJC clinched victory with a 2-1 score on penalties after the match ended 3-3 in regulation time.

“Honestly, this match was anyone’s game,” said Caluza Denise Jazmine Carnate (VJC #23). “Both teams are evenly matched in terms of physicality, skills and speed. What our team really focused on was to give our hundred percent, and be hungry for the ball.”

While the first shot was released by Eugenia Poon (TMJC #7), Megan Ng (VJC #45) halted the goal attempt and wasted no time in reverting to a swift counter-attack. Though it was not on target, the offensive capabilities of both teams were established.

Throughout the first period, VJC demonstrated stronger firepower by consistently increasing the frequency of their shots at goal. Belle Koh (VJC #18) took a drag shot from the centre, but a goal was denied by Eugenia (TMJC #7) who firmly stood her ground in front of her goalpost.

With only a few seconds in between, exemplary team dynamics between Megan (VJC #45) and Belle (VJC #18) almost put the ball in the back of the net.

Norazirah Bte Mohd Amin (TMJC #30) demonstrated stellar effort, saving multiple shots, even the next one at the top corner of goal by Chan Jing Xuan (VJC #24).

In the last two minutes, VJC were down to only four players, due to a line change that took place beyond the substitution line. To make matters worse, Chan Shi Hui (VJC #56) was then called to sit out for the remaining two minutes for foul play, leaving only three VJC players on court.

Anticipation escalated as TMJC reverted to an aggressive powerplay while VJC steadied themselves in a stoic boxplay.

While there were many attempts by Sharifah Nadhrah (TMJC #25), VJC demonstrated an impregnable defence by refusing to concede.

Both teams were on par in terms of strength and this led to a 0-0 to be reflected on the scoreboard by the end of the first period.

It was within minutes into the second period that Megan (VJC #45) took possession of the ball to drag it from opposite ends of the post to accurately shoot past the keeper and break the deadlock.

Being the first to score, VJC’s morale was bolstered, with Shi Hui (VJC #56) riding on the wave to attempt another shot within seconds. However, it was a failed attempt and TMJC wasted no time to counter-attack.

Hunger from TMJC earned a reward when Farah Bte Abdul Rahim (TMJC #12) scored an equaliser by rolling the ball in to make contact with the net.

Despite the equaliser, VJC’s players were not shaken and proceeded to regain their lead with two goals through Mavis Ng (VJC #34) and Wu Qianwei (VJC #51).

This led to TMJC going into the third period with two points down, though they refused to hold back their firepower and started to take more shots at goal. Azirah (TMJC #30) saved a shot from VJC, only to send down a hard throw to the forwards on the opposite end of the court.

The aggression proved worthwhile as Nadhrah (TMJC #25) received the ball and delivered a swift shot at goal to cut her team’s deficit to just one.

The eventual equaliser was scored by Farah (TMJC #12), who strategically went behind the goalpost to serve a well-timed wrap.

With the game tied at 3-3, a nerve-wracking penalty shootout ensued. While Farah (TMJC #12) scored the first penalty, Megan (VJC #45) and Shi Hui (VJC #56) managed to hold their ground and score the last two points for their school after VJC goalkeeper Ulfah Irdina (#25) stopped every other TMJC penalty.

With that, VJC emerged as winners, kicking out their long-running rivals TMJC to advance to the final where they will be facing River Valley High School on the 15th of May. It is VJC’s first final appearance since 2012, when they also last won the title.

“The win was really well-deserved,” mentioned Denise (VJC #23). “We’ve been through a lot to get this far. It is our first time advancing to finals so we are very happy about the result.”

On the other hand, it is the first time that TMJC — previously Meridian Junior College (MJC) before the merger with Tampines Junior College — miss out on the final since 2013.

“I felt that we really gave it our all,” shared TMJC captain Nadhrah (#25). “When we were down, we kept our cool and did not let the score affect us. And we eventually equaled the score.”

“While I won’t lie that I am not disappointed with the results, I can say that I’m very proud that the girls showed strong team spirit and determination to come back, giving it our all till the end.”