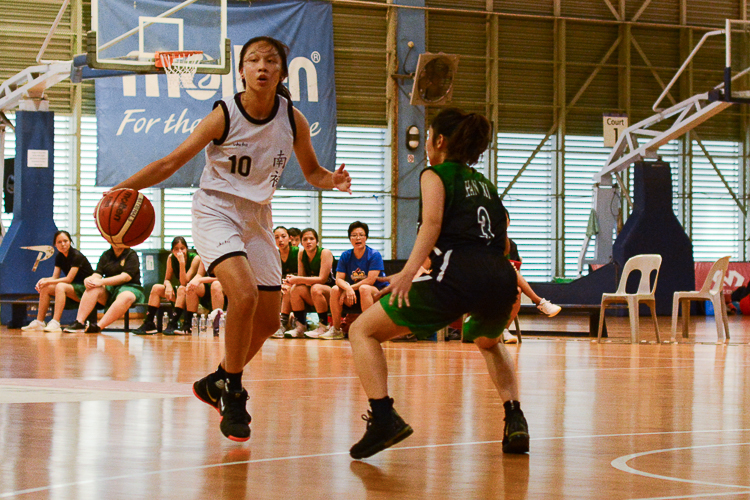 Singapore Basketball Centre, Friday, May 10, 2019 — Nanyang Junior College (NYJC) held off a spirited Raffles Institution (RI) squad to clinch an overtime 42–39 win in the quarter-finals of the National A Division Girls Basketball Championship.

Jermaine Lim (NYJC #10) led all scorers with 20 points, while making many clutch shots to keep her team in the game. On the other side, Tan Kang Yi (RI #12) led her team with 12 points.

RI came out strong in the first quarter, putting up 10 unanswered points. NYJC seemed to struggle with their outside shooting as nothing was going in. Their only reprieve came from a 3-pointer made with eight seconds left in the quarter.

The second quarter was a slog between both teams. NYJC kept generating open looks from the outside against RI’s 2-3 zone defence, but they could not convert. RI also did not help their cause as they gave up multiple offensive rebounds, allowing NYJC to pepper the basket from range continuously. However, NYJC’s shots started to fall towards the end of the quarter, punctuated by a 3-pointer by Jermaine Lim (NYJC #10) that beat the buzzer. The shot sliced RI’s lead to one at the half.

Both teams were evenly matched in the third quarter and struggled to score. RI was plagued by sloppy passing and struggled to create offensive opportunities. NYJC on the other hand could again create open looks but did not convert on any again. NYJC managed to pull even with RI at the end of the quarter and both teams went into the final quarter tied 21–21.

The final quarter was a more open and tense affair. RI broke away initially through scores from Tan Kang Yi (RI #12) and Han Xi (RI #12). However, Jermaine Lim (NYJC #10) caught fire for NYJC, making three consecutive 3-pointers and a the game-tying free throw to pace NYJC. Tan Kang Yi (RI #12) also proved clutch for the team, holding her nerve to sink crucial free throws to knot the game up. RI had the final possession of regulation to try and win the game with five seconds left, but they were not able to execute off the inbounds play.

NYJC carried the momentum that they built up in the match over into overtime. RI put up a resilient display in the extra period, creating offence out of easy passes. However, Jermaine Lim (NYJC #10) again proved to be the difference for her team, sinking what proved to be the game-winning 3-pointer with about 10 seconds left in the game.

NYJC captain Nicole Tong (NYJC #13) had this to say about the win: “Honestly, we were taken aback in the first quarter by RI. We could tell we were physically tired from the season and we had some pressure on us as a team, but we managed to pull through. What clicked for us towards the end was the expectation we had of ourselves and as a team together. We had to have the right mindset and to be hungry to fight for each ball.”