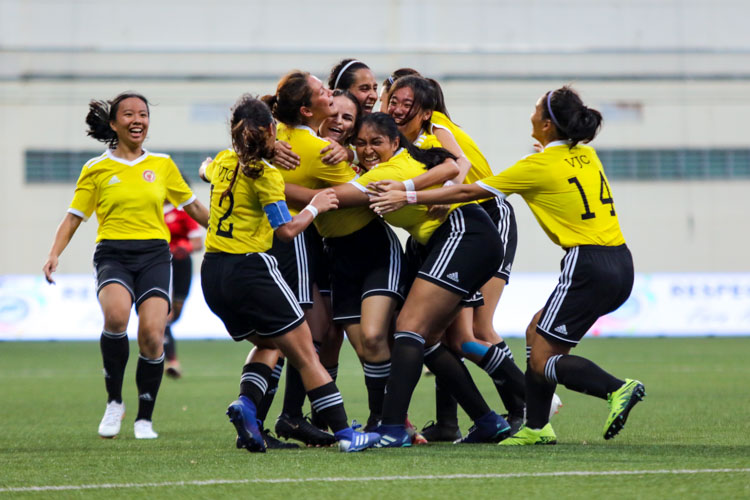 Jalan Besar Stadium, Tuesday, May 7, 2019 — Victoria Junior College (VJC) proved their prowess once again in a 3-0 win over St. Andrew’s Junior College (SAJC) in the final of the National A Division Football Girls’ Championship. This win is VJC’s seventh consecutive title after reclaiming it in 2013, following their semi-finals loss in 2012.

Speaking about the game, VJC team captain Isabelle Tay (VJC #15) said: “I felt like the match today was really good, it was one of our best matches. Everybody was playing their best and we had a lot of chances to attack, it was a really good match.”

Similarly, SAJC captain Sarah Lum (SAJC #10) said: “I feel like we gave our best for the game yesterday, VJC were strong opponents but we still didn’t give up until the final whistle was blown.”

VJC’s dominance started early in the match, with a goal by Nur Darwisyah (VJC #12) in the fifth minute of play.

Taking a shot inside the box, her goal was attempted to be palmed away by SAJC keeper Shareen Kaur (SAJC #1). However, the shot proved to be too powerful, and the the ball went into the back of the net, to the elation of the VJC team.

Just 15 minutes later, VJC found the net for the second time, but the effort was deemed to be offside, to the chagrin of the VJC players.

SAJC were unable to get out of their own half, having been under heavy pressure by the VJC attackers, who were pressing very high up in the field.

In the 29th minute, VJC doubled their lead after a fumble by the SAJC defense led to an own goal.

Nur Darwisyah (VJC #12) took a corner, sending her effort directly into the box. The ball then deflected off one of the SAJC defenders at the far post.

Team captain Isabelle (VJC #15) was in disbelief: “I was really really happy, and really proud of my vice captain Darwisyah who scored it, kudos to her!”

In the last minute of the first half, Agatha Putri Widjaya (SAJC #6) broke out of the midfield and attempted to dribble the ball down the middle. However, the VJC defense was quick to cover, clearing the ball away.

Sharing what she had told her team during the break, Sarah (SAJC #10) said: “Going into the second half, I told the team to just give it everything they’ve got and to not hold back — we’ve already made it this far and we’ve got nothing to lose.”

Just five minutes into the second half, SAJC’s keeper Shareen Kaur (SAJC #1) suffered a cramp and had to be helped off the field. She was soon replaced by her teammate, Gladys Cheng (SAJC #50).

SAJC came into the second half with more fight, stopping the VJC attackers in the midfield, and having moments to attack as well.

In the 47th minute, Agatha (SAJC #6) once again dribbled the ball under pressure from the VJC defenders, but her attempt at goal from outside the box was sent directly at the keeper.

In the 56th minute, VJC almost tripled their lead. The cross in the box by Joie Teo (VJC #10) was received by Deseree Khor (VJC #17). Unfortunately, the resulting shot was sent straight at the SAJC keeper.

Just seven minutes later, SAJC came close to scoring, with a through-ball into the box by Sarah Lum (SAJC #10). Despite the threatening ball, the SAJC players were unable to reach the ball fast enough, leaving VJC’s custodian Insyirah Maritz (VJC #24) to scoop the ball up.

Just when the game was set to come to an end, substitute Shahaf Shalev (VJC #18) stunned the Jalan Besar crowd with an amazing goal in the last minute of play.

Pouncing on a rebound, Shahaf teed herself up perfectly for the shot, sending her goal into the top left of the net, to loud cheers from her team and the crowd.

With the sound of the referee’s whistle, the final score stood at 3-0.

Reeling from the win, Isabelle (VJC #15) said: “Honestly nothing much went through my head when the final whistle blew, except maybe ‘Yes, we won!’ I was really happy.”

Adding on, she said: “Good job to my team — our blood, sweat and tears shed during Saturday morning trainings, diagonal sprints , and summits are all worth it. We really fought hard all the way till the end, and I’m proud of all of you for that!”

With the A Division season concluded, Sarah (SAJC #10) said: “It’s been such a memorable season and I’m so proud of everyone. I will never find a team as special as the one I have now, we are more than just a team, we’re a family. I really can’t wait to see what’s in store for the next batch of SAJC football. Lastly, our teacher-in-charge, Mr Koh, told us that we don’t have to be a team of extraordinary players, but together we can be an extraordinary team and I believe we’ve proven that.”