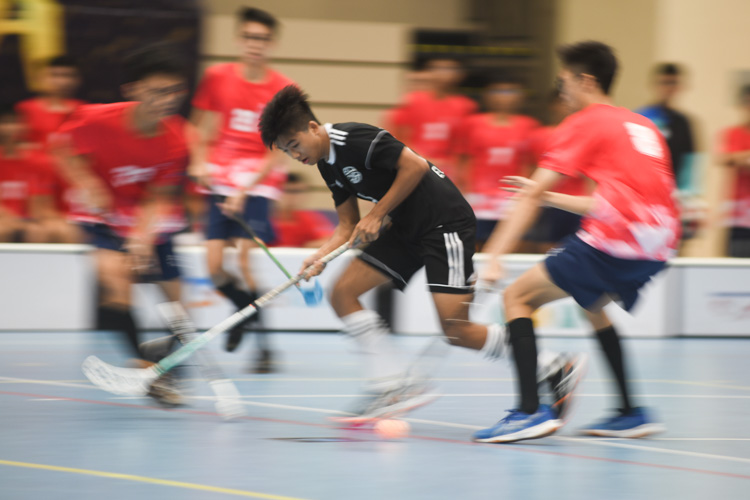 Our Tampines Hub, Tuesday, May 7, 2019 — In a clash between two first-time semi-finalists of the National A Division Boys’ Floorball Championship, dark horses Eunoia Junior College (EJC) came out tops with a convincing 6-1 victory over River Valley High School (RV).

EJC, only in their third year of conception as a school, will now contest their first ever final next week against Victoria Junior College (VJC), who upset defending champions Raffles Institution (RI) in a 6-4 goals galore in the other semi-final.

“I think throughout the whole season, the team showed that with the right mentality, we can go far,” said EJC captain Cheang Jia Qing (#83). “We trusted each other throughout every game that we’ve played, and we went hard for each game.”

Unlike the goal-laden spectacle that unfolded earlier between VJC and RI, the EJC-RV contest set off to a rather muted affair in the first period. Clear-cut opportunities were few and far in between, though EJC controlled majority of possession.

The deadlock was finally broken seven minutes in, when Edgar Kwa (EJC #14) scored his first goal of an eventual hat-trick. His shot from the left flank saw RV goalie Ari Lim (#24) fumble with the ball, which then trickled into the net. It turned out to be the lone goal scored in the first 15 minutes.

“I think today in particular, we started out a bit slow, so there’s still a lot of room for improvement,” added Jia Qing (EJC #83). “But I think as a whole, our mindset was there, we trusted each other, and we ran for every ball, and that’s what allowed us to win this game and the other games.”

Both teams stepped up the tempo in the subsequent period, but EJC proved more clinical with a further three goals. Four minutes in, Jia Qing (EJC #83) extended his team’s lead with a drag shot from midcourt that found its way into the back of the net.

RV had their best chance to pull one back when Chern Yeh Jou (#8) let fly a shot from outside their attacking semi-circle, but it was palmed away by EJC ‘keeper Raymin Pek (#1).

Then, in a quickfire five seconds, EJC doubled their advantage from 2-0 to 4-0 — Clint Tan (EJC #8) unleashed another long-range effort into goal, followed up with Edgar’s (EJC #14) second goal after a goalmouth scramble right from the face-off.

Keanen Poon (EJC #92) also went on a couple of mazy dribbles upcourt displaying his nifty stickwork, but his efforts were all thwarted by RV ‘keeper Ari Lim (#24).

With three minutes left in the second period, Louis Lee (EJC #82) received a two-minute suspension but EJC’s steady defense ensured RV could not capitalise on the power play.

EJC added another two goals in the third period via Alvan Chan (EJC #91) and Edgar Kwa (EJC #14) — sealing his hat-trick — while Lee Yew Joe (RV #6) scored a consolation for his team in the last 33 seconds to end off the game, cueing loud cheers from the River Valley faithful.

Despite the loss, the RV team seemed contented just to have made it to the last four of the competition for a historic first time.

“We are very proud, because our team has fought very hard, and we have all trained very hard, so getting into the top four is an honour,” said RV captain Guo Hongyi (#11). “I believe that everyone in our team has played very well, so it doesn’t matter if we get to the final or not.”

Hongyi maintained that his team definitely did not expect to have made it this far in the competition, saying: “Last year we lost all our preliminary round matches, so this year (the fact that) we could clinch second place in our group table, it’s very good already.”

“There was some extent of luck, but I think it’s all about the hard work that we have put in,” he added.

River Valley could certainly count their lucky stars for a favourable preliminary round draw, where the only powerhouses in their group appeared to be RI — champions in four of the last five years — whom they lost 0-8 to. RV won their other five group games as they rounded up the preliminaries with a pedestrian record of 20 goals scored and 16 conceded.

Eunoia, on the other hand, had to get past a ‘group of death’ — which also included finalists-awaiting VJC and newly-formed Tampines Meridian Junior College (TMJC), a merger between last year’s first runners-up Meridian JC and fourth-placed Tampines JC.

In a dream run, EJC topped the group with 37 goals scored and 10 conceded, with only VJC now standing in their way of a maiden championship title.

Acknowledging that a tough preliminary group has aided them in being primed for big games, EJC captain Jia Qing (#83) said: “It allowed us chances to mentally prepare ourselves, know what is to come, and how much faith we had to have for each other to actually win the games.

“It really prepared us in pushing to our limits and showing the rest of the opponents what EJ is really made of, because we know what our abilities are, and playing against all these strong teams really proved that we deserve to be in this position — to be in the semi-finals and now the final.”

With EJC and VJC playing out a 6-6 draw in the preliminaries, one can expect fireworks in the final.

“I think the most important thing for our team is to be able to trust each other even when we are down or when we are up, and to always have the right mindset throughout the whole game,” said Jia Qing, who — like the bulk of his EJC team — was formerly from reigning B Division floorball champions Catholic High.

“I think what separates our team from the rest is that our spirit, teamwork and camaraderie are really strong, and that’s what we need to prepare for the VJ game — to continue to believe in each other, really put in non-stop effort, and run for each ball until the last buzzer sounds.”