National A Div Basketball (Boys): Raffles comfortably beat CJC 66-39 to progress into next round 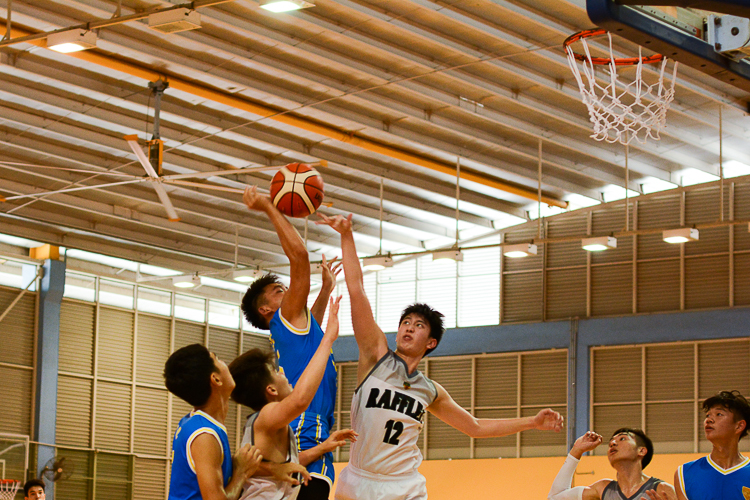 Nicholas Chang (RI #12) successfully blocks CJC #5. RI have progressed into the next round of the National A Division Basketball Championship. (Photo 1 @ Zachary Foo/Red Sports)

Singapore Basketball Centre, Wednesday, May 2, 2019 — Raffles Institution (RI) successfully progressed from Group D as the second seed into the next round of the National A Division Basketball Championship after beating Catholic Junior College (CJC) 66–39 in their final group match.

RI started the game on a 12-0 run in the first quarter, relying on an effective full-court press to generate turnovers for easy buckets. CJC had its moments when they managed to get some points on the board, but Reuben Yang (RI #24) stifled any CJC momentum by scoring six straight points to end the quarter.

The second quarter was a closer affair, as RI and CJC both struggled to make their shots in their half court sets. The bulk of RI’s points came off turnovers from running the full court press, while CJC found some success from getting to the line.

The game started to slip from CJC’s grasp in the third quarter, as RI combined slick passing and great shooting beyond the arc to stretch the lead to 27 by the end of the quarter. Bryan Teo (RI #3) helped himself to three 3-pointers in the run, while his teammates Joshua Lim (RI #7) and Chua Kai Xuan (RI #11) both added one each.

CJC put up a spirited fight to trim the lead down in the final quarter, as they limited their turnovers and settled into a groove. However, it was not enough to overcome the huge deficit and RI walked away 66–39 winners and stamped their place in the next round.

RI captain Li Chen Bin (RI #23) said: “We set a few goals coming into this match. There were a few defensive errors that we made in the previous match against HCI and we set out to improve upon them in this game. I think we did show that we are capable as a team of doing that against CJC today.”

CJC Roster
We were unable to obtain the roster for Catholic Junior College. If you know any of the players, kindly post them in the comments below and we’ll update the post. Thanks.