National A Div Basketball (Boys): DHS end season on a high with 52–50 victory over MI 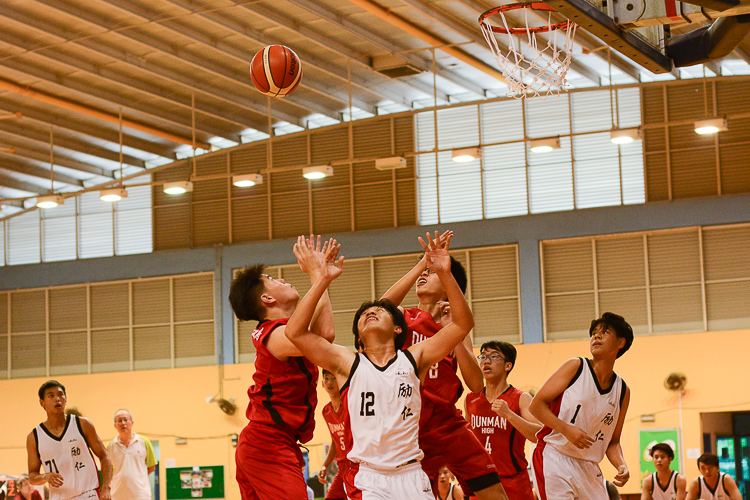 DHS and MI players fighting for position over a rebound. Both teams were electrifying to watch in a topsy-turvy affair. (Photo 1 @ Zachary Foo/Red Sports)

Singapore Basketball Centre, Wednesday, May 2, 2019 — Dunman High School (DHS) capped off their season in the National A Division Basketball Championship with a thrilling 52–50 win over Millennia Institute in the dead rubber match. With both Hwa Chong Institution and Raffles Institution securing wins in the earlier matches, DHS and MI were mathematically eliminated from progressing to the next round prior to the start of the match. However, this did not stop both teams from holding back in a thoroughly electrifying affair.

Zachary Gan (DHS #11) led all scorers with 28 points including two crucial free throws with 3.1 seconds left to ice the game. Tan Yong An (MI #10) led his team with 25 points, including a spirited 8 points in a row in the final quarter to briefly put his team in the lead.

Both teams came into the match with similar game plans, both teams fielding full court presses on defence. DHS seemed to gain the upper hand early on, starting the game with nine unanswered points. MI responded with a 6–0 run of their own, slowly finding their groove throughout the quarter and getting a better sense of the DHS press. However, MI gassed out a little towards the end of the quarter, allowing DHS to take an 8-point advantage going into the second quarter.

The second quarter was a tighter affair. DHS initially stretched the lead out to double digits, but their profligacy at the rim let MI back into the game. MI’s own full court press started to come into its own in this period, as they were able to consistently turn the ball over for easy buckets on the offensive end. MI briefly trimmed the lead down to seven points.

MI carried this momentum into the third quarter, trimming the DHS lead to three early on in the quarter. The game was very wide open, with both sides regularly initiating fast breaks off full court presses that took advantage of sloppy passing. The quarter ended with both teams knotted up 36-36.

The final quarter was a topsy-turvy affair. DHS started out on a 5–0 run to start the quarter. MI came roaring back through the efforts of Yong An and Joel Chiew (MI #71), who combined for 12 points in the quarter. Yong An personally scored eight unanswered points, briefly giving MI a four-point lead. Not to be outdone, Colin Ho (DHS #10) scored four straight of his own to knot the game up at 50-all with a minute left in the game. The crucial moment came when Zachary Gan (DHS #11) was fouled on his way to the basket with 3.1 seconds left. With the pressure mounting and knowing the consequences of his shots, Zachary (DHS #11) was able to keep his cool and calmly sank both free throws to ice the game.

DHS Captain, Jon Ho had this to say about his team’s performance: “I think that despite the odds, our team did well. It was unfortunate that our journey had to end in the first round and I hoped that we could have spend a longer time together as a team in this journey. Today’s game was well within our control, but there were lapses in our play that made it tighter than it should have been.”

MI Roster
We were unable to obtain the roster for Millenia Institute. If you know any of the players, kindly post them in the comments below and we’ll update the post. Thanks.