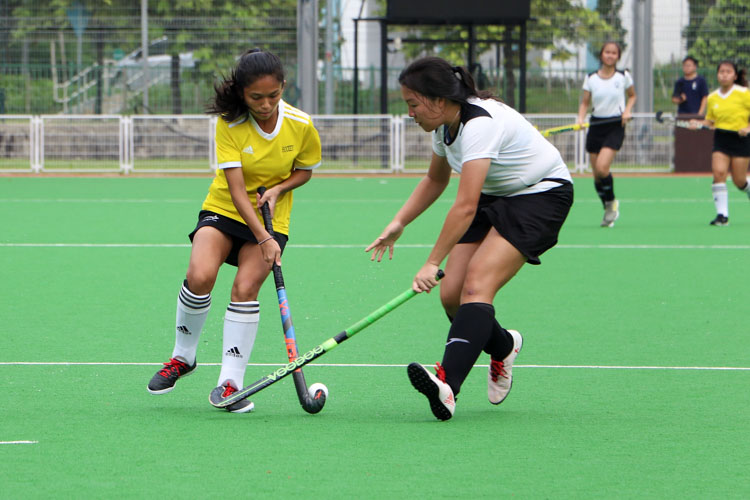 Thankful for the win, VJC captain Gabrielle Lum (VJC #14) said: “Our opponents remained relentless throughout the game and put up a tough fight against us so it was not an easy game. However, my teammates never ceased to give their all, braving through the challenges we faced in the match very well. It may not have been our best game, but I’m still thankful we emerged victorious through it all.”

The goal started off from a VJC free hit close to the D by S Shaalini (VJC #32), with Rachel Ow (VJC #21) running down the flank after receiving the lofted pass. Hitting the ball into space in front of the goal, this allowed Chow Xin Tian (VJC #5) to tun forward and simply pass the ball into goal.

In the second quarter of the game, SAJC put pressure on the VJC girls, with Chew Xin Yun (SAJC #9) using her skill to do a solo dribble down the midfield. However, her passes to space were not met by any of her SAJC team mates.

VJC almost widened the lead in the last minute of the second quarter, when they were awarded a short corner. However, the shot taken by Aces Low (VJC #13) rolled wide.

In the third quarter of the match, SAJC were offered a chance to score the equalising goal of the match, with a free hit by Arika Lim (SAJC #4). However, her shot was quickly cleared out by the VJC defense.

The last quarter saw SAJC fighting hard, in search of the equaliser. SAJC almost scored on two separate occasions, once from a short corner, and the other from open play.

However, it was not meant to be, as VJC widened their lead in the fifth minute of the fourth quarter, with a goal by Aces Low (VJC #13).

Having just narrowly missed earlier, Aces got her redemption with a clean shot that flew through the SAJC defense, landing in the back of the net.

With the sound of the referee’s whistle, the final score stood at 2-0.

Relieved by the goals, VJC captain Gabrielle (VJC #14) said: “I felt a surge of relief when the goals were scored since we really wanted to win the game — with each goal scored, we could feel ourselves nearing the victory we set out to achieve. It was difficult to penetrate our opponents’ defence so scoring a goal against them took a lot of effort, and I’m glad our hard work didn’t betray us.”

Adding on, she said: “It suddenly hit me that my team was actually through to the finals and the game that we had all been hoping to play was not out of reach anymore. It was a surreal moment for me.”

Heading into the 3rd/4th placing match, SAJC captain Germaine Koh (SAJC #14) said: “During the semi-finals, both teams fought hard and even though we were down by two goals, we persevered and gave our all throughout the game. VJ was a strong opponent but I am glad and proud of all my teammates for pushing till the very end.”

With a shot at claiming their 17th consecutive championship title, Gabrielle (VJC #14) had words of encouragement for her teammates: “Thank you for never giving up. I am undoubtedly blessed to be able to lead this team of resilient players that carry a spirit of excellence in whatever they do. This is the last game we will ever play together as a team. I believe with all my heart as long as we play together and for one another, we’ll be able to achieve what we set out to do. Let’s start strong and finish stronger.”

Victoria Junior College are set to face Eunoia Junior College on Friday, in a repeat of last year’s final. SAJC will now face Raffles Institution in the 3rd/4th placing match on Thursday, with both games held at 3pm at Sengkang Hockey Pitch.