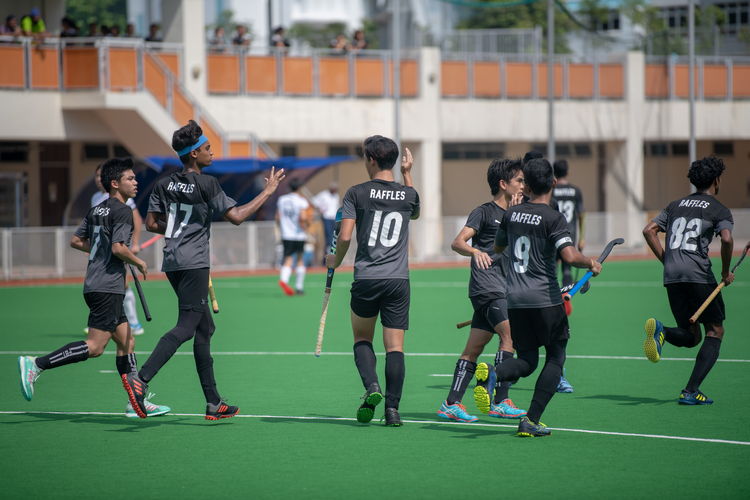 Sengkang Hockey Pitch, Monday, April 29, 2019 — Raffles Institution (RI) defeated Anderson-Serangoon Junior College (ASRJC) in a decisive 10-0 sweep in the semi-finals of the National A Division Boys’ Hockey Championship. Dominant victors, they will proceed to the final on Friday where they face St. Andrew’s Junior College (SAJC), who drew their game against Victoria Junior College (VJC) 0-0, prompting a penalty shootout which they won 3-1 to advance.

A well-placed drag flick into the top left corner of the ASRJC goal earned Alton Chua (RI #10) the first goal of the RI versus ASRJC game.

“It was a short corner,” recalled Alton. “Raziq was the one who passed, then I scored.”

Alton scored two more goals for Raffles as they scored four goals in the first quarter alone, even though they missed several opportunities to put the ball in the enemy goal. After the first quarter, they settled into a comfortable rhythm and used the other three quarters to increase their score.

Raffles captain Raziq Noor (#9) said: “I think we started off slow, with many of us not finding our touches. It took us about the first quarter before we managed to settle down. I guess in the next game, we gotta calm our nerves faster because opponents can take advantage of our mistakes at any time.”

Defending champions Raffles have yet to concede a single goal this season. Their sparkling record has brought them full circle: in the preliminaries, they defeated SAJC 2-0. They will face the Saints again in the final.

“I expect SAJC to come out hungry for the win as well. Although we have faced them before in the group stage, this game will be completely different, with a different atmosphere,” predicted Raziq.

Due to inclement weather, SAJC and VJC only managed to play roughly half their game on Monday evening. The remainder of the game took place the following morning.

“I felt that the team played one of our best games yesterday evening and today morning,” said Rizk Dagfal (#11), the VJC captain, on Tuesday evening. “However, we did not manage to convert the chances that we had and that really cost us the game. It was a hard loss to swallow having to lose out on penalties.”

On Monday evening, SAJC and VJC traded ground throughout the game, taking turns to slice into each other’s semi-circles. Shots were taken; shots were missed or blocked. It seemed like a deadlocked stalemate. The sun set to the cacophony of sticks clashing, players shouting, and spectators cheering.

Saints captain Nashwyn Singh (#6) reflected: “We had a rough start on Monday, as we were playing out of structure. This led to VJC constantly attacking and us having to make last-minute tackles.”

Tuesday morning. Exactly 41 minutes on the clock. Zero goals to each team’s name. But one thing was different.

“We managed to fix our structure and played more effectively during the postponed match. This helped us be on the attacking side as well as to put pressure on VJC,” said the Saints captain.

With their newfound organisation, the Saints pressed the attack, penetrating deep into the Victoria half multiple times. However, they failed to score against VJC, a testament to the unbreakable Victorian defense. When the last quarter ended 0-0, the umpires called for a penalty shootout.

First, deafening cheers of support, then a deafening silence, as both teams’ supporters hushed to let the keeper concentrate.

It was ultimately Andrew Chua (#16), the Saints keeper, who won the semi-final game. Deafening silence filled the air, the atmosphere so brittle it could snap. It was 3-1 in Saints’ favour.

At the whistle, VJC’s fourth penalty taker erupted into action, sprinting towards the goal, determined to score. Andrew charged out to meet him, as determined to prevent that very outcome. They met in the middle and turned this way and that way, Andrew mirroring his opponent’s movements.

Finally, the VJC penalty taker made an attempt at the goal. Andrew reached out, changing the direction of the ball ever so slightly.

But it was enough. The final shot went wide, and the small crowd of supporters erupted in cheers, the noise disproportionate to the number of people making it. For the first time since 2010, the Saints team will be heading to the National A Division boys’ hockey final.

“Hats off to SA for having a really good structure and being very organised in defense. We wish them all the best for their finals,” said VJC captain Rizk. Looking forward, he said: “For the 3rd/4th against ASR, we hope to continue the momentum we left off in the semis and be more clinical in front of the goal.”

Saints captain Nashwyn said: “We need to improve on having more effective attacks and we will work hard and aim to play at our fullest potential during the finals.”

ASRJC roster
We did not manage to obtain the ASRJC team roster. If you know the names and jersey numbers of the players, do drop us a comment.