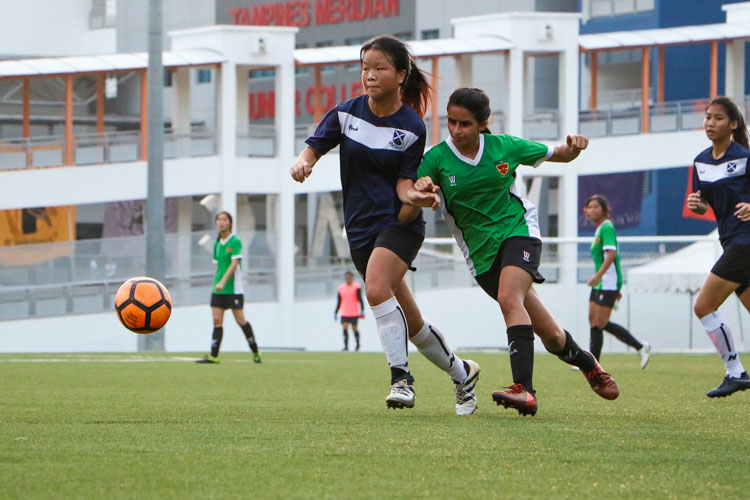 “I’m very proud of how hard my team pushed today. I knew that their injuries were hindering them from playing to their fullest abilities, so seeing them play their hearts out kept me going. But overall, I feel that it was a well fought match by both SAJC and RI. Both teams pushed really hard,” said Agatha Putri Widjaya (SAJC #6), who scored both her team’s goals.

Playing after the earlier semi-final between Victoria Junior College (VJC) and Hwa Chong Institution (HCI), the players knew the winners of this match would be set to face six-time defending champs VJC in the final.

The match started off with each side struggling to outdo the other and sustain possession of the ball.

However, the breakthrough came early in the match when SAJC’s Agatha Putri Widjaya (SAJC #6) scored a stunning goal from outside the box in the fifth minute of play.

Pushing the ball past the wall of RI defenders, Agatha found space and hit the ball in the direction of the goal. Her shot looped over the keeper’s head and into the back of the net.

Just a minute later, RI were given a chance to equalise via a free kick taken by Sofea Harris Wong (RI #11). Her free kick flew through the SAJC defense, but there were no RI players in the box.

In the 12th minute of play, RI’s Milanpreet Kaur Bajwa (RI #13) showed her skill, dribbling the ball solo from the midfield. However, a chance came begging as she was rendered offside a few moments after.

Another chance for SAJC to widen the lead came in the 22nd minute, via a corner. The resulting scramble in the box caused the ball to fly just past the post.

The rest of the half was a battle in midfield between the two teams, as SAJC sought to widen their lead, while RI fought to even out the score.

At half-time, the score stood at 1-0 in SAJC’s favour.

Sharing what was said during half-time, Milanpreet (RI #13) said: “Our coaches Mr Leong and Mr Man encouraged us to push on and get that equalising goal. He reaffirmed our first half performance and told us that we were playing well. We knew we had better possession and more shots on target, we just had to wait for them to make a mistake and capitalise on it. Our teachers were confident that we had it in us to score at least one goal so long as we continue playing with passion and forming attacks after attacks.”

The second half started off with heavy SA possession, with a free kick that was eventually deflected out by the RI defense.

However, a questionable penalty call by the referee in the 46th minute helped SAJC widen their lead in the game.

Stepping up to the spot, Agatha (SAJC #6) was set to double her side’s lead. Calmly taking the penalty, she sent her effort into the left side of the goal.

When asked about scoring a brace, Agatha (SAJC #6) said: “When I scored the first goal, I didn’t really expect it, but I’m glad I went for that goal. I felt it was crucial to bring up the confidence and spirit of my team. As for the penalty, I was just glad that I was able to remain calm and execute it according to my usual routine. I was relieved that I picked the right side. The two goals served as a much needed confidence boost for my team and I.”

In the 61st minute of play, RI almost scored their first goal of the match when Milanpreet (RI #13) laid off the ball for Nooriyah Moochhala (RI #7). Nooriyah chipped the ball over the keeper, but the ball sailed agonisingly past the far post.

Just three minutes later, RI scored their first goal of the match via Milanpreet (RI #13). Skilfully dribbling the ball in a solo effort from midfield, Milanpreet ran past the SAJC defense and drove a low ball into the bottom left of goal.

An extra three minutes of injury time were given as an injured SA player was unable to move off the pitch due to a cramp — delaying any attempts for RI to score the equaliser.

Despite RI’s best efforts to convert shots, it is SAJC who head to the final with a score of 2-1.

“It was a hard fought match from the start. Their first goal came early and it impacted the game after that. Although we dominated possession, we were unable to convert our chances when we could. When we scored, you could see the shift in my team’s energy. We had 20 more minutes to get that equalising goal and I’m really proud of how we really gave it our all and pushed hard for it, but it just wasn’t meant to be,” said Milanpreet (RI #13).

Reflecting on the match, Agatha (SAJC #6) said: “I just felt a huge wave of relief, so I just fell to my knees. It’s something I’ve been dreaming of since last year’s A Division so it really felt surreal. I was in a daze. All I could think of was how excited I was to play in the final for my CCA and school.”

With RI headed to the 3rd/4th placing match against HCI, Milanpreet (RI #13) said: “We’ve had a long journey full of ups and downs but I have always believed that we had it in us to play at Jalan Besar. Although it may not be the final, our fight is not yet over. We have one last game left to win. I want us to bring our best and leave everything on the field, and walk off with no regrets, regardless of the colour of our medal. It’s all about our desire, hard work and belief now.”

Similarly, Agatha had words of encouragement to her team: “To my team, I just want to thank you guys for your grit and tenacity throughout this whole season. We did not take in any DSAs this year so we do not have players with football background. But this just comes to prove that hard work and unity beat talent, and I’m glad we managed to prove that point this season. Moving on to the final, I just want our team to play with even more spirit and passion than today.”