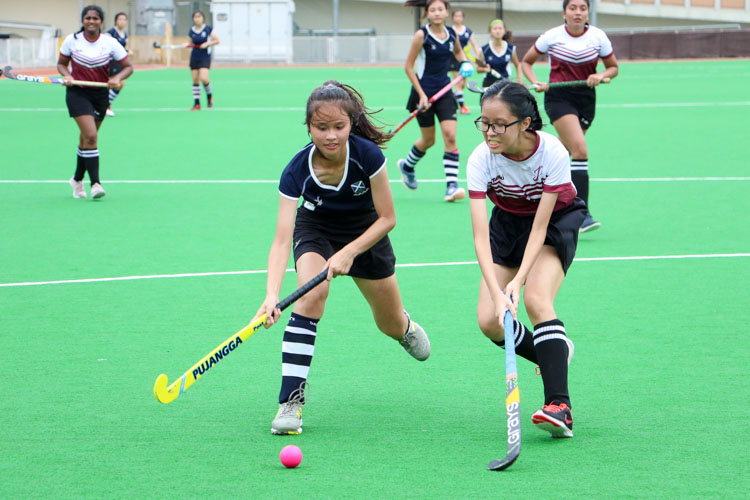 SAJC entered the game fully aware of the massive scoreline they needed to increase their chances of qualifying for the next round, with their aggression and full-force attack relentless from start to finish. However, solid defending from JPJC successfully held them back throughout the first and second quarters, keeping the match goalless at the half.

Three minutes into the third quarter, SAJC finally found their breakthrough when Chew Xin Yun (SAJC #9) dribbled past multiple defenders and found herself one-on-one with the goalkeeper. She calmly slotted the ball into the back of the net — scoring the first of her eventual hat-trick.

Xin Yun reflected: “Going into the game, we just wanted to score as many goals as possible, we were aiming to beat them by more than 11 goals… It was already the third quarter and it was still 0-0, and my coach put me as centre forward so I just really wanted to do something for the team.”

JPJC held on resiliently as they defended multiple run-ins and penalty corners by SAJC. However, towards the end of the third quarter, SAJC found a way through the defense again. In the 45th minute, Jurina Cheong (SAJC #3) found herself at the right place at the right time and deflected a long-range shot into the goal to extend SAJC’s lead to 2-0.

Barely a minute after that, SAJC found themselves in JPJC’s shooting circle again. After a major scramble, it was Denise Lee (SAJC #12) who managed to get the shot away and buried the ball into the bottom corner of JPJC’s goal to bring the score to 3-0.

In the final quarter, penalty strokes awarded in the 48th and 56th minute extended the scoreline to 5-0 for SAJC. Both penalties were calmly and accurately converted by Xin Yun (SAJC #9), completing her hat-trick.

Despite the result, JPJC put up a brave and commendable fight. Throughout the game, they defended strongly and even found gaps to bring the ball into the SAJC half.

Captain Seng Yun Xuan (JPJC #25) recognized and applauded the effort of her team, stating: “I think we started off very well, and managed to hold SA off in the first half. In the second half, because of our fitness, we started to get tired and lag behind. But ultimately I think we put up a good fight; we really stuck to the motto of ‘never quit’, and I’m really proud of the team.”

For SAJC, their 5-0 win might not be enough to take them through to the knock-out stage of the competition. As pointed out by Xin Yun, the pressure to score so many goals might have ultimately affected their gameplay, as she added: “We didn’t play as hard as we could. We definitely could’ve played much better but we just weren’t at our best today.”

SAJC will now have wait on the results of the other teams in their group to see whether they qualify for the next round . The final fixture of this group will be played on 26 April between Eunoia Junior College and Anderson Serangoon Junior College. The result of this game will determine which school makes it through to the semi-finals.