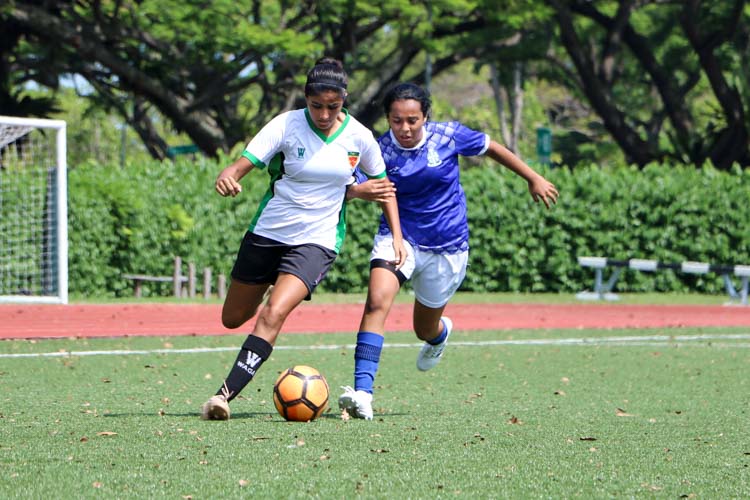 Victoria Junior College, Wednesday, April 17, 2019 — Raffles Institution (RI) scored the only goal of the match against St. Joseph’s Institution (SJI) to move on to the semi-finals of the National Schools A Division Football Girls’ Championship.

Scoring the deciding goal of the match, Milanpreet Kaur Bajwa (RI #13) said: “The match today was an important one for my team as it was a must-win for us, to keep our hopes of qualifying for the semi-finals alive.

“It wasn’t an easy game for either team considering the intense weather, but we knew we worked too hard for the past year and owed it to ourselves and each other to try our best regardless and get the full three points.”

Continuing, she said: “Going into the match, we knew we couldn’t let our fates rest on the outcome of the match (TMJC vs VJC) being played after us, so we were chasing the goal difference between us and the other potential top two teams. We may not have gotten the score we wanted walking off the field, but nevertheless we did our job and got the three points.”

The game started off intensely, with RI setting the tempo of the match. SJI were just as focused, ensuring that their formation was held well.

However, this could not prevent the goal scored by Milanpreet (RI #13) in the ninth minute of play.

The goal came from a corner taken by Sofea Harris Wong (RI #11), her effort sailing into the box. With her good positioning in the box, Milanpreet received the ball on the volley and smashed it into goal at the far post, leaving SJI’s keeper and captain Grace Tham (SJI #14) rooted to the spot.

On her goal, Milanpreet (RI #13) said: “I have never scored from a direct corner before, so when I went for the volley, I knew it was a risky one because I hadn’t had a good look on the goal behind me. Luckily for me, despite the tight angle, it flew over everyone and into the top corner.

“I was relieved that we managed to score the important first goal of the match and I could see it gave my teammates a little more confidence and motivation to push on in the game after that.”

Despite the first goal, many attempts at goal by RI were saved by Grace (SJI #14) in the rest of the first half, all the shots being aimed directly at her.

The heat of the 3pm match was obviously taking a toll on the girls — however, they continued to press on, fighting for the rest of the first half.

At the sound of the referee’s whistle, the score at half-time stood at 1-0.

SJI came into the second half a more composed team, with Nicole Lee (SJI #9) easily dribbling her way through the RI midfield and defense.

However, there was nobody in the box to receive her passes, and the ball was quickly cleared away by the RI defenders.

SJI captain Grace (SJI #14) shared what she told her team: “I think during the time-out, everyone was exhausted by the heat and one teammate almost cried while telling me how guilty she felt by missing so many passes. The whole atmosphere wasn’t really optimistic to be honest.

“We gathered in a circle and I got them to close their eyes. ‘Picture yourself in front of you. Say to her that you’re so much stronger, better than she says you are. Tell her that you’re going to give it your all. In the end the greatest enemy isn’t our opponent but yourself.'”

In the 50th minute of play, Sofea Harris Wong (RI #11) received a stray ball outside the box and took a long shot. However, her attempt sailed agonisingly over the bar.

A scare for SJI came again just seven minutes later when Milanpreet (RI #13) crossed a ball into the box. The initial ball was saved and then spilled by Grace (SJI #14). Running forward, Nooriyah Moochhala (RI #7) attempted to kick the ball in, but it was quickly collected by Grace.

The rest of the game was a back-and-forth between the two teams, either side too exhausted to make plays.

With that, the match ended with a final score of 1-0.

Sharing her thoughts, Milanpreet said: “It’s been around nine months since we last played a proper friendly against SJI so we weren’t sure of how they would play today. We had played SJI for our first ever friendly, and the scoreline of losing 0-1 to them is still fresh on my mind.

“Having them as our defining match to qualify for semi-finals felt like a full circle moment. Nonetheless, I would like to congratulate SJI for the grit and determination that they showed today. We both fought through the immense heat together and put up a good fight.”

Similarly, Grace (SJI #14) said: “I think that yesterday’s match was my the best out of the three we had thus far. In the previous two matches, everyone wasn’t too happy with our passes and performance. There were many mistakes made and there were actually a lot of chances for us to score goals.

“However, I think we worked well as a team yesterday, and we applied whatever we have been training for. A lot of my teammates suffered from the heat and felt tired. Nonetheless, it makes me so glad to say that they really pushed themselves yesterday. It was a huge team effort, we did it together.”

With RI advancing to the semi-finals, Milanpreet had words of encouragements for her teammates: “We’ve had one common goal this entire journey and now it’s time for us to show up and seize the opportunity that we have worked so hard to get.

“Regardless of what happens after this, I know I will always have friends in all of you and hope we will look back fondly on all the hours and months of training that we’ve gone through together that have made us better, faster, stronger and closer. Desire, Hardwork, Believe my friends!”

Despite the team being unable to advance to the semi-finals this year, Grace had nothing but words of praise for her team: “I would really like to thank my team for my journey during A Division. It was my team that I found something greater than myself to push on.

“We’ve been through many difficulties together, I couldn’t let them down. They were the reason why I fought hard each match. And I can’t express how thankful I am to have such a supportive team who constantly encourages each other and stands together even though we lose.”

With Victoria Junior College (VJC) winning the other preliminary group match against Tampines Meridian Junior College (TMJC), both RI and VJC advance to the semi-finals, where RI will be facing St. Andrew’s Junior College while VJC will meet Hwa Chong Institution. Both semi-finals will take place on Wednesday, April 24 at TMJC.