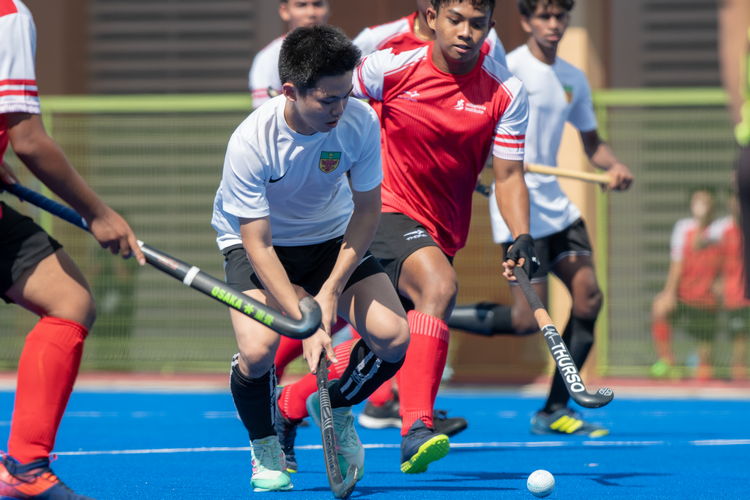 PSOEB, Monday, April 15, 2019 — Raffles Institution (RI) faced little resistance from Millennia Institute (MI), seeing them off with a final score of 10-0. With this win under their belt, Raffles made it three for three: they have won all three of their preliminary games against St. Andrew’s Junior College, St. Joseph’s Institution, and MI. All three of their games have been indisputable victories with no goals conceded.

“I think we came into this game with a strong mindset. Even though we had already qualified for the semis, we felt it was important to keep the momentum going,” said Raffles captain Raziq Noor (#9).

Raffles certainly started the game strong, earning themselves a short corner on the MI goal within the first 40 seconds. They continued to play aggressively, scoring their first goal in the eighth minute. Three more short corners were awarded to Raffles in the first quarter, but none were converted into goals.

Picking up the pace a little, Raffles scored three more goals in the second quarter to put themselves in a comfortable 4-0 position. While Raffles did manage to score multiple goals, the Millennia defenders did notably well in denying them any goals from short corners — all of Raffles’ points came from their capable attackers’ own speed and skill.

The third quarter started horribly for Millennia. In the first 20 seconds, Raffles, banking on MI’s loose formation, earned themselves a short corner, which Alton Chua (RI #10) converted into Raffles’ fifth point of the game.

“We kept to our basics, moving the ball around as much as we could, playing as a team,” recalled Raffles captain Raziq.

Not every Raffles shot made it into the Millennia goal, however. Goalkeeper Joseph Stanley (MI #20) saved multiple shots, blocking and deflecting balls that would have passed between the goal posts. In the 50th minute, he heroically saved a shot by diving on it, eliciting cheers from the onlooking Millennia supporters.

As the fourth and final quarter commenced, Millennia captain Muhamad Nasrullah (#8) urged his players to give their best in the final 15 minutes. Millennia managed to cut their losses, only conceding two more goals in the fourth quarter.

“I think the greatest thing we have to improve on is team chemistry — compared to Raffles, where we see that, well, they have good chemistry and play well together, we needed more communication,” said the tired Millennia captain. “It was very demoralizing having three or four goals in. I think that the team actually showed our spirit, in the sense that we didn’t give up even though we knew it was a lost cause.”