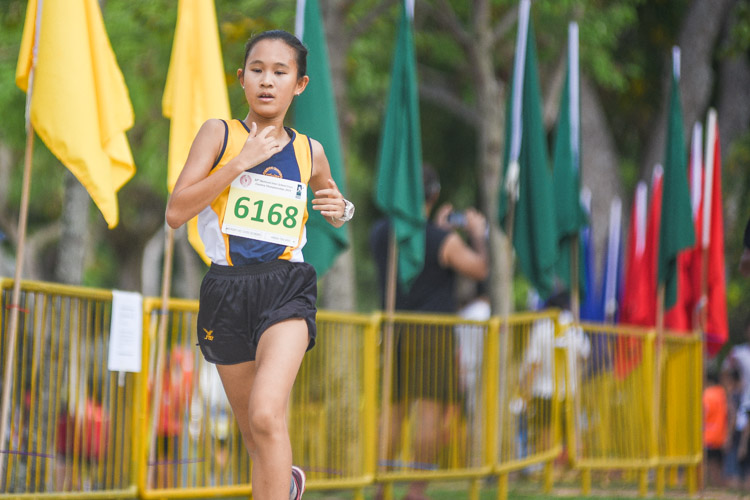 MGS secured the team championship in the Girls’ B and C divisions, with victory margins of five and nine points against nearest rivals Cedar Girls’ and CHIJ St. Nicholas Girls’ respectively. Team scores are computed by adding up the positions of each team’s top four runners, with a lower score translating to a higher ranking.

Guided by accomplished coach Steven Quek, the MGS girls’ victories are historically only their third for each division, adding to the school’s B Division triumphs in 2001 and 2008 and C Division triumphs in 2007 and 2013. This is also only the fourth time since 2000 that a school has swept both B and C girls’ titles, replicating the feats of Commonwealth Secondary in 2002 and 2004 and Raffles Girls’ School in 2015.

When asked about his recipe for success, he simply replied: “A lot of self-discipline and hard work.”

In the C Division girls’ race, MGS’ title charge was led by Hannah Tong and Alyssa Lauren Xavier, who achieved a one-two finish with times of 16 minutes 19.3 seconds and 16:30.6 respectively over the 3.8-kilometre race route.

Hannah also turned out to be MGS’ first cross country individual champion since Clara Wong in the 2009 B Division and first one in the C Division since Dawn Chia in 1998. Coincidentally, Dawn Chia had also led MGS to a one-two finish in that race.

Speaking about Alyssa and herself, Hannah shared: “We were just focusing on completing the race. We didn’t think we could maintain first and second, but I’m really glad that it happened.”

Regarding the team victory, the girls maintained that the result was unexpected as well.

“We weren’t sure if we were going to win, as we all focused on getting the experience,” Alyssa pitched in. “Also, one of our teammates, Natalie, had asthma and Megan got a torn ligament and couldn’t compete.”

Nonetheless, their teammate Natalie Lim went on to clock a time of 17:38.6 to secure 16th place, while swimmer Jessiree Kwok finished fifth in 17:08.7 to ensure MGS scored a total of 24 points, just nine better than second-place CHIJ St. Nicholas Girls’.

Interestingly, none of the MGS cross country girls across both divisions took part in last month’s National Schools Track and Field Championships — which meant that they were a team solely focused on cross country, yet also relatively inexperienced in racing.

Hannah and Alyssa attributed their success to the team spirit in MGS, a sentiment shared by their seniors who competed in the B Division.

“I believe that the team spirit was the crucial factor that led to a team victory for MGS,” said Ooi Zhewei, who secured sixth position in the B Division girls’ race with a time of 16:31.4.

“We encouraged each other whenever we feel tired, and that helped us to push through the tough trainings,” added Zhiwei, whose teammates Katelyn Tan, Charlene Goh and Erica Chan placed 10th, 12th and 16th respectively to tally their score to 44 points and edge out Cedar Girls’ by a mere five points.