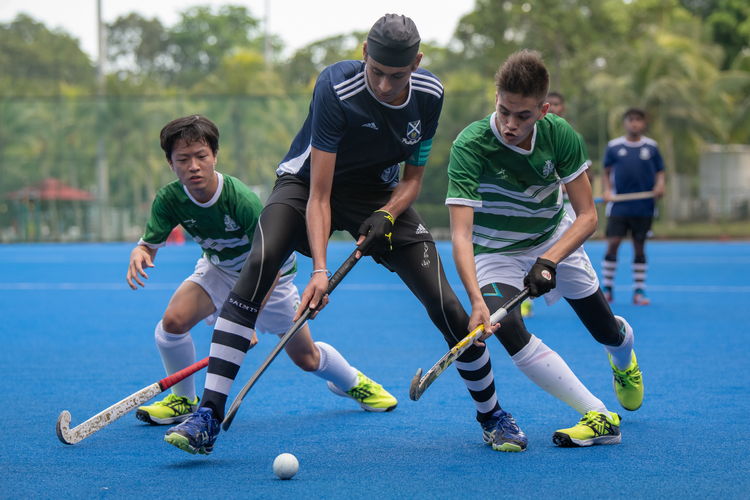 PSOEB, Monday, April 15, 2019 — The St. Andrew’s Junior College (SAJC) boys’ hockey team defeated the St. Joseph’s Institution (SJI) lineup 4-0 to secure a spot in the National A Division hockey semi-finals. While the SJI team played valiantly and never gave up, they had no choice but to reluctantly concede goal after goal to the relentless Saints attack.

“We had a slow start to the match, but we managed to pick up the momentum towards the end,” said Saints captain Nashwyn Singh (#6).

To that effect, 10 full minutes of play went by without a single goal or short corner awarded to either team before SAJC forward and vice-captain Ryu Tanaka (#7) scored his team’s first goal in the 11th minute, playing off an assist by fellow attacker Ray Au (#9).

“Ray passed the ball to me from outside the semi-circle,” recalled Ryu. “I just tapped it in.”

Another five minutes passed before the whistle signaled the end of the first quarter.

The second quarter passed by uneventfully — the “slow start” Saints captain Nashwyn mentioned. An SJI defense infringement led to the Saints being awarded a short corner in the 29th minute. Another SJI mistake made during the play immediately afterwards gave the Saints another short corner. However, SAJC failed to convert either of these consecutive corners into goals.

The first half of the game ended 1-0 in favour of SAJC.

In the third quarter, Saints managed to increase the pace of play dramatically, scoring three goals in rapid-fire succession to bring the score to 4-0.

“We positioned ourselves well defensively when SJI had the ball, and as a result we were able to intercept their passes within their half of the pitch,” said Nashwyn.

But the game was not completely one-sided. While SAJC did hold the upper hand in terms of points, SJI managed to gain possession and go on the offensive several times, on one occasion almost scoring against Saints keeper Andrew Chua (#16).

In the 45th minute, SJI earned themselves a short corner on the Saints goal, though this opportunity to score went unconverted.

In the final quarter, the SJI team pulled itself together and began to play with more purpose and organization, stopping each Saints attack in its tracks while simultaneously beginning to make deeper pushes into the Saints half. They did not, however, manage to convert any of their attacks into goals.

SJI captain James Tay (#4) said: “In the last quarter, we played with more structure. We managed to hold the ball better and we were more confident on the ball.”

This year is SJI’s first year competing in the National A Division hockey games.

“We’re a new team,” explained James. “I’m looking forward to what the future holds for our team. From what I saw during the last quarter, the future is bright.”

Saints captain Nashwyn Singh affirmed SJI’s attitude, saying they had an “admirable fighting spirit throughout the match” and “did not give up until the final whistle was blown.”