Story and photos by Julianna Jothi and Iman Hashim/Red Sports 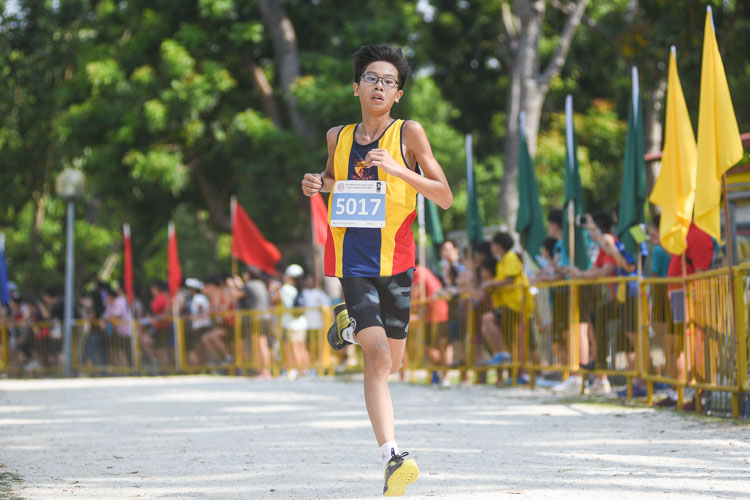 Ferrell Lee, who dropped out mid-race in the recent National Schools Track 3000m final, emerged the champion in the Boys’ C Division cross country race with a time of 13:36.8, leading ACS(I) to the team title. (Photo 1 © Iman Hashim/Red Sports)

Clocking a time of 13 minutes 36.8 seconds over the 3.8-kilometre race route, Ferrell sealed his comeback by winning the C Division boys’ individual gold.

“I felt like I failed myself, because I was so close to finishing but I fell,” said Ferrell of his 3000m outing at the track meet. “(Winning the cross country) race feels great, but maybe I could have done better.”

On what went though his mind as he was approaching the finish line, he added: “(I felt excited that) I was going to be first and I was going to make ACS(I) proud.”

Nan Hua High School’s Mervyn Ong, the track 800m-1500m champion, followed in second place about 10 seconds behind Ferrell with a time of 13:46.6 while Hwa Chong Institution (HCI)’s Jacob Tan, who won the track 3000m final that Ferrell failed to complete, finished in third place this time in 13:51.4.

“It feels great because all of us have worked hard for this,” said Ferrell.

In the B Division boys’ category, Chai Jiacheng of Raffles Institution (RI) overcame a hamstring injury sustained during the track season to defend his individual race title, stopping the clock at 16:49.9 over 4.8km.

“Leading up to this race, my training was quite inconsistent because I couldn’t really run a lot, so I had to do a lot of gym and swimming,” explained Jiacheng, who was also the track 3000m champion. “So coming into this competition, I was a little bit skeptical and not very sure whether I could win. But I just reassured myself and did my best.”

Along with teammates Hiren Koban (13th) and Sebastian Lau (21st), Jiacheng and Bhuvan led RI to the team championship with 38 points, dethroning reigning champions HCI by a 27-point margin. The win ended RI’s three-year cross country title drought across all divisions, and was RI’s first B Division team triumph since 2014.

“Actually at the last part, I almost wanted to give up because someone was overtaking me,” added Jiacheng. “But then I was just thinking that I really wanted to get a team gold also, because we wanted to take the title from Hwa Chong so they couldn’t get a grand slam (of A, B, C boys and A girls team titles).

“I’m really happy, my team did very well and I’m very happy with how they all did.”