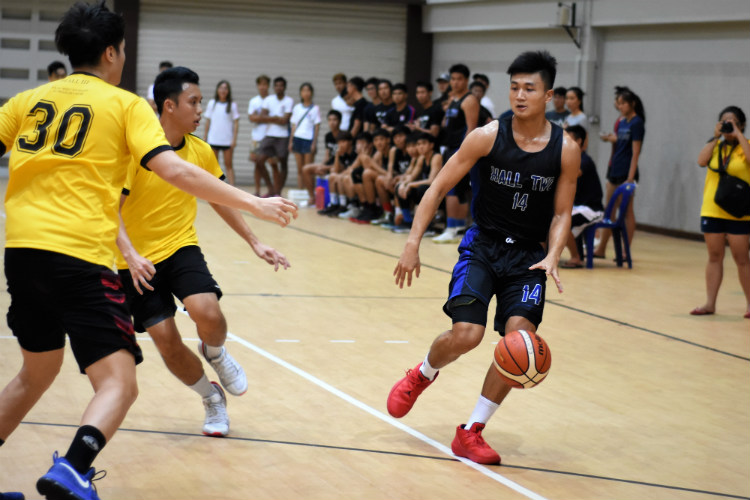 Hall 3 got off to a strong start as Liau Ming Shun (Hall 3 #11) scored a layup followed by a three from Darryl Lee (Hall 3 #30) to quickly jump ahead by five points. Hall 3 were able to play good defense to rack up on steals to go on the offense. However, Hall 2 were able to play on calmly to keep the gap small. Hall 3 led 20-16 after the first.

Making use of the break to compose themselves, Hall 2 came into the second quarter on another level of intensity. They upped their defensive intensity and was able to get several steals. They also stopped Hall 3 from scoring in the quarter as they went on a 14-0 run and were able to take the 30-20 lead at the half.

Hall 2 continued to dominate in the third quarter, they outhustled Hall 3 in all aspects and were able to get several offensive boards to allow for second-chance points. Hall 2 were too dominant in their defense and were able to capitalize on their open shots to farther extend their lead. Lyon Chia (Hall 2 #14) had a game-high 12 points to lead the charge.

In the fourth, Hall 3 attempted to mount a comeback. They knocked down their three-point shots and were able to cut the lead down to 16 but with time winding down, Hall 3 could not complete the comeback. The lead by Hall 2 was too large and insurmountable. Hall 2 were able to defeat Hall 3 eventually to secure a spot in the IHG final.

Hall 2 captain, Wil Cheng (Hall 2 #22) commented, “I guess our team got together after a timeout, we were able to gather ourselves and made sure we know what was on the line. We got everyone on the same page, kept our calm and ran the plays like we did during trainings and nature took its course. There was a shift in momentum. We were able to shut them down. We were able to adjust our defense to their offense, to know where they’re making mistakes. We also tried to shut down their strengths so that they cannot gain points. Moving forward, we have come this far as a team, let’s stay together as a team and finish this season strong and get the three-peat.”

Hall 3 captain, Ming Shun (Hall 3 #11) said, “I think we have achieved what we set out to achieve which was to have fun during the Inter-hall games. So, I am glad that despite all our commitments, we were able to come together to play this game that we love. At the end of the day, Inter-hall games are all about having fun and playing the sport together. With that, I think we have accomplished what we wanted to do.”