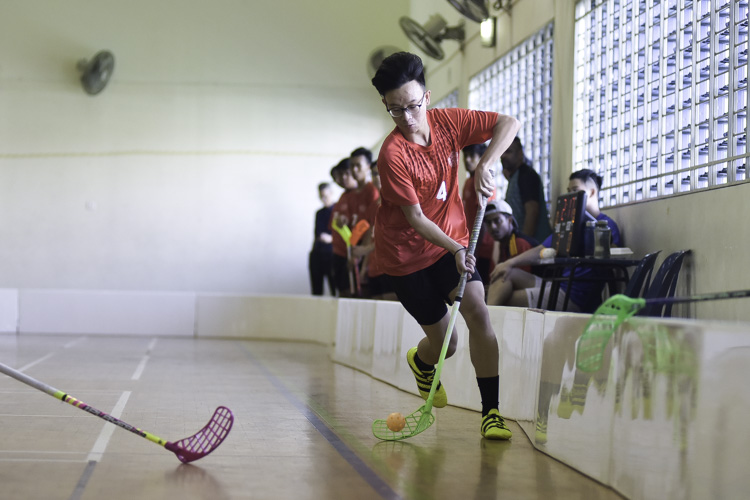 SGS’s win-loss record now stands at 2-1, whereas that of SPS has fallen to 1-2, which still leaves them with a chance of progressing to the knockout stages.

The game started at a hair-raising speed, with end-to-end action as both sides pressed high up the pitch in search of a quick opening goal.

However it was SGS which took the advantage early on, as Muhammad Khidhir Bin Mazharul Yusoff (SGS #7) drove a slap shot straight into the top right corner of the goal.

This helped open the floodgates for SGS, and they struck twice in rapid succession, with Muhammad Sheih Sy Akir B Azman (SPS #22) deflecting the ball past his own keeper, before Khidir put his team 3-0 up.

Yet SPS refused to buckle, and they retaliated with a high pressing offense of their own, with Dhamiri Zahid Bin Imran (SPS #7) and Muhammad Idham Kurniawan (SPS #19) causing real trouble with their long range shooting.

As SPS sustained this pressure for much of the period, SGS adopted a one-man defense formation to counter this, causing their attackers to swarm forward and rain shots on the SPS goal.

This tactic quickly yielded fruit for SGS, as Jared Tan (SGS #11) closed out the period with a free-hit goal leaving SGS 4-0 up at the break.

In the second period, unfazed by the scoreline, SPS came roaring at SGS. They closed their opponents down intently, causing them to lose their cool and turn-over the ball many times.

SGS took a while to find their rhythm again, but they soon began to take their chances, when first Titus Lim (SGS #9) and then Khidhir found the net with powerful drives.

Yet, in this tale of twists and turns, SGS had Paventhan s/o Kannan (SGS #10) temporarily sent off for a foul.

Paventhan was then reintroduced into the game and he made an immediate impact, tapping in from close range to give his team a comfortable 7-1 lead going into the final period.

In the third period, SGS seemed to come out suddenly revitalised, as they employed a swift, flowing, pass-and-move strategy to launch an onslaught on the opposing goal.

And though the exhausted SPS defenders put up a valiant resistance, they were powerless to prevent SGS from bulging the net five times in just a matter of minutes.

Still refusing to lie down and accept defeat, Dhamiri and Daniel Robert Howse (SPS #11) led a series of attacks down the flanks, while being cheered on raucously by their team-mates.

But unfortunately for the warring SPS boys, SGS were truly in fine form, and a combination of silky dribbling and sharp distance shooting saw them breach the SPS defensive wall a further five times in the period.

SGS captain Titus commented: “I feel we can especially be proud of our attacking play in the third period. However, we still need to work on our communication and passing.”

SPS forward Danish Muhamad Rizky Bin Zubaidi (SPS #9) observed: “Even though we conceded so many goals, I feel our defense against such a powerful team was really solid, and if we hone our attacking skills, we can get a better result in the next match.”