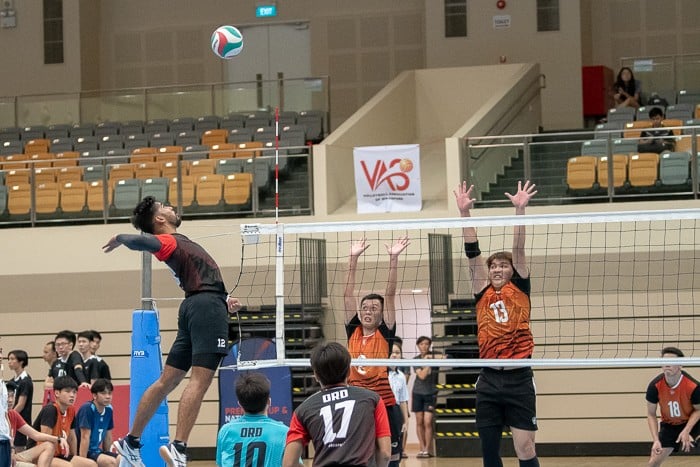 The VAS Premier Cup was run over two weekends starting from January 19 onwards, with 12 teams competing in the men’s category.

“I think we won the final because of the inseparable bonds formed between all of us, all the training sessions and team outings really made us understand one another better on the court and I think that was evident,” said Ajay Shergill (#9) of Team ORD.

“Our team spirit was remarkably strong, despite the pressure from formidable opponents… all of us really enjoyed every game,” he continued.

Even though Team ORD won the game 3-0 against Team Spaiko, the individual sets showed a far smaller disparity between the teams.

Team ORD started the first set off on the wrong foot, giving Team Spaiko a two-point lead before starting to trade points. However, by the middle of the first set, Team ORD had managed to equalize the score at 10-10.

Later, they overtook Team Spaiko in points with a 20-18 lead, but this was quickly minimized. Finally, Team Spaiko, only one point behind Team ORD at 23-24, played their best to save the set, but ultimately lost it despite their best efforts with a final score of 25-23 in Team ORD’s favour.

Said Kingsley Tay (#19), also of Team ORD: “We were able to stay composed and supported one another during both good and bad times… Each team member was also aware of the role they played and that was essential for the team to stay united and to complement one another to bring the best out of the team.”

However, in the third and final set, Team ORD maintained a solid lead from the start and was able to close out the match to seal the title.

While the team names may be unfamiliar to many, readers may recognise several players from their B Division days in school.

For Kingsley (#19) of Team ORD and Patrick Gan (#8) of Team Spaiko, this tournament was not the first time they faced each other across the net. In the final match of the 2011 National B Division Boys’ Volleyball Championship, Kingsley captained the Punggol Secondary team against a St. Hilda’s Secondary lineup which included then-libero Patrick.

In addition to the prizes presented to the top four teams, four players were recognized for their individual skill. Kingsley was awarded the Best Spiker, while his teammates Travis Ang (#17) and Sng Seng Whye (#11) received the Best Server and Best Blocker awards respectively.

However, the Most Valuable Player award went to Keith Ang (#17) of Team Spaiko. Keith said that Team Spaiko did not have the smoothest path to the final with some of his teammates struggling with injuries.

“Injuries and blocking were the biggest challenges for us during the finals. We lost a key player, Gilbert Chen (#10), during the semi-finals, and our main spiker, Ranjit (#6), was suffering from a shoulder injury and unable to play at his full capacity,” added Keith.

But the MVP of the tournament graciously conceded that Team ORD was the “well-deserved champion”.

Keith said: “I’m happy with the team as they have done their best and fought well through the competition, especially during the final. ORD was certainly better prepared and stronger this time.”