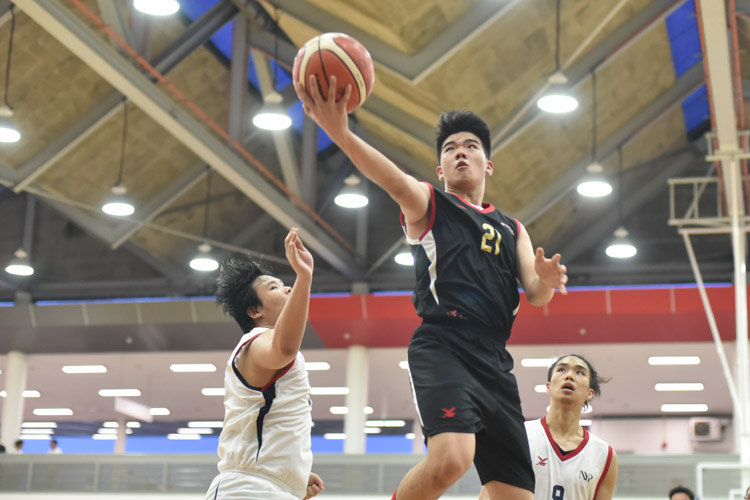 Toh Jing Bo (TP #21) rising for a lay up during the match between Temasek Polytechnic and Nanyang Polytechnic. (Photo 1 © Stefanus Ian/Red Sports)

Despite the win, the home side’s skipper Chaw Ji Keong (TP #77) said that it was not the best performance by last year’s silver medallists in a game which exposed some areas that they need to work on.

“We definitely can do better… we started very slowly and it made the other teams look at us like as if we are damn lousy,” said the 21-year-old frankly after the match.

Both teams struggled after the tip-off with turnovers and missed open shots in the first quarter. The low scoring quarter which ended 10-8 in favour of TP was perhaps epitomised by the missed dunk attempt by Kelvin Lim (TP #22), who was unable to score following a fast break by the home side.

In the second quarter, it was TP who clicked into gear first, moving the ball well and finding good open looks. With better looks, their jumpers became more accurate as well as they began to stretch their lead.

NYP, on the other hand, fought hard to stay within striking distance depending on Clive Ng’s (#9) good vision and handles which allowed him to cut in and draw defenders to himself before passing the ball to his open teammates. Combined with Andy Liow’s (NYP #14) hustle under the basket, the boys in white managed to keep the gap within a single digit.

The momentum, however, was slowly shifting to the home side as they began to find more pockets of space for mid-range jumpers and even a reverse layup by Sherman Seet (TP #11). Despite holding the lead, TP seemed unable to shift into the next gear to kill the game as they go into the halftime break with a nine-point advantage.

As the third quarter started, whatever Coach Wong Hwee Liak said to his TP charges during halftime must have gotten to them as the boys in black began to catch fire from the arc and took off. Ji Keong said this is how TP needs to play in order to win.

“For us, we are specialising in threes because we are quite small so we have to eventually shoot more than others,” said the captain.

In one play in particular, TP’s Sherman (#11) made a steal from NYP’s Clive (#9) and was driving to the basket but chose to kick out the ball to his captain Ji Keong (#77) on the wings who calmly took his 3-point shot to stretch their lead to 21 points. The lead continued to grow and at one point, the home side was ahead by as many as 25 points.

NYP tried to stem the bleed by employing a full-court press and as TP rotated their players, they managed to claw their way back slowly in the fourth quarter as they outscored their opponents 22-13. But it was eventually too little too late as TP closed out the game to stay unbeaten.

Jeryl Neo, NYP’s captain, who did not play in the match due to a lower back injury said his team was out of sorts today.

“Everyone seemed a little bit sick today,” said the 20-year-old, adding that his injury affected the team adversely as well.

NYP will need to regroup as they prepare for their next match against defending champions Republic Polytechnic on October 19, while TP will look to extend their winning streak against the Institute of Technical Education.