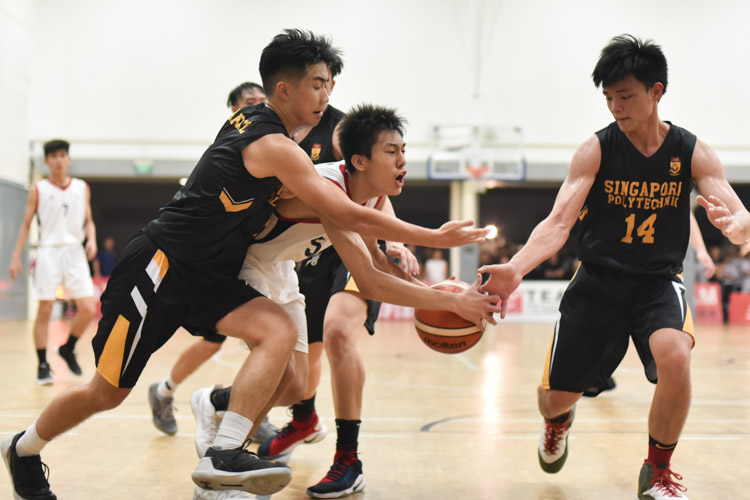 Nanyang Polytechnic’s Wong Teng Yew (NYP #5) being fouled as he drives towards the basket. He would later convert one out of two free throws to put the game beyond the reach of Singapore Polytechnic. (Photo 1 © Stefanus Ian/Red Sports)

SP still had a chance to come back even in the dying seconds of the match as both teams traded leads constantly all the way till the final buzzer. The game eventually was decided from the free throw line by NYP’s Wong Teng Yew (#5), who scored the final two points after being fouled in the final minutes of the match. For NYP’s captain Jeryl Neo (#7), the close victory was unexpected.

“Our team always didn’t have a full squad for training so we think we might lose out a lot (during the matches) because of our team’s inexperience,” said the 20-year-old student. But he said he was pleased with how the team combined together during the match.

“I think (we played with) a lot of teamwork, the bonding, we worked together as a team and it’s different from last few years,” added Jeryl.

Early in the game, NYP leveraged on their big forwards, who kept going to the basket and drawing fouls from their opponent. The boys in white scored seven of their 12 first-quarter points from the free throw line and were also dominating on the boards.

But SP was able to match the intensity of NYP’s attacks and was able to go into the half-time break in front as the scoreboard showed 31-29. The gap between the two energetic teams never got into the double digits as both teams seemed to be equally matched in the opening quarters.

It was only in the third quarter that NYP began to pull away. NYP was able to combine well in offence and moved the ball incisively to take the lead as they outscored their opponents 21-14 in the third quarter. They went into the final quarter with a five-point lead but the boys in black showed they still had some fight left in them.

The fourth quarter was an exciting one for the neutrals as the gap narrowed and it turned into a one-possession game. In a tense finish and with the scores at 62-61 to NYP, Wong Teng Yew (#5) made a breakthrough cutting into the paint and was fouled on his way to the basket. He converted one and missed one to stretch his team’s lead to 63-61.

It was then SP’s turn to reply but their offence could not find the basket in the next possession. The boys in black was then forced to commit a foul in the following possession forcing Teng Yew to the line again and he scored another free throw to seal the match 64-61 for NYP.

SP’s coach Ong Yao Kwang said his charges lacked the experience to close out the match.

“We started good but we just can’t finish the game off because I think experience-wise for the kids is not there compared to NYP,” said the 51-year-old coach, who added that about half of his team are year-one students.

On October 17, SP will play against Republic Polytechnic next while NYP will be facing the host school Temasek Polytechnic.