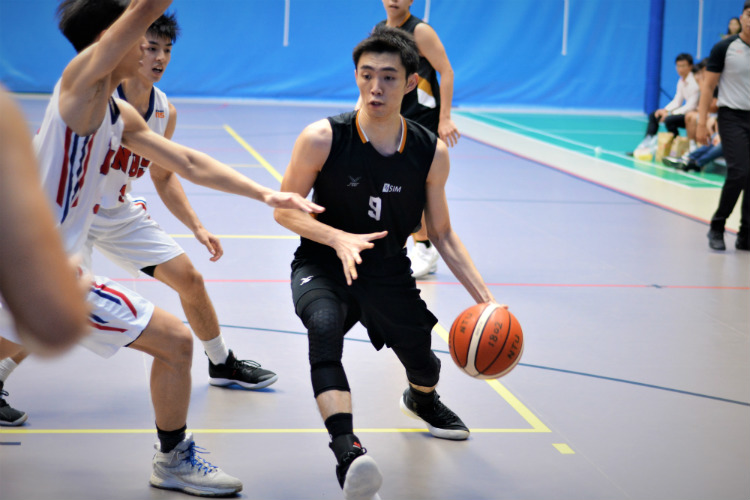 Wang Liang Rong (SIM #9) draws the defense before kicking the ball to the open shooter. He had a game-high 28 points. (Photo 1 © Low Zheng Yu/Red Sports)

This game puts SIM, NUS and Nanyang Technological University (NTU) in a three-way tie where they all have a 5-1 win-loss record. However, due to point differences, NUS emerged as the SUniG champions.

Nonetheless, it has been a while since any SUniG basketball matches went into double overtime and every part of the match left the audiences amazed at the players’ grit and determination to win.

NUS got right into action after they won the opening tip. A few quick passes and Raymond Loo (NUS #10) knocked down a wide-open three to get the ball rolling. However, Wang Liang Rong (SIM #9) answered with a three immediately.

Both sides were playing with intensity but NUS were able to keep ahead. A three-point shot by Devin Tan (SIM #0) ended the first quarter, cutting the lead NUS had down to one.

Both NUS and SIM continued to battle it out. It was a clash between titans but NUS were able to consistently stay ahead. NUS led 54-46 at the end of the third quarter.

Despite that, SIM were not bothered and continued to play their game. They kept up with their continuous onslaught of drives. The consistent driving in by the SIM offense made the NUS centers rotate over to provide the help-side defense. In most instances, SIM were able to draw the foul on the NUS centers. All three of the NUS centers had four fouls on them going into the fourth and were in trouble of fouling out.

As SIM continued to execute their offense. Clement Chan (NUS #5) and Chan Wai Hon (NUS #12) eventually got fouled out of the game. This created the chance for SIM to catch up. Without an interior presence, SIM were able to drive in more freely.

SIM took a two-point lead with less than a minute to play but NUS were unfazed. They calmly executed their play and Arno Paulus Didier Ricou (NUS #6) was able to spin and hit a layup to tie things up at 64 with 27.8 seconds left to play.

“It is one of the tactics that our coach had. He told us to go for OT as we had a chance since two of their key centers fouled out and there was only one center left,” said Ng Kian Hao (SIM #27).

With that, SIM dribbled out the 24-seconds shot clock. However, with 3.8 seconds left, NUS still had a chance to make the game-winner. A time-out was called as NUS tried to come up with a play. But, SIM was ready. They upped their defensive intensity which caused NUS to force their shot and as time expired, the game went into over-time.

NUS vice-captain, Clement (NUS #5), mentioned, “Today our centers, despite the poor performance, I am very happy to see others step up and take charge. Towards the end, as our centers were out, we lost out in the rebounds but we were still scrambling and hustling for every ball. The team spirit was there and the hustle plays we had made up for the lack of centers.”

Indeed, with their two big men gone, Raymond Loo (NUS #10) stepped up and crashed the boards to get several offensive rebounds. Lim Dao Han (NUS #24) also knocked down jumpers after jumpers, scoring all seven of the points NUS had in over-time. He knocked down a corner basket to give NUS the 71-69 lead.

However, SIM did not panic and merely played their game. Hiew Zi Jie (SIM #10) drove in and drew a foul. He knocked down two clutch free-throws to tie things up at 71. With time winding down and both sides unable to make their shots, we head into a second over-time.

In the second over-time, the disciplined Arno (NUS #6) who managed to stayed in the game without fouling finally got called for a foul and with that, the last remaining center of NUS was fouled out of the game.

Despite that, SIM were not able to capitalize. They drove in and drew fouls but could not hit their free-throws to pull things away. It was a see-saw battle as both sides made shots after shots. Raymond Loo (NUS #10) made a three-point shot to give NUS the one-point lead with 16.9 seconds left but Zi Jie (SIM #10) answered with a layup of his own to give SIM the 80-79 lead.

Knowing that, they will still be the champions, NUS dribbled out the clock. While SIM won 80-79, due to the three-way tie and point differences, NUS emerged as the champions of SUniG.

Kian Hao (SIM #27) added, “Towards the end, my team communicated more and basically we managed to hold them. From the first to fourth quarter, we didn’t really communicate well but we made adjustments along the way and we managed to hold them. I think through communication, we managed to get stops and were able to close the eight-point gap. We wanted to take advantage of their centers fouling out during the two over-time but we didn’t capitalize on the chance we had. Moving forward, I think we can work on our defense and also on our shooting as we aren’t hitting shots, especially on our free throws. Towards the end, we had some free throws but we didn’t make them. It may be due to fatigue so we probably got to work on our fitness as well. We got quite a lot to work on for IVP but I think this year’s team we communicate and bonded together. I am very proud of them that we managed to get second.”

Clement (NUS #5) remarked, ” I think SIM defended us well today. They used a zone that we weren’t very familiar in attacking so moving forward, we will definitely want to familiarize and know how we can attack the 3-2 zone. I am very proud of my team. It has been a very eventful journey from May till now. I am glad we stuck together throughout. The team spirit is very strong as you can see from the chants on defense, the encouragement for each other. The younger guys also stepped up, doing stuff that people won’t usually want to do like filling up water and getting equipment ready. These things may look small but it adds up to the family culture. So, I am very proud of them. It is my last season already and I am very grateful for the opportunity to don this jersey and play.”