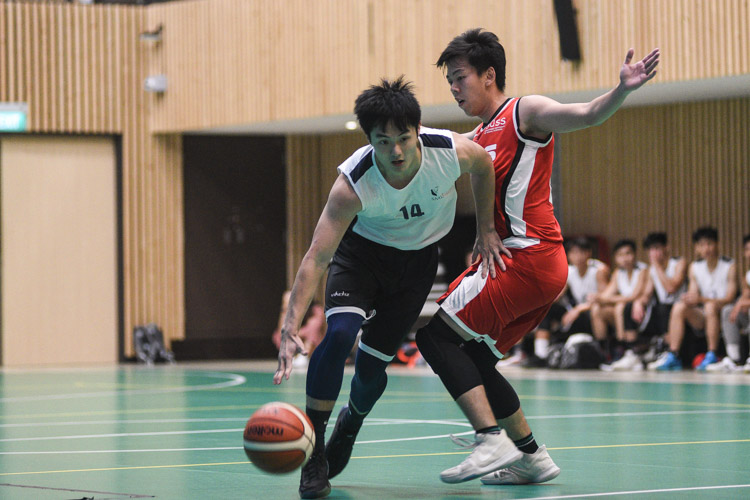 An early injury to Teo Zhen Kai (SUSS #2) in the first quarter shook the boys in red and paved the way for SMU to impose themselves and effectively kill the game in the first half of the match. The boys in white then seemed to be in cruise control after the first two quarters and could afford to rotate their players.

Despite the big win, SMU’s coach Dominic Lim remained cautious saying that his team will need to work on their focus especially when they have a big lead.

“Second half we started to let up, I told them to put like put our foot on the gas pedal, but they seem to still let up and that’s something I have to correct,” said the 25-year-old.

For the boys in red, however, the injury to Zhen Kai in the third minute was quite a blow to them after he slipped during a dribble and fell to the floor clutching his knee.

“(Zhen Kai) was one of my main players but it is what it is… it kind of hit the morale of the team,” said SUSS’ coach, Qingde Wu.

“After he is down, right, everybody was waiting for someone to do something, so it was pretty passive,” added the 26-year-old.

After a closely fought first quarter which ended at 16-13, SMU’s Peter Soo (#4) began to stretch the lead for SMU scoring six points in the second quarter on his way to a team-high tally of 14 points as SMU started to click into gear.

SMU began to leave SUSS in the dust with their quick ball movement and imposing forwards, who were dominating the boards and converting rebounds into second-chance points.

SUSS, meanwhile, was unraveling as they struggle to make their set plays as they began rushing their possession and was guilty of making poor shot selections. Eventually, they depended on the individual brilliance of Tan Long King (SUSS #11) and Cheong Wei Liang (SUSS #0), who tried their best to carry the team.

After extending their lead in the second and third quarter, SMU began to slip up in the final quarter, turning the ball unnecessarily through shot clock violations and miscommunication. SUSS also began to deploy a different strategy, implementing a full-court press and denying SMU any breathing space. This strategy coupled with their opponents’ mistakes allowed SUSS to outscore SMU in the final quarter 18-15.

With two losses and one win, SMU’s next match against Singapore Institute of Management (SIM) will be crucial in deciding where they finish in the table especially with this year’s format, which does not have semi-final or final after the end of the league matches.

While he is happy that they have recorded their first win of the season, Dominic is more focused on the next game.

“A win is a win, but we don’t want to be complacent and like fall into the trap of being too comfortable because at the end of the day we need to win the next game,” he said.

SMU will face SIM while SUSS will play against SUTD on Thursday, September 27.